Islington V2G project could be 'exemplar' for all fleets 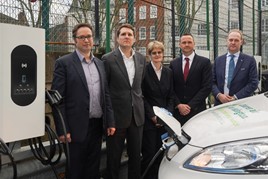 A pioneering vehicle-to-grid (V2G) project which could become an “exemplar” of how organisations can cut costs and carbon emissions across their whole operation is now live.

Islington Council has joined with Moixa, a smart battery charging software developer, and Honda, which has provided the charging technology, for the 12-month project, which sees five V2G charge points installed behind Islington Town Hall.

Moixa’s Gridshare platform will manage the flow of electricity between five Nissan e-NV200 battery electric vehicles (BEVs) – used for a variety of roles including internal mail vans and a passenger shuttle – and the town hall.

They will be charged overnight when the electricity created by low carbon sources such as wind is at its greatest and cheapest.

The software will then allow the energy stored in the vehicle batteries to be transferred to the building at times of peak demand – when high carbon fossil fuel power stations typically provide a greater share of electricity generation – cutting the authority’s energy costs and carbon emissions.

Knowing when the vehicles will be used and how long for, the software will then ensure they have enough power to carry out their daily duties.

If the trial proves successful then Islington Council, which has committed to converting its 500-strong fleet to fully electric as part of its ambition to become zero carbon by 2030, aspires to rolling out V2G to its main depot.

This would mean the 230 vehicles based there, including refuse trucks, buses and other HGVs, could be used as “phenomenal power storage” which would allow the borough to supply electricity to the local area as well as its own buildings, says Mark Smith, corporate fleet and transport manager at Islington Council.

“We won’t really have paid for this storage as we’ll have paid for the vehicles anyway which have the batteries, so on top of the £600,000 to £800,000 saving on fuel each year of going from diesel vehicles to fully electric we estimate, we could actually do a little bit of energy trading and reduce our fuel costs even further,” he adds.

“The potential is amazing. Arsenal’s football stadium is one-quarter of a mile away from the town hall and if you look at the local area when there is a football match on, you have this amazing demand for energy.

“Every takeaway and business is open, everything is turned on, so if we manage to scale V2G at the main depot then – particularly for the evening matches when the school buses are back in as well as some of the trucks – that could become a great opportunity to supply electricity to the local grid.”

While this vision may be some time away from becoming a reality, the Islington V2G trial provides an example of how the future is going to look, says Chris Wright, chief technology officer at Moixa, which is also partnering with energy technology company Flexitricity as part of the trial.

“The base load of the town hall is about 50kW and we can actually provide that from the five EVs.

“At peak, the average UK home uses about 800 watts, so you can see that we can put a significant amount of power into the grid.

“Moixa has a vision that through adding intelligence to batteries, the world can live on renewables alone, and this is both through static battery storage and vehicles with batteries.

“This project will deliver a demonstration of how electric vehicles can work with buildings through the next generation of charger technology.”

Wright says V2G may also provide the solution to the grid problems which could be caused by a wholesale transition of transport to EVs.

“There is the potential for this to really stress the grid – which is already extremely stressed in London – but if we control and manage the electricity going into and out of vehicles, then actually it can be a benefit,” he adds.

“The partners in this project share a determination to show how this can really deliver value not only for Islington Council as an exemplar for councils – and indeed fleet owners – everywhere, but there is a huge scale of opportunity as this goes forward.

“There are many tens of thousands of vehicles across councils and fleets everywhere, and we see Islington Council as a microcosm of the transitions to EVs.

“They are leading in this space, transitioning their fleet, understanding what the challenges are, and as millions of EVs are sold over the next decade, we will see that that can either be a huge problem for the electricity grid, or it can be the solution.

“It can be the mechanism that enables that transition from fossil fuels to renewables, and we are determined to show that through managing those vehicles, managing the energy that’s pushed into and pulled out of them, that will be a huge enabler of that transition to EVs.”

Islington Council fleet to be fully electric before 2030

As part of its commitment to become zero carbon by 2030, Islington Council – which has also declared a ‘climate emergency’ – aims to transition its 500-strong fleet to fully electric before then. Its fleet consists of more than 40 refuse trucks, 40 other HGVs and around 60 buses, with the remainder being cars and vans.

At the moment, around 5% of the authority’s fleet is electric but many more EVs are on order, says Mark Smith, corporate fleet and transport manager at the council.

“We’ve got more e-NV200s on order and some other cars and vans, so we are going to more than double the number of EVs we have by the end of the year,” he adds.

“We are expecting our first electric refuse truck in October and are looking at the electric 7.5-tonne market at the moment as there are now a couple of viable vehicles in that sector.”

Smith says the council is also considering retrofitting some of its existing diesel refuse trucks with electric powertrains in the future.

V2G to ‘help fleets with transition to EVs’

More than half (53%) of fleet managers feel vehicle-to-grid technology could help them with the transition to electric vehicles, research by E-Flex has found.

The V2G consortium, led by Cisco and involving partners from across technology, academia, energy and the public sector, is one of eight co-innovation projects to receive funding from Innovate UK.

Its work involves testing the real-world viability of V2G technology, the surrounding commercial models and how it may be used.

E-Flex is already working with a number of organisations including Fruit 4 London, Gnewt Cargo and Plymouth City Council to trial its V2G technology within their fleets.

The consortium’s research of 500 UK fleet managers – with an average fleet size of 73 – also found 54% of respondents believe the technology could reduce energy costs for their fleets, with the same proportion believing that investing in V2G could offset the initial cost of the EVs.

Almost three-quarters of fleet managers believe they would be able to accelerate V2G adoption if it was proven to reduce running costs (74%), business costs (72%) and generate new revenue streams (72%).

“The true commercial benefits of (V2G) technology are yet to be comprehensively proven, however,” says an E-Flex spokesman.

“Further evidence of its ability to reduce costs and supply new revenue opportunities will be required before it will be broadly adopted as a first-choice solution.”

Vehicle to grid technology has the potential to earn electric vehicle operators money, but it is not without some risks.

Company car parks and council pool fleets are among the scenarios which are best suited to vehicle to grid (C2G) electric vehicle charging, Cenex has found.