House of Commons Briefing Paper on EVs and Infrastructure 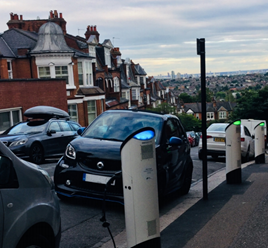 Past and current governments have supported measures to encourage uptake of Electric Vehicles (EVs, sometimes referred to as Ultra Low Emission Vehicles or ULEVs) as they can contribute to a wide range of transport policy goals.

These include improving air quality and reducing noise pollution. They may also have an important role in the ‘least cost pathway’ to the 2050 net zero greenhouse gas emission target.

However, batteries for EVs can require rare elements such as lithium and cobalt, which has raised environmental and ethical issues in countries where these elements are mined. There are also concerns over ‘peak lithium’ and future shortages constraining growth in the EV market.

The Government’s 2018 Road to Zero Strategy outlines how it will support the transition to zero emission road transport and reduce emissions from conventional vehicles during the transition. It sets out several new measures, including an “ambition” for at least 50% — and as many as 70% — of new car sales to be ultra-low emission by 2030, alongside up to 40% of new vans.

There have been widespread calls for the Government to accelerate the uptake of EVs and to phase out conventional petrol and diesel engine vehicles earlier. The Committee on Climate Change (CCC) has recommended that the market for EVs be 100% by 2035 at the latest to meet the new 2050 net zero target.

To meet the aims of the Strategy, Government is (amongst other things) providing grants to make electric vehicle ownership more affordable and to offset the costs of installing charge points in the home, workplace and on-street. Eligibility and guidance for these grants is available on for vehicle purchases here and for charge point infrastructure here.

So, how many EVs are on UK roads?

Despite the rise in the number of licensed ULEV cars on UK roads – 200,000 ULEVs were registered in Q4 2018 - ULEVs only represent 0.5% of the total number of cars licensed. According to the International Energy Agency’s 2017 EV outlook, these figures place the UK fourth worldwide by market share, and seventh by volume.

Going forward, projections by National Grid suggest that the UK stock of EVs could reach between 2.7 and 10.6 million by 2030 and could rise as high as 36 million by 2040.

Where are the EV charge points?

Data available from the European Alternative Fuels Observatory shows that the number of EV charge points per 100km of road in the United Kingdom has increased from 42 in 2011 to 570 in 2019. The Committee on Climate Change (CCC) says this figure will need to increase further to match the rising number of EVs on the road.

The Government, however, envisages most charging to take place at home describing it as a “key attraction” of EV ownership. Through the Road to Zero Strategy, the Government has committed £400m (increased to £500m at Budget 2020) to the public-private Charging Infrastructure Investment Fund and says it plans to consult on proposals that would require charge point infrastructure for new dwellings in England.

How will increasing numbers of EVs impact the electric grid?

Read the House of Commons report in full