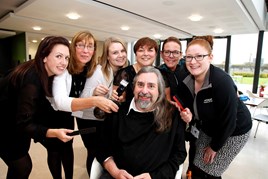 Hitachi Capital Vehicle Solutions has raised more than £2,100 for a local charity which supports Alzheimer sufferers and their families.

Raised through a number of events and sponsorships, the funds will help Alzheimer's Support Wiltshire make a strong start to 2016.

Alzheimer's Support Wiltshire provides a range of practical services to enhance life and promote independence for those living with dementia at home in East and West Wiltshire and offers support and counselling for their family carers.

Hitachi Capital set colleagues a number of challenges to raise as much money as possible, including balancing a coin on a floating lemon, guessing the weight of a colleague’s expected baby, a cake sale and a raffle. All challenges were incentivised by generous prize donations from local businesses and suppliers.

One of the most popular events which drew in significant sponsorship was the charity haircut for Andrew Beswick (pictured) who, after five years of growth, agreed to have his beard and beloved ponytail cut off. This activity alone raised more than £1,000 for the charity, while the bake sale raised nearly £300.

Katrina Leckie, senior build co-ordinatorat at Hitachi Capital Vehicle Solutions, who was behind the day’s charity event, said: “The event was a real success and staff really got involved, fully supporting this worthy local charity. A special thank you has to goto Andrew for his personal donation, losing his beard and ponytail to raise funds. The charity does some tremendous work throughout Wiltshire and I was really proud to see the amount raised and the support given by both my colleagues and the company.”

Alzheimer’s Support CEO Babs Harris said: “We were delighted to receive this donation which was a great start to the New Year. We would like to say a huge thank you to all the Hitachi Capital staff who were involved in the fundraising and in particular to Andrew for sacrificing his beard and ponytail. That was truly heroic. The money raised will support our work with people with dementia and their family carers in Wiltshire.”

Supporting the efforts were a range of local and national businesses, including Bristol Street Motors, Edwards and TrustFord, TH White Fiat, Manheim Auctions, Marshalls, Owen Peake, Robins & Day Peugeot, Phil Tull Photography, The Beauty Studio, Tale of Spice,The Champion, The Royal Oak,The Hair Company and Volkswagen. Hitachi Capital wishes to extend its sincere thanks to these companies and all who supported to help make the event a success.