Run Your Fleet to launch own contract hire product 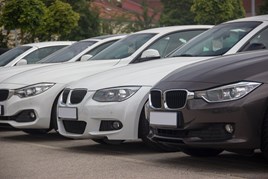 Run Your Fleet is aiming to launch its own contract hire product in April after seeing its managed fleet reach 20,000 vehicles within five years.

It has been a meteoric rise for the fleet management specialist and, having secured the funding lines required, it can now also start building its risk fleet.

Steve Whitmarsh, managing director of Run Your Fleet, said: “We estimate that 95% of our customers are outright purchase.

“It’s an ageing fleet, with an average age of about 4.6 years the last time we did the analysis.”

It suggests an opportunity for Run Your Fleet to convert existing customers from outright purchase to contract hire.

However, Whitmarsh doesn’t expect to replicate the levels of growth seen with the company’s fleet management offering.

He told Fleet News: “We’re forecasting 420 vehicles on contract hire within the next 12 months.”

Nevertheless, if that year-on-year growth continues, it could result in Run Your Fleet knocking on the door of the FN50 within the next three years.

Contract hire has historically been offered by Run Your Fleet via a third-party arrangement with Lex Autolease.

The product was good, but Whitmarsh admitted that being a third-party agreement it wasn’t necessarily a priority for the business and had only resulted in a “handful of cars” being funded each year.

However, he said: “It’s a service we should be offering to our customer base and now we’ve got the funding lines in place we will look to convert this ageing fleet.”

Run Your Fleet has secured success in the fleet management sector by targeting small to medium-sized enterprises (SMEs) operating up to 150 vehicles.

Its suite of products include: breakdown cover, service, maintenance and repair, tyres, windscreens, daily rental and vehicle telematics via its Run Your Tracking sub-brand.

Whitmarsh, a former head of fleet services at the RAC, admitted it had been a “bit tough” when he first launched the business in 2011.

Private equity funding was secured from Forward  Group, which has more than £100 million of assets under management.

It is also the majority shareholder in Fleet Hire, a contract hire company with a risk fleet of some 6,000 vehicles which is ranked 25th in the FN50.

It gave Whitmarsh the platform to set about targeting the SME sector, which he says had been largely ignored by the big operators.

“Our concept was to come up with something that helps an SME regardless of how and who you get your vehicle from,” he said.

Whitmarsh says growth has been thanks in part to the business keeping overheads low by using systems-led solutions.

“We’re a very low margin business and the only way we can make that viable is to ensure overheads are low,” he said.

“It’s a pound a month for basic fleet management and everything is consolidated into a single, monthly, rolling contract, with customers able to give just 28 days’ notice if they wish to terminate the agreement.”

It’s a precarious relationship, but five years after it launched the service, more than 98% of the fleets that opened an account with the company remain on its books.

Whitmarsh said: “It keeps us on our toes and it makes sure we’re always investing in our offering.”