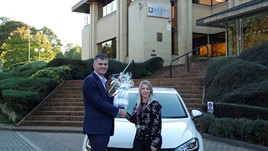 Nexus Vehicle Rental has this week celebrated its two millionth vehicle rental booking, six years after its 1m milestone in 2013.

Jolene Shaw, fleet administrator at Acorn Stairlifts became its two millionth milestone customer when she booked a VW Golf, was presented with a bottle of champagne to mark the occasion.

Acorn Stairlift’s booking means that in less than two decades Nexus’ vehicles have driven more than 750 million miles, the equivalent of four times to the sun and back.

In the last 18 months, Nexus has won more than 200 customers, including the largest fleet market contract for a major delivery company.

The business also experienced its record rental day in June of this year with 11,500 vehicles out on rent on a single day, a 62% increase on the 7,100 reported at the same time in 2017.

Nexus Vehicle Rental’s chief executive officer David Brennan said: “It’s always nice to surpass the targets you set as a business but we never could have anticipated reaching our milestone two millionth booking in the amount of time we have.

“Consumption habits are changing and we are seeing more and more customers seeking flexible vehicle solutions such as rental to supplement their mobility mix.

"By continuing to invest in our technology to meet customer demand, we are confident we can further accelerate our booking and customer numbers.”

Shaw said: “We have been a Nexus customer for six years now and have never been disappointed with the level of service we receive. Its IRIS rental booking platform provides everything we need to manage our fleet efficiently and even advises where we could save money.

“We pleased to have helped Nexus reach its two millionth booking milestone and appreciate the gift for doing so. I’m confident the business will go from strength to strength and we look forward to partnering with them for the long-term.”

Nexus’ latest landmark follows the £142m investment in the business by private equity house Phoenix Capital. This trebled the investment of the previous investor in just three years.

Nexus Vehicle Rental has processed a record number of bookings in the first half of 2018, six months after the it reported its fourth consecutive year of double-digit growth.

Nexus Vehicle Rental has updated its on-the-move offering, further developing its mobile site to help streamline the operations of its customers.