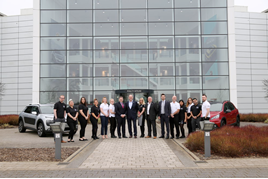 Acquisitions and mergers are the quickest way to climb the FN50 table and the latest company to take advantage of that is the PSA Group. It has brought together Citroën Contract Motoring and Peugeot Contract Hire to form a new contract hire brand, Free2Move Lease.

However, the move has been driven by the PSA Group’s desire to become a mobility provider rather than it eyeing up a top spot in the FN50.

Free2Move Lease is the first division of Free2Move to be launched in the UK. Which mobility services will follow will be determined by market demand, and some will be aimed at retail rather than fleet customers.

Free2Move Lease has also launched in France, with a central team headed by Philippe Belorgey, former CEO of PSA Finance UK. It is due to launch in Germany in March and Spain in June.

Duncan Chumley, former sales director at Citroën Financial Services, has been appointed managing director of Free2Move Lease in the UK.

He says: “In the first instance we are focusing on our core business, which is contract hire. Our focus is to use the strength of both organisations , bring them together, and to be able to create a stronger leasing company and a better proposition for our customers.”

The PSA Group began communicating the changes to its customers in December.

“Our existing websites will remain and then over time we will slowly close those websites down and replace them with our new Free2Move Lease UK website.”

Chumley has also been on a recruitment drive with Martin Hamill, former director – quality and The Academy at PSA Peugeot Citroën (and prior to that, Citroën fleet director), appointed sales director, Shane Coomber moving over from PSA Finance to become operations director and former head of Citroën Contract Motoring James Birch appointed marketing and PR director.

“We have taken people from the organisation, both from Redhill and Pinley House to form three teams: sales, operations and marketing,” says Chumley.

“The main focus was to put all the teams in one building. Previously for our B2B services they were split across used vehicles, the bank in Redhill and sales within Pinley or in the field. The new organisation brings them together under one entity based in Pinley House.”

Martin Gurney, director of fleet and used vehicles at PSA Group, has welcomed the changes, which mirror his move to create a combined fleet team.

“We now have one entity that we can work hand-in-hand with to secure fleet opportunities,” he says.

All seven account managers from Citroën Contract Motoring and Peugeot Contract Hire have been retained but they now have a wider remit rather than simply looking after their respective brands.

“It will benefit corporate customers because rather than having to see two account managers, now they will see one,” Chumley says. “We tend to find in customer relationships that someone might have a lead relationship and if we can, if that person is available, they will remain the key contact. It’s not always possible but we will try to keep consistency.”

Chumley has identified that around 9% of customers have both Citroën/DS and Peugeot vehicles on their fleet but for customers running fleets of more than 50 vehicles this rises to around 30%.

For the first time there is now dedicated residual value and service maintenance and repair management resource, rather than this being looked after by Peugeot and Citroën/DS, with the creation of new roles: a remarketing and RV manager and an SMR manager, each with a team of two people.

The brands’ used vehicle team will continue to report into Gurney. “We have a unique advantage over some of the independent leasing companies in that we sell the vast majority of our end-of-contract vehicles to our own dealer network,” Gurney says. “Our used vehicle team is effectively Duncan’s preferred supplier when it comes to the disposal of vehicles.”

This also means that vehicles can be disposed of in a “controlled manner”.

“We have an extremely robust used vehicle residual value improvement plan, part of which is all about selling better in terms of the way we sell our used cars,” Gurney says. “We are absolutely committed to selling more and more of those vehicles to our dealer network. The vast majority are sold to our dealer network but we want to engage with more of our dealers because there are plenty that don’t buy from us today. We have a strong plan in place and we’re ahead of target in terms of the percentage of Cap HPI Black Book values we set our sights on. If you assume the used car market will be fairly stable in terms of values that puts us in a positive position in terms of the residual values Duncan’s team set for the Free2Move lease products.”

A public sector team of five, including a specialist vehicles manager, has also been created.

“The majority of public sector is via tender and the disadvantage we’ve had in the past is we’ve always been tendering with one product so whenever we go to a tender we come under fierce competition from the likes of Arval and Lex Autolease who tender a variety of products, including our own. Now when we go to tender we can tender for the whole PSA range,” Chumley says.

Free2Move Lease also has the ability to be multi-marque so if a request cannot be met by the Peugeot, Citroën and DS range it will look to other manufacturers. However, only a small proportion of the fleet mix is expected to be competitor brands.

Gurney says: “We have no huge desires or plans to be taking on LeasePlan or Arval but we don’t want to be in a situation any more where we’re precluded from going for certain opportunities because we can’t fund one or two Mercedes-Benz or BMW vehicles as part of a fleet of 50, for example.”

Chumley adds: “Especially on tenders, if there are certain things you can’t achieve you don’t get the points. Our focus will always been on PSA but if there are vehicles we don’t produce we will now be able to offer a complete solution to the customer.”

Having resource that is expert in the tender process is also seen as a “huge shot in the arm”, and brings efficiencies as Free2Move has to submit only one tender rather than different tenders across the brands.

“I’d like to think it will provide us with quite a few new opportunities,” Chumley says. “We know the public sector market like PSA products. Of course, with any tendering exercise it’s a long term plan, and I’m sure competition will remain strong.

“I’ll be looking at all the products we offer, in terms of financial, maintenance, fleet management, and how we can create an offering to the public sector which we feel will be very appealing.”

Gurney adds: “It will still be a relatively small proportion of our live fleet but it’s an incremental opportunity.”

Chumley expects the SME channel to “remain the backbone” of the new business as the majority of business has traditionally been through the dealer networks.

Dealers have reacted positively to the creation of Free2Move Lease.

“They understand the marketplace very well and understand that bringing the organisation together makes sense, it brings efficiencies and they should be able to provide a better level of service to their customers,” Chumley says.  “By bringing together the organisation as one from different divisions, decisions will be able to be made quicker. Dealers will get a response quicker and, most importantly, they’ll be able to respond to their customers quicker.”

Climbing further up the FN50 table is not on the cards as the jump from seventh to sixth place is more than 54,000 vehicles and Chumley has no plans for
acquisition at present.

“Over time we’d like to grow our book,” he says. “I think it will be natural growth. Right now we’ve no plans for acquisition. It’s about continuing to grow in the right areas and developing services that customers want.”