Careers: the art of negotiation 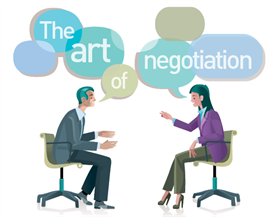 As a fleet manager in a previous life, I had the opportunity to learn first-hand some key lessons in negotiating with suppliers. During my time with Whitbread I had responsibility for managing a range of contracted services, not just fleet, including mobile phones, business travel, facilities management and even stationery.

In dealing with this range of suppliers, I developed some basic principles of negotiation that I felt worked for me:

What do I mean by ‘know your supplier’? I mean, understand what matters to them, both the person sitting across the table from you and the business as a whole. Is their key driver the number of units sold or income earned, or something else? How important is your business to them?  Knowing these facts can have a major influence on the outcome of any negotiation.

Getting to know them means being close to your suppliers and their people. Get to know some of the senior people who can make decisions – they will be more sympathetic if they know who you are.

However, also make sure you know the people who actually do the work for you – visit their offices, be seen. If your supplier and their people have a positive perception of your business, negotiation becomes a lot easier.

It is equally important for you to have a clear picture of what the potential outcomes might be – what is your ideal, what would be acceptable and what would not? Whenever I planned a meeting to negotiate a potentially difficult subject, I always had a mental picture of where I thought we might end up, based on what I knew of the other parties involved and what they might see as acceptable. I cannot ever recall getting everything I would have ideally wanted. In the real world, none of us will achieve the ideal result in every negotiation. After all, that is what negotiation is about – coming to a conclusion that is acceptable to both parties.

My final area – mutual benefit – is actually much wider than just negotiation and to me should underpin the whole relationship between customer and supplier.  A really effective relationship should be in balance where both parties feel a range of benefits. In any such relationship, the financial aspects inevitably play a major part.

However, we should never forget the softer benefits, which can balance the relationship and may help to overcome financial tensions.

One of my guiding principles was always that I wanted my company to be my suppliers’ ‘favourite customer’, on the basis that if I achieved this I would always get the best people and service, and that re-tendering and negotiation would therefore be relatively easy. I knew I had achieved this when the MD of one supplier told me: “We can’t afford to lose your business!” I was not his biggest customer, nor his most profitable.

However, our two organisations had become almost synonymous as I was prepared to be an advocate for them with prospects and to support them in developing their offering with expert help and advice. All that cost was my time – and I was always very honest, reflecting both the positives and negatives in our relationship.

These principles work for me, even now I work on the supplier side, and I would urge anyone new to negotiation to invest the time in giving them a try.

I think you will find it is worth the effort.

Nigel Trotman operated the Whitbread car fleet from 1993 to 2008. During that time he won two Fleet News Awards (in 2000 and 2008) and a Fleet Hero Award in 2007. In 2008 he switched to leasing, joining Lex Autolease as a senior fleet manager, running both the Lloyds TSB fleet and customer accounts. He has been strategic fleet consultant at Alphabet since 2010 and entered the Fleet News Hall of Fame at last year’s FN50. He is currently ACFO Midlands secretary.