Absolutely: We can deliver everything 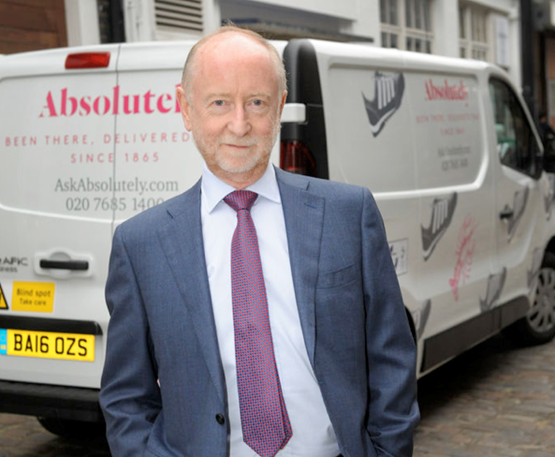 Couriers don’t enjoy the best of reputations, particularly those operating at a local level: turning up in grubby vans, throwing fragile packages over fences when no one is home, manic lane jumping to gain a few yards in the city – customer perceptions are often well-founded.

Absolutely wants to change all that. The company, which offers same-day, next-day and international deliveries as well as executive car/chauffeur services, recently rebranded its 21 trading names under the new moniker with clear objectives in mind: promote professionalism and its ability to delivery ‘absolutely everything’.

The company was established 150 years ago by current owner Jeremy Thompson’s great grandfather George, a station master at St Pancras, as a freight agent for the privately-owned railway companies. It has, says Thompson, the oldest account at NatWest’s Holborn Circus branch, with just six digits.

Thompson diversified into the courier business in 1984 when disposing of a travel business that had been set up in the 1920s. The courier operation now accounts for the majority of the £20 million revenue – 50% from same-day, 15% overnight, 15% international – with the remaining 20% from the executive cars.

“Our acquisition strategy was to maintain the old brands as trading names although our main brand was A to Z Couriers,” Thompson says. “But we got to a certain level and needed to make more impact in the London market for our size of business. To do that, we brought everything under one brand.”

He deliberately sought to forego the usual trend for names including the words ‘speed’, ‘courier’ and ‘logistics’. “We wanted a fresh approach, one which gets across our capabilities and our range of services.”

The livery tells the company stories, such as the vans featuring a lobster which relates the time when a driver rang the office to report that a lobster he was transporting had made a break for freedom and was now trapped under his seat. Or the Alsatian, which was used by a client as a size description – ‘the box is as big as an Alsatian’.

Other vans feature scissors, cheese and trainers, and a multitude of colours which reflect the London tube map.

The vehicle fleet ranges “from pushbikes to 7.5-tonne trucks – and everything in between”, Thompson says.

All drivers are self-employed, and around half use their own vehicle. The rest are provided by Absolutely, leased via its manufacturer partners’ finance houses.

The mix includes 100 cars, from Toyota Prius to Mercedes-Benz E-Class and S-Class; 110 vans, from car-derived to Mercedes-Benz Sprinters; 50 motorcycles; and 40 bicycles, including five ‘cargo bikes’ which are heavier and long-wheel base with a parcel frame on the front accommodating a box or bag.

The cargo bikes are deployed for local collections in London, replacing vans. They are both quicker and more environmentally friendly.

The cars are kept for two years on a full-maintenance package, which gives Absolutely an average fleet age of one year.

“This is important for our clients – they want newer, quality cars,” Thompson says. “It also means we have modern vehicles which have lower emissions.”

The Prius models satisfy the requirements of clients that have environmental concerns; the Mercedes-Benz and BMW models meet the demands of VIP and executive customers who expect high quality cars.

Vans are leased for three years, which enables the company to budget its monthly costs. The Sprinters make up a large proportion, chosen for their reliability.

“We have used others but we find problems, especially with the side-sliding doors. Ours get opened and closed 100 times a day; the Sprinter can cope with that,” Thompson says. “We also have Peugeot vans and the Toyota Yaris which has congestion charge benefits but we are looking at the Renault Trafic which is a good medium-size van for us.”

He adds: “We have three or four vehicle suppliers and we have built our relationship with them as we have grown. We are leasing in significant numbers which brings the price down.”

Around 150 drivers use their own vehicles, guided by strict rules. They have to be in good condition, insured and maintained. Absolutely’s fleet team, which is based out of four locations and headed by fleet manager Graham Cross, inspects every vehicle before giving clearance to carry out deliveries and also periodically checks them when drivers visit the office.

“We have no age restrictions; it’s the condition that is key, although we do also have consideration for emissions,” Thompson says.

“Cleanliness is important because it is part of our image as a professional company. The fleet team will check cleanliness inside and out, especially on the cars.”

Driver performance is dealt with during the recruitment process. Thompson only employs drivers with previous experience of couriering; it enjoys a good reputation so has no shortage of people wishing to join. Some drivers have worked for the company for more than 20 years.

New recruits undergo a series of tests, such as their knowledge of London, to gauge their suitability and are required to carry out daily maintenance and safety checks.

“As they are self-employed, it’s in their own interests to ensure their vehicle is maintained and on-the-road. This is the only way they can earn money,” says Thompson. “It’s their career and they take pride in looking after their vehicles and doing a good job.

“When we take on a driver, they commit to certain things, such as insurance, staying legal, maintaining the vehicle and keeping it looking smart. They are the face of our business.”

Consequently, incident rates are low and Absolutely does not see the need to carry out any driver training. Any prangs or crashes that do occur require an accident report to be written up which is handled by the transport department. Persistent offenders will be interviewed about the causes, although this rarely happens.

Absolutely does track drivers via their hand-held personal digital assistant (PDA), which is also the communications tool for scheduling work.

The GPS tracking system has been developed in partnership with courier software supplier DA Systems. It plots each driver in real-time and, by clicking on any individual, Absolutely’s controllers can see what speed they are travelling at and where they are. Customers can also track their parcel online.

It also records a ‘snail trail’ of their route with start/finish times which can be used to respond to customer complaints; a snapshot can be taken and emailed to the client. The controller can zoom in via a satellite picture which can be useful if the driver cannot find the delivery location.

Drivers have strict rules about what to do if someone is not in. Occasionally the contract will allow them to post the package through the letter box. In these cases, the driver takes a picture of the house which is filed should evidence of delivery be required at a future date.

Most same-day jobs are allocated the moment the assignment comes into the office. The controllers will decide which driver to send dependent on proximity and their workload – it’s a combination of speed for the customer and ensuring drivers earn enough money.

The company operates six circuits, each with two controllers plus a back-up. The ‘minimum’ circuit is for deliveries that start and finish in central London and largely consists of the bikes; two ‘out-of-town’ circuits cover work that goes out of London; two van circuits mop up the rest.

Each circuit has around 40 vehicles. On a busy day, Absolutely expects to take on 5,000 jobs, typically 1,250 from APC, 1,250 overnight, 300-400 international and the rest same-day. It also takes 400-500 executive car bookings and has more than 5,000 corporate accounts ranging from high street fashion brands to law firms.

Despite all this activity, particularly in and around London, the company does not have a problem with parking tickets. Drivers are careful where they park as they are responsible for paying any charges – unless they can show that they had no other option but to park there.

“We find that parking wardens are sensible about delivery drivers. They are understanding of the job and realise that our drivers aren’t parking there for fun,” Thompson says.

He has further ambitions to grow the company, including through acquisition – talks are on-going with at least two couriers based in London.

“We are always on the look-out for further acquisitions; we are aggressively growing the business,” Thompson says.

His team is experienced in integrating people and vehicles into the fleet. A few fall by the wayside, but most stay with the business. “They see it as an opportunity and they will generally earn more because we are a bigger fleet with more drops that make each job more worthwhile,” Thompson says.

“It isn’t difficult to integrate an acquisition into our modus operandi and our culture.”

“Our business is a bell-weather of activity, especially in the city,” he says. “If the economy is depressed and quiet, it affects our volumes.”

The run-up to the referendum in July resulted in a slow-down but, since the result, business has picked up again. Volumes are traditionally lower in August and during half-term anyway, rising towards Christmas with the growth in internet shopping.

“We have to bring in short-term hire of vehicles and drivers then, especially for the overnight business,” Thompson says.

He adds: “Our main issue is congestion. Few of our clients drive in London – they use buses or taxis with their own lanes – so they don’t understand when we say it can take an hour to drive a distance they can walk in the same time.

“Congestion is appalling with the Crossrail work, cycle lanes and volume of traffic; the speed of our vans is no quicker than our horses were 100 years ago. The only solution is to use bikes.”

He doesn’t see drones as a solution: “It’s PR more than anything else. Goods have to be delivered and they will be delivered in vans for the foreseeable future.”