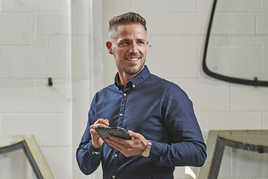 Shaun Atton has made considerable progress during his short four-year fleet management career, illustrated by the success of Auto Windscreens at the Fleet News Awards.

It’s been an impressive rise for the former apprentice technician. He is now responsible for an operation consisting of 310 light commercial vehicles and 41 cars, spending around 70% of his time managing the fleet and the rest on facilities.

Next year, the fleet is expected to grow by around 16% as the company recruits an additional 54 mobile technicians.

Auto Windscreens has made wholesale changes to its fleet operation which have resulted in improved compliance and safety standards.

Software, mileage capture and integrated telematics-camera are among the tools Auto Windscreens' Shaun Atton has adopted, cutting costs by more than £150,000.

The results from the Fleet News Awards' 35 categories announced at our summer garden party at Ascot Racecourse on July 6.