Audi: ‘Drivers talk about being treated like a retail customer’ 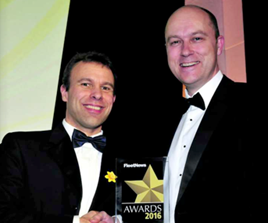 It could be argued that Audi escaped relatively unscathed from the VW Group emissions scandal. While 393,450 Audis out of a total of 1.2 million cars were affected in the UK, the German manufacturer is enjoying another strong year in the fleet market.

“Year-to-date at the end of September, we were around 2,000 units ahead of last year in true fleet,” says James Douglas, fleet sales director at Audi UK.

“Our order bank is 3,600 units up year-on-year and most of that growth has come from A4. It has just flown for us in true fleet.”

The A4 was named the best premium car at the Fleet News Awards in a year that witnessed the launch of the new Jaguar XE and a revised BMW 3 Series.

“It’s been hugely successful and very well received not just by business, but by drivers as well,” says Douglas. “It’s a fantastic product; it’s very quiet, it’s very comfortable and the tech is superb. It’s also helped us secure some sole supply deals this year.”

Audi gave fleet managers their first look at the A4 at last year’s Fleet Management Live; this year it was the Q2 which was given an exclusive outing.

The Q2 officially arrives in the UK this month, offering power outputs from 115hp to 190hp in petrol and diesel variants, with CO2 emissions starting from 114g/km.

Audi will be hoping its new compact SUV will appeal to fleets just as much as the A4, but with all-new Q5, A5 Sportback and a face-lifted A3, the wider model line-up appears geared for further success.

Fleet News: What challenges does a growing market bring?

James Douglas: We don’t have a great deal of headroom in terms of production so if the market is growing it’s not always easy for us to chase that market quickly. It’s not deliberate; the factories are pretty much at full capacity. However, the company has quite a considerable plan of expansion of factories across the world, especially in Germany which will help us in the long term.

FN: Has the market as a whole changed in terms of lead times?

JD: The market changed at around the time of the financial crash . Pre-crash there were quite a lot of short lead times in the market. Post-crash a lot of manufacturing plants wanted to take as much cashflow pinch out of their business as possible and that has led to more extended lead times.

The market has moved to where Audi already was and during that period Audi has consistently improved, and increased, its production base. But every time we increase production, demand increases.

FN: How competitive is the company car market in terms of product?

JD: The premium market has grown massively, with BMW and Mercedes-Benz reporting huge growth, but we haven’t seen them taking share away from us. I’m not 100% sure where they’re getting share from; I can only assume it’s from volume manufacturers because we’re not seeing any decline in our share. In fact, we’re winning business from them.

FN: How are you delivering that growth on the ground?

JD: We have got 116 dealerships and within those we’ve got 128 local business sales people. Above that we then have a tier of almost 30 corporate sales managers.

We have corporate agreements with 1,500 businesses, I can’t possibly run all of the sales relationships with them so I need a network to do that. Fortunately for me, my dealer network is interested in supplying and looking after fleet businesses. It means we’re extremely well geared-up for long-term relationships with real businesses.

We have quite an organic customer base and our interest is in building long-term business relationships with fleet customers.

FN: How important is that ‘local’ relationship to your fleet customers?

JD: If you’re a fleet buyer you have to make a purchase decision which you then have to live with for the next three years – good or bad.

That decision will not be based around what price the car is or what colour it was, it will be based on how well the manufacturer and the dealership look after your business and your drivers.

We spend an enormous amount of time working with the network to get behind that, but, to be honest, they have a genuinely high ethos of customer care, anyway. For example, Lex Autolease do a driver survey every year and this year their customers’ drivers voted the Audi network number one for aftersales care.

We also take part in the Expert Eye survey, with all the other manufacturers, and we finished joint top with BMW for feedback and number one for aftersales.

FN: How have you achieved that level of customer care?

You can have the best relationship you want with a fleet buyer, but if your network can’t support that once they’ve got the cars you will never sell them another car.

FN: How does Audi’s model line-up complement that customer focus?

JD: One of the reasons we’re winning a lot of solus deals is because with A1, Q2, A3, Q3, A4, A5, Q5, A6, A7, Q7 and A8 we have a complete range of cars. We have a solution for everything and, with the running costs and residual values, we can make a car work financially for pretty much every grade of fleet policy.

We’re not growing by reinventing the wheel, we’re growing by having the right product for the customer today in the marketplace and I see that continuing next year.

FN: How is technology changing your product offering?

JD: Connected cars is something we’re talking about a lot with end-users and leasing companies, because it opens a gateway for the driver to be connected not just to the internet, but anybody they want to through that connection. Whether that’s the leasing company, their employer, us or a third party who may want to sell them something, there’s a big commercial opportunity and we’re working hard to ensure the race to sell the driver something is under some kind of control.

You want the driver to have additional functions and benefits in the car, but you don’t want it to become a shop window.

I can also see the benefits for the employer and for the leasing company of being able to talk to the car. I think most manufacturers have developed their connected car technology thinking about a retail customer, but we work in a slightly different environment where you’ve got driver, employer and leasing company.

Douglas joined Audi from Nissan four years ago; a manufacturer with a plug-in pedigree not shared by the German carmaker. Nissan launched the fully-electric Leaf in 2010, while Audi launched its first hybrid, the A3 e-tron, last year and the order book for its plug-in hybrid Q7 opened in May.

Audi did however, give fleets a glimpse of things to come at the Frankfurt motor show last year, when it unveiled an all-electric concept SUV, with a range of 310 miles.

The concept car uses the power of three electric motors: one drives the front axle, the two others act on the rear, effectively creating an ‘electrified quattro’.

Douglas was remaining tight-lipped about what Audi will eventually bring to market, but the road-going model, which the SUV concept will help to spawn, will be launched in 2018.

“That’s exciting for us, because it will be the first of a family of electric products that I’ve now seen which we will be developing over the next 10 years,” he says. However, as well as fully-electric cars, the e-tron offering will also be expanded.

Douglas concludes: “Dependent on whether you’re talking about a sports car, a saloon car or an SUV, you will have different drivetrains coming through. There will be something for everyone.”