Fleet boss Henry Williams explains how Škoda chose to protect residual values by resisting the temptation to push stock into the market ahead of the WLTP deadline.

While some car brands were quick off the mark with WLTP (Worldwide harmonised Light vehicle Test Procedure), achieving compliance ahead of the September 1 deadline, Volkswagen Group has still not got all of its models approved, contributing to a fall in registrations at traditionally one of the busiest times of the year.

Škoda suffered a 31% decline in September (compared to 55% for Volkswagen, 53% for Audi and 36% for Seat) but head of fleet Henry Williams puts a positive spin on it, pointing out the brand’s core fleet models (Octavia and Fleet News Award-winning Superb) are “up and running”.

“From a Superb perspective there is only one engine that we haven’t got at the moment, which is the 1.6-litre diesel,” he says.

“The 2.0-litre diesel, which is the bulk of our volume, has been up and running for some time. It’s Kodiaq and Karoq (another Fleet News Award-winner) which are slightly later.”

By the end of this month, 90% of Škoda’s range will be available (up from 65% at the start of October) and Williams, perhaps surprisingly, contends this is “on plan”.

“We knew 12 to 18 months ago the details of WLTP, when it was coming on particular models, and we were able to plan our volume through the year on that basis. So we’re bang on plan for what we want to do this year,” he says.

“What we definitely didn’t want to do, which isn’t true of everybody in the market, was have excess stock running into the end of August. The August market was really large and that’s because several manufacturers were pushing hard to get rid of stock because they couldn’t derogate them.

“We made a conscious decision early on, because we didn’t know about derogation at the time, to say ‘we are not going to carry stock and have a fire sale in August’.

"Our focus is on residual values (RVs) and we need to maintain a really strong RV position. It makes everything else work for us, and makes a lower cost for our customers ultimately, so we did that on purpose.

"We knew for this year realistically we’d be down on volume versus last year but that’s intentional because of the challenges around WLTP.”

Škoda’s fleet customers are now “coming back on board”, Williams says, and order take is marginally ahead of this time last year.

He is also keen to point out that while some competitors have experienced “sizeable increases” in CO2, Škoda has had only a modest rise (for example, the Superb 2.0-litre diesel has an NEDC-correlated figure 1g/km higher than under the old NEDC test regime that WLTP replaced). 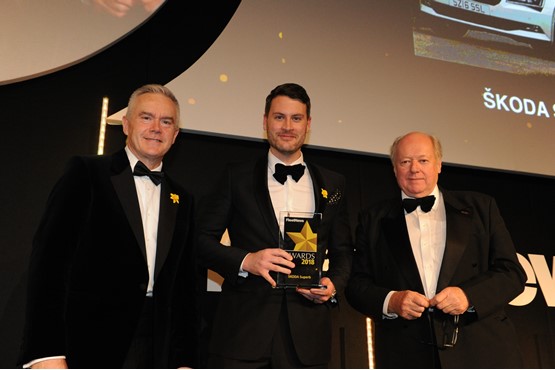 Fleet News: What are your average lead times?

Henry Williams: I’m not seeing any particular extension of lead times at the moment, but I’ve also made sure we have a buffer of stock available because of the changeover to WLTP.

You might find a derivative that has a certain option on that is longer than the norm, but, in general, I’m not seeing extensions to lead times. We are currently working to 12 weeks average on our core fleet line-up.

FN: Will you consider removing options and having fixed trim levels like Seat has done with Easy Move?

HW: It’s interesting and you can see the benefits of that. We’re always looking at how to reduce complexity. How do we make the customer offer easier, better?

I think as we go forward, especially with WLTP and RDE 2 (Real Driving Emissions step 2), where you have options, it really does make sense.

We’re always looking at rationalising the offer, especially on some of our bigger models where we have a lot of derivatives. We did that with the SE Technology range to a certain extent.

Could we go further? Possibly. We never turn our backs on anything that could help the customer.

FN: How is Karoq performing in the fleet market?

HW: Where we are with Karoq is where we were with Yeti at this point year-to-date (Karoq’s fleet sales are 5,216 with total sales of 10,171). Yeti did really well for us. Karoq can do a lot better for us if we can get the production through.

FN: What feedback have you had from fleet customers on the Karoq?

HW: There are two groups of customers for the Karoq. One is the people who took Yeti previously because of its off-road capability. What Karoq does is add that off-road capability into a slightly bigger car with a bigger boot and, of course, the styling and the latest technology.

Then you’ve got the people who are maybe coming out of hatchbacks, estates or other SUVs into it and love it because it’s a Škoda offering that now really works for them.

FN: What are your fleet sales expectations for the rest of 2018?

But it’s not growth for growth’s sake for us. It’s about long-term, sustainable growth of key segments and key models with our customers coming on the journey with us.

HW: We’ll probably be at 1,000 at the end of this year realistically. We grow by 150 a year. We ended last year with 850 and we’re already at 950, and those are mostly major corporates, that’s where our focus is – and growing our local business proposition. The challenges of the brand we had when I started in this role are definitely going away.

FN: What place does diesel have in Škoda’s future?

HW: You’ve seen the diesel market drop quite a lot but actually from our side on fleet we haven’t really seen that. Our big corporate customers still need a car with the kind of miles per gallon diesel offers.

Having said that, we’ve got a couple of big customers who run job-need cars, for example, who are looking at the 1.0-litre petrol engine on Octavia instead of the 1.6 TDI.

They’re doing direct comparisons between the two and actually finding the 1.0-litre petrol is fairly comparable in terms of fuel consumption, CO2 is fairly consistent, the RVs now on petrol cars have come up and the initial price – the RRP – is lower than a diesel so it can work for some major customers.

Petrol technology is improving and offering another alternative, so the future is choice.

You will be able to choose the power transmission for the vehicle you want based on the exact requirements you have for that vehicle in your fleet.

FN: Škoda plans to have 10 electrified models by 2025, starting with the Superb plug-in hybrid next year. What can we expect from your EVs?

HW: The Superb plug-in hybrid is quite a strong proposition for a number of reasons.

First, in terms of size, the Superb gives you a lot of practicality already, it’s got plenty of space to store the batteries.

Second, the technology is the latest generation that we don’t really see from many manufacturers today so you get a real range on the car on electrification-only, which is where hybrids start to work. It will have a real world range of just below 50 miles.

Then we’re introducing the fully electric Citigo, late 2019, realistically January 2020. It’s another foray into electric cars before we go mainstream with our fully developed, ground-up battery electric vehicles, which Vision E (concept car) will be one of.

Our research shows anything over 200 miles is where you get taken very seriously by customers because that is a defining level of range and we will be offering a 300-mile range (with Vision E).

Williams says 2019 will be a “huge year” for product for Škoda, with a range of cars which will “move the brand forward”.

In addition to the facelift of the Superb and Superb plug-in hybrid, Škoda will launch a new hatchback (Scala) to rival the Volkswagen Golf and Ford Focus, as well as a small SUV (currently termed Vision X) to take on the Nissan Juke.

“Our cars are always the largest in the segment. One of our selling points is that we’re practical. This new hatchback comes bang in the middle of the segment, and it’s the latest platform (MQB A0), the latest design, the latest technology so it’s going to be a strong product for us and give us an area of the market we haven’t had before,” Williams says.

“We’re filling some of the gaps we have had in our portfolio up to now, so the future is bright.”

Skoda is introducing Virtual Cockpit to the Karoq, Octavia, Superb and Kodiaq ranges.

Skoda’s new Scala small family car will be available with five petrol and diesel engine variants when it goes on sale in the first half of next year.