Fleet dealer of the year: A good reputation and the right offer are key to TrustFord progress

Find out what the Fleet Dealer of the Year, TrustFord's business growth, the impact of it's leasing hub in Bradford and plans for the future following the Fleet News Awards. By Jeremy Bennett

Build it and they will come, is the movie-inspired phrase used by TrustFord fleet and commercial vehicle director Mark Wilkie as he reflects on successive years of growth for the business since he joined in 2014 to head the operation.

Total annual sales have grown by a third in that period, but he stresses success has been based on “getting the offer right” and being the best in the business with volume growth coming as a bi-product.

TrustFord is the world’s largest dedicated Ford dealer group, with 60 dealerships in the UK.

Its winning entry in the 2018 Fleet News Awards was based on five key attributes: the focus on customer care, based on having the right staff to meet their needs with training at an induction academy from two days to two weeks, dependent on the role; the unmatched scale and infrastructure; its industry knowledge and expertise; the Ford product; and the operation’s longevity in the fleet market.

Here, Wilkie sheds light on these pillars of success in the business. 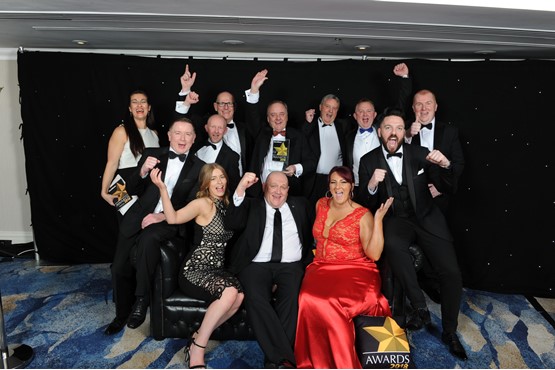 Fleet News: Is there a continuous drive for growth at TrustFord, or are there limits to the scale of the business you are targeting?

Mark Wilkie: We haven’t deliberately gone out to grow volume, but we have tried to be strong and successful at what we do and the volume has come as a result.

We want to be the best in the business and so have invested a lot of money in infrastructure and our people – and worked closely with leasing companies to get our offering right.

And, let’s not forget the influence of convertors, such as Tevo and Bri-Stor, as some customers come via them.

We get a lot of business on our reputation. We’re not chasing a growth target every year, but with fleet representing such a significant part of the business there is, naturally, a desire to grow in the sector.

FN: When you started in your role did you know how you would grow the business or have you learned along the way what needs to be done?

MW: Most of my background had been in operational dealer management. I was initially asked to act as a caretaker for my current role while it was under review.

In the period before getting the job full-time we did something potentially risky which was to ask for our customers’ opinion of us and how they would like to be dealt with.

The major learning was coincidental to what was already happening in the group. On June 1, 2014, the group rebadged as TrustFord. Prior to that we had been known through a whole range of names.

We didn’t appear to operate to the scale we were doing. From a national fleet point of view, one name worked as a brand and many customers didn’t want to continue talking to multiple contacts, but rather a hub and spoke relationship, with one central contact, which we organised internally.

FN: In late 2015 you opened a leasing company hub in Bradford. What has been its impact?

MW: It started as a pilot with three people. It now has 10 handling all leasing company communication for the group which has made us significantly sharper in response times, evident in our service level agreement (SLA) scores.

Three years ago, we were taking about two hours to respond. The benchmark now is less than half an hour, but we achieved an average of 14-16 minutes for a personal response by adding capacity in the hub in 2017.

FN: During your time in the role, how have you seen fleet’s requirements change and what are the decision-makers most concerned about?

MW: There’s been two aspects. First, fleets want to have conversations about aftersales as opposed to product and price – and they want to have it through a single relationship at a senior level.

We have strong product and we’re competitive on price, but of concern was our ability to minimise downtime. We’ve got aftersales resource in my team, our mobile servicing operation now has 10 Smart repair vehicles and an expanded fleet of 17 servicing vehicles for on-the-spot repairs.

And under the name ‘Twilight Servicing’ many sites are open for extended hours in the week and open over the weekend.

Second, future drive lines is a major concern – what is going to power our vehicles? We’ve not seen any massive move away from diesel following the press controversy last year and it will continue to be the fuel of choice for the foreseeable future.

But some fleets are looking at petrol, particularly those operating in cities with smaller vans, but not in great numbers.

Ford of Britain is running a plug-in hybrid electric vehicle (PHEV) Transit Custom trial in London with some of our major customers and that might feature in the range, following on from Mondeo PHEV which is available now. Longer term, we might see electric alongside PHEV.

And discussions on fuel type take place often alongside transmission type since, in the past 18 months, many of Ford’s commercial vehicles have become available as automatics, opening up delivery markets to us as fleets define the transmission and fuel requirements based on a vehicle’s application.

FN: How has the relationship between leasing companies and end-user fleets been evolving?

MW: Very frequently there will be a leasing or fleet management company involved in a decision around a transaction. It’s increasingly unusual for an organisation to just asset purchase a vehicle. Even if they are just purely funding there is a relationship involved somewhere.

It’s important for us to remember that, while we traditionally look after the end-user, the leasing company is writing the cheque. This helped inspire the creation of the central leasing company hub as we wanted to manage both relationships to best of our ability.

Our nine business centres manage the end-user relationships and the hub deals with the leasing companies, with two teams working together on the same accounts.

FN: What opportunities lie untapped in the business that you are working on now?

MW: Much of the effort is on improving the customers’ experience, improving communication and on them having more visibility on the lead and delivery times of their vehicle and knowing where it is in the process online, regularly and in almost real-time.

We’ve got to have conversations with customers about the appropriate level of visibility for the leasing company, fleet and drivers.

We’ve come to this conclusion by assessing not only what is happening in fleet and retail around visibility, but the broader digital space. Purchase tracking is normal in other markets, so how can we translate the expectation into our business? We hope to introduce the changes this year.

We also are always looking to new markets. The increase in automatic transmission vehicles is an example.

Wilkie and Ford are acutely aware of the pace of change in the fleet market and the pressures put on fleet decision-makers to understand the complexities to benefit both the companies they work for and the drivers in their charge.

Wilkie says he’s aware more drivers are being offered a cash-for-car allowance putting them in the personal lease market, so it’s become a key area of growth for Ford.

And while a decline in commercial vehicle sales is unlikely, Ford’s ‘last mile’ solution at March’s CV Show showed how electric self-driving vans and drones collect and deliver goods in city centres, as restrictions on access by traditional means seem more likely.

Wilkie says Ford Motor Company will position itself as a provider of mobility, not just vehicles.

So, Ford owns a San Francisco-based start-up, the London Chariot, and is supplying it with 14 Transit minibuses to take people on the first and last mile of their commute in areas underserved by public transport, booked through a smartphone app.

Ford is at the forefront of investigating alternative approaches, a mindset matched by TrustFord.

TrustFord and BCA has renewed its remarketing partnership for a further two years.

TrustFord is celebrating being placed on the Sunday Times Top Big Companies to Work For 2018 list for the second year running, climbing two places to 20th.