A top-down focus on becoming the most environmentally friendly company in the world is behind the push towards a ‘green’ fleet at Panasonic Europe.

However, self-confessed electric vehicle (EV) nut and senior manager at Panasonic Jason Plummer has been instrumental in establishing a fleet policy that ensures the right employees are driving the right cars for their individual requirements.

“I am very passionate about EVs, but I’m not a tree hugger,” he said.

“It’s about making the right decisions for Panasonic, but also the employee. Having an EV does make people’s lives better; you save money to do other things.”

The company uses CO2 as its key performance measure for its worldwide fleet, and each territory is expected to reduce vehicle emissions every year.

Plummer evaluates emissions using a combination of manufacturer figures and calculations from Panasonic’s mileage capture process, which last year gave its UK fleet of 163 cars an average CO2 of 106g/km, falling from 119g/km in 2015.

Employees who drive plug-in vehicles can recharge them at the company’s head office in Bracknell with the aid of solar panels.

But the commitment to reducing emissions goes much further than vehicle choice. For example, the company has extended its video conference systems and has also installed them at some key customers and suppliers.

This has reduced mileage, given staff better communication tools and given them back time, as has an ‘agile working’ policy which allows office-based staff to consider working from home. Removing the journeys to and from the office has made a big difference to mileage for some employees. 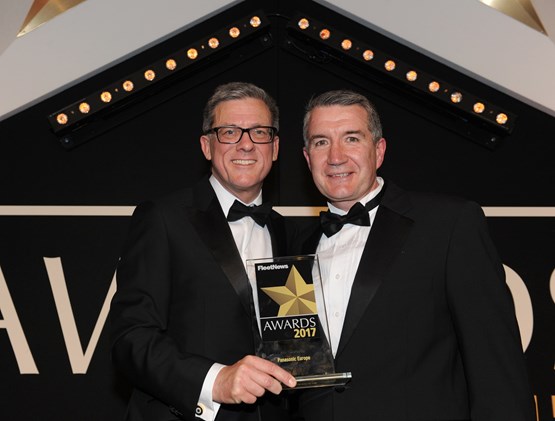 Fleet News: Why is being green so important to Panasonic?

Jason Plummer: It goes back to the founder Konosuke Matsushita in 1918. He set out Panasonic’s seven business principles and one is co-existence.

We’ve just launched our latest green credentials and a new vision for 2050.

The vision is for everything we do as a business to be completely carbon neutral by 2050.

FN: How does your fleet compare with other Panasonic fleets around the world?

JP: The UK is far in advance of all European countries when it comes to charging points and plug-in hybrid uptake.

Our European counterparts lag behind significantly, but a lot of what we have been doing is being transplanted over there.

It’s created quite a lot of competition. Every year in March we collect all the emissions data from across Europe which creates a league table.

We are currently at the top of that. However my counterpart in Poland is changing all cars to one particular model which will end up reducing their CO2 significantly.

It’s more difficult for us as we have a four-year replacement cycle.

FN: What is your current target?

JP: The only target we have in the fleet is around reducing CO2 of all the vehicles we have; getting them down to the best they can be – where the infrastructure allows.

FN: How long has fleet been under pressure to be green?

JP: We started this about five years ago when the average CO2 emissions for the fleet were between 160g/km and 170g/km.

FN: How has alternative fuels helped your company reduce emissions?

JP: We have 20 plug-in hybrid cars on the fleet at the moment, with four charging points. We have a small community that allows us to charge all the cars in one day.

Several of us drive Mitsubishi Outlanders and getting the average miles per charge up is kind of a bragging thing, people want to say they have managed more than 30 miles on battery.

You have to get people to engage. These types of cars are very beneficial to people from a tax point of view, but that isn’t necessarily the right thing to have if they do a high amount of miles.

We have a process we go through to ensure people have the correct infrastructure to ensure they can use the car in the correct way. It’s case by case.

They have to have a charging point and a percentage of their journeys must be less than the charge of the battery.

FN: Can you continue to reduce CO2 emissions?

JP: I think it’s going to become more and more difficult, purely from a real-life testing point of view.

I think in the short term CO2 will probably level out – I don’t want it to go up.

We’ve got a number of vehicles that are still relatively high CO2 and it could well increase in the future if real world emissions are much higher.

As real world testing comes into play we will have to change, or at least consider changing, our policy to ensure there are still suitable cars on the list.

You have to be careful though, it could be an excuse to bring cars into the policy that aren’t in there at the moment.

We will need to monitor it very closely to make sure we make a decision that doesn’t adversely affect our carbon footprint.

FN: What effect did removing fuel cards have on driver behaviour?

JP: It actually changes people’s mentality around fuel costs dramatically. Because the money is coming out of their pocket it suddenly becomes a big issue.

We have people where it has changed the way they drive their car. We had people getting 40mpg on their fuel cards, they are now getting 50-60mpg.

They now shop around. There is no longer an issue with supermarket petrol and nobody is going to a motorway service station, because it impacts them.

They are looking to buy the most cost-effective fuel where they can maximise the benefit to them and to the company.

FN: What fuel do you believe is best for the future?

JP: We previously had a diesel-only policy but a lot of the smaller petrol engines will actually give you really good fuel economy.

There are a lot of questions around diesel at the moment and I think the smaller petrol three-cylinder engines may be become the norm.

I think the game-changer for electric cars could be the Tesla Model 3. I just think it’s an EV that somebody will want to drive and looks like an attractive car – a lot of people don’t want to look different.

The other interesting fuel is hydrogen. The technology is there and it’s possible. I think that will be the ultimate future.

I think the batteries are an interim and I don’t know how long that interim will be, you will run out of the resources at some point.

Plummer is concerned that more and more drivers are looking for alternatives to company cars because the taxation is getting higher each year.

He also feels there is a lack of information available to help him fully advise a driver on what car will be the most cost-effective over a four-year cycle.

But he keeps the car list as open as possible, with only the CO2 cap limiting choice.

“I’d like to think that we lead this going forward, it’s something we are really keen on.

"Our European counterparts are a bit slow on the uptake but it’s something I am passionate about and certainly has the passion engaged from our CEO,” he said.