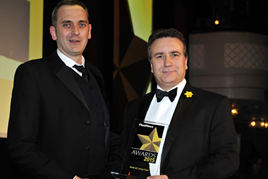 Holdcroft Group found itself victorious in a David and Goliath battle last year: a 19-site dealer network taking on the might of some of the country’s largest leasing companies.

The battleground was the process by which the Government’s plug-in grant could be claimed. And the stakes were high, with the company potentially putting hundreds of thousands of pounds of current and future business at risk.

“It became apparent very quickly that we were given a process to work to from the Office for Low Emission Vehicles (OLEV) via Mitsubishi, but the leasing companies didn’t want to or couldn’t work to that process,” he says.

“Part of the process is you have to produce two invoices, one for the car because the grant is applicable only to the standard car, and one for anything additional, such as delivery or metallic paint. We were delivering cars and sending two invoices and the leasing companies were sending them back saying ‘no, send us one invoice as our systems can’t cope with two’.

“I’d tell them they had to change their systems as OLEV said I had to do it this way, and that put me at risk of losing business because I was becoming difficult to deal with as I wouldn’t conform to the leasing company’s processes.”

At one point, Holdcroft refused to deliver an order because the grant forms were not correct.

He adds: “If the grant form isn’t correct, who loses the £5,000 grant? It won’t be the leasing company, it’ll be the dealer and they can’t afford to lose the £5,000 grant multiplied several hundred times. That would put companies out of business.”

To resolve the confusion, Pearson contacted OLEV and emailed a one-page simplification of the issue. “It took five or six weeks for its legal team to approve the wording of the process,” he says.

“I sent this out to the leasing companies who I deal with and they had to change their processes.

“I have to protect my business and if this is how OLEV says it is, then this is how it is. It doesn’t matter if you are the biggest, the second-biggest or the third-biggest leasing company in the country, you still have to follow Government process.”

He adds: “It’s something that if I didn’t stand up and put my head above the parapet for, nothing would have got done and lots of dealers would have been at risk.”

It was this willingness to lead the industry which helped Holdcroft win the fleet dealer of the year category at the Fleet News Awards, combined with its investment in improving its service to fleet customers.

Fleet News: How important is fleet to Holdcroft Group?

Malcolm Pearson: We took the decision six or seven years ago to embrace fleet and invest in it properly instead of just paying lip service to it because manufacturers wanted us to look at that area. We decided that we were going to do it right and hopefully it would pay off later down the line, which is what is happening now. The first couple of years were spent building: we built the infrastructure, we built the PDI centre, we bought our car transporters and changed our processes and our strategy. This got us into a place where we could sell to local businesses and leasing companies and give a consistent level of service.

FN: Has the growth in fleet business matched your expectations?

MP: It’s been better than we expected. We’ve doubled the number of fleet customers in the past few years and registrations have followed: this year we budgeted for a 20% increase in fleet sales compared to the previous 12 months, but we’re on track to almost double last year’s registrations. They say fleet is jam tomorrow. You do your work, you make your investment and a couple of years down the line you start reaping the benefits, which is where we’re at now. In the recession we were one of the few dealer groups to invest and grow its fleet department while a lot were looking to reduce staff across their businesses, and maybe cut back on their fleet teams. In the recession, retail registrations stopped more or less straight away while fleet sales kept going for another year but were the last ones to return to growth. Now they have returned and other dealer groups are enjoying an increase in fleet business, but we are probably benefiting from an increased share of that rise which we would not have done if we hadn’t invested as we did.

FN: You spent more than £1 million on a dedicated fleet PDI centre. What other areas have you invested in?

MP: When I joined six years ago, we had five people in the team: we’ve now got 34. Part of that growth has come in the past six-to-nine months, during which we’ve changed the management structure. Whereas everybody reported to me before, I now have four managers to look at deliveries, orders and quotations, and administration while somebody else looks after the sales team, which has allowed us to increase our focus on fleets. We’ve grown our sales team, taken more people on and ordered another seven-car and two-car transporter because, if our fleet sales volume continues to grow and we don’t add another transporter, our percentage of driven-to-trailer deliveries will drop. To keep this high we’ve invested £250,000 in the two trucks which arrive in September.

FN: More than 90% of cars you supply to fleet customers are delivered to them on a transporter. How important is this is to your business?

MP: Fleet customers are no different to anyone else: they still get very excited at the arrival of a new car. It gives them a much better experience if it is delivered on a brand new transporter, with the driver dressed in branded corporate wear. This, in turn, leads to better customer scores and the better the score, the more orders we get from leasing companies. Using transporters has other benefits for us, too. By fully utilising them we have saved money on fuel in driving cars to customers as we can take five, six, or seven vehicles at a time, which is also greener as we’re reducing our CO2 emissions as well.

FN: Holdcroft Group has representatives on several leasing industry boards. What benefits does this bring?

MP: One of the main benefits is that it improves communication regarding products and issue resolution. It helps us understand the leasing companies’ business better, they tell us their problems and we can then provide them with ideas and solutions. For example, we got asked last week to help a manufacturer which is reviewing how it does fleet. Being on these working parties gets us seen as a company that wants to help our leasing customers and put forward ideas and suggestions rather than just take, take, take. The leasing companies can see that we’re not in it for ourselves – we want to give back a little bit as well.

As well as the Fleet News award, Holdcroft Group was last year named fleet dealer of the year by Fleet News’s sister magazine AM, but has no intention of resting on its laurels.

“All the major leasing companies give us quarterly service level agreement scores on areas such as enquiry response time and accuracy and, the higher up you are in those tables, the more orders you get because those businesses want to reward the dealers who look after their customers,” says Pearson.

“The leasing companies use the scores to look at consistency of service over a rolling 12-month period, so it’s vital we maintain our focus on keeping them high.”