Skanska’s safe fleet award win was in recognition of its comprehensive approach to risk management, which includes measuring commuting incidents in accident statistics.

Skanska leaves no stone unturned in its mission to improve fleet safety. All drivers, including grey fleet, undergo online risk assessments, while commuters are also included in its incident statistics.

The company plays a key role in a number of industry organisations including the Transport and Logistics Safety Forum organised by the Chartered Institute of Logistics and Transport, the Fleet Operator Recognition Scheme (FORS) governance group and the Construction Logistics and Community Safety (CLOCS) working group.

It is this all-encompassing approach which has seen the civil engineering company named as safe fleet of the year in the Fleet News Awards for the second consecutive year.

“We don’t want people to be less safe just because they are not doing a work journey," says Alison Moriarty, Skanska fleet risk and compliance manager.

"Although the commute may not be a business journey in the official sense of the word, it’s still just as important to us that both our employees and members of the public are safe.”

Between 2015 and 2016, the company saw its incident rate – including commuting and personal use accidents – fall by 11 percentage points.

This reduction is even more impressive when the types of incidents recorded are taken into account.

“It is company policy that no matter how minor an incident is, it’s got to be recorded through our accident management company, hopefully within a matter of hours,” says Moriarty.

“We want people to report everything because even if it’s just a scratch or a chip, these things accumulate over the lifespan of a vehicle and when the lease terminates you can find you’ve got a lot of damage needing repair that you didn’t know anything about.

“We want people to get in the habit of recording incidents, anyway, because sometimes what can be seen as a minor incident might be part of a pattern that may cause something more serious further down the line.

“It can help identify training needs for drivers, or even an issue with a type of vehicle, and if you don’t record them you are not picking those up.

“It may be something where you get very slow speed manoeuvring incidents in a van and it may be because the visibility out of the rear of that van isn’t very good, which would lead you down the path of thinking, well we need reversing sensors on these vehicles.” 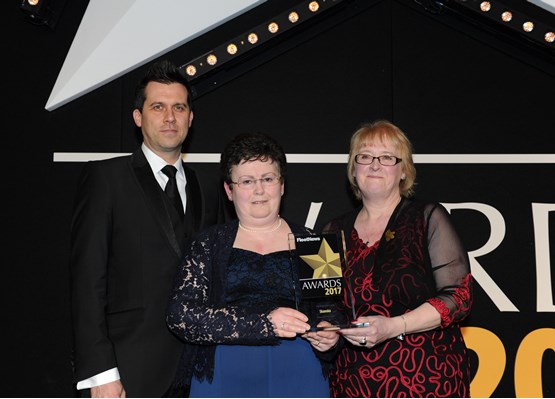 Fleet News: How do you identify risk?

Alison Moriarty (AM): We use a number of methods. Our van and car drivers, including grey fleet, do an online risk assessment which identifies a number of training modules they have to do.

There is a total of 26 modules, but most people have to do up to six or seven. These are mandatory and must be done within a certain length of time.

Our Jaama Key2 fleet management software system follows their progress and automatically reminds us if the modules haven’t been done.

The risk assessment also identifies a number of modules which may benefit the drivers but are discretional to do. We find most employees do those as well because they quite enjoy them.

We also monitor the endorsements people get. If, for example, a driver gets two speeding endorsements within 12 months, we will usually contact their manager and say ‘it’d be good to put this guy on one of our speed awareness courses’.

If that driver then chooses to do a speed awareness course with the police we will cancel ours, but we are trying to keep an eye on why people get endorsements and then put training in around it.

FN: How often do you check employees’ driving licences?

AM: Our commercial vehicle drivers have their licences checked every three months, while the car drivers are done every six months unless they’ve got more than six points and then we do it every three months as well.

Our drivers sign a mandate that lasts for three years, so the frequency gives us a level of comfort.

Endorsements affect our drivers’ risk profiles, so our fleet management system is set up so that if a driver is in danger of going up a risk profile level then we automatically get an email so we can have a look to see why.

FN: What role does telematics play in your fleet?

AM: We’re rolling telematics out across our commercial vehicle fleet and it is being used to monitor behaviour and performance, including harsh braking, cornering, speeding and idling.

We’ve also got a system that runs alongside it to do the risk profiling and this gives us fantastic dashboards that we send out to managers.

This is the most significant thing we’ve done this year because we know all the telematics data is being analysed before it goes to the drivers’ managers and it’s made people use the data properly.

We’ve seen really good results with our incident rates and fuel usage so far. As an example, one of our highways contracts is quite a difficult one because of the types of vehicles they drive and the types of driving involved.

Once they got the dashboard, their manager started talking to drivers around events and they saw a huge reduction in collisions and fuel usage. We are really excited about that.

FN: Do you use telematics in your car fleet?

AM: We are starting a three-month trial with 20 drivers using an app. We’re hoping to use it as part of a risk tool so, instead of putting it in everybody’s car, we are going to use it with drivers who have been identified as high risk.

However, what we have found is that people are already volunteering to use it who aren’t high risk.

They are looking at it as a way to reduce fuel consumption as well as wear and tear, so even people who take a cash allowance and use their own car find that it works for them.

The drivers can turn it off at the weekends if they want to, but almost everyone who took part in an earlier trial left it on the whole time.

We’re looking at using an app instead of installing hardware into cars mainly because of the HR issue around data protection for car drivers: a commercial vehicle is not for personal use, whereas a company car is a much more emotive subject.

Skanska is also keen to spread the road safety message beyond its employees, and has so far trained around 40 members of staff to be ambassadors of road safety charity Brake.

“We’ve got two training sessions coming up soon, so that will probably increase the number to about 60,” says Moriarty.

“They do work in the community, so we go into schools and we do work with cubs in the evenings and weekends to help them get road safety badges, which has been really good fun.

“This year we’ve launched a Brake ambassador newsletter which is published every quarter. For that we ask the ambassadors to tell us what they have been doing so we can note all the good work that is going on.

“We also give them safety tips, let them know what’s happening in terms of new legislation and talk about incidents that may have happened.

“It’s really an all-encompassing way of keeping them up to date with all that’s going on in the world of fleet and things they may not come across in their normal jobs.”

Having complete business buy-in at all levels was key for Alison Moriarty, fleet manager at Skanska, to improve the safety of her drivers.

Skanska has a holistic approach to running a safe fleet. It identifies the gaps and finds the best solutions. In addition to its own strong track record of reducing incidents, Skanska is also active in the wider market in helping other organisations to improve the safety of their own fleets. Comprehensive and admirable, said the judges.