Spotlight on Police Scotland: Electric at core of fleet strategy 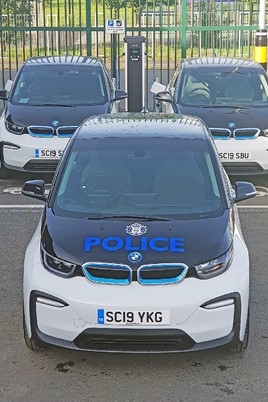 Despite nationwide emissions and air quality pressures, few of the UK’s 45 police forces have made any serious in-roads into ultra-low emission alternatives to petrol and diesel, even for their lower mileage, unmarked general vehicles. This was highlighted by the most recent Fleet200 survey, where just two of nine police fleets reported having EVs on their fleets.

But that isn’t the situation at Police Scotland. In mid-2019, fleet manager Stewart Taylor and head of fleet Tony Chalk began putting together a new strategy that would enable them to improve their current fleet while implementing a long-term plan to ensure it remained fit for purpose – a “21st century police service”, according to chief constable Iain Livingstone. Electric vehicles will have a starring role.

Crucial to the strategy was the engagement of key stakeholders, from drivers to senior executives. The fleet team took the unusual step of removing itself from the process, getting another department to gather feedback from drivers about the things they wanted improving.

Since Scotland’s regional police forces were amalgamated, big fleet savings have been achieved. But that’s not the end of the story.

Stewart Taylor has set out clear objectives and a robust plan to achieve them. He is also committed to fleet training