Aylesbury Vale District Council: How we cut out grey fleet expenses by £104,000 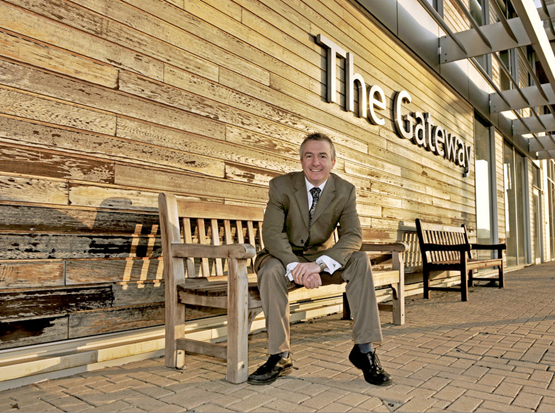 Public sector managers are having to develop new skills and help to generate revenue as years of spending cuts take their toll on the finances of local authorities.

At Aylesbury Vale District Council, a key part of the solution has been to share its fleet knowledge with fee-paying clients in a bid to protect frontline services.

Alan Asbury, senior energy and fleet consultant, works within a wholly-owned subsidiary of the council called Incgen, which is a B2B service set up to provide support and consultancy to other companies, in areas ranging from offices to fleet.

He says: “Companies can speak to Incgen for advice, because we support clients outside the council.

“A lot of businesses make fleet decisions without conducting sufficient research and analysis and that can lead to the wrong choices being made, which, in turn, causes delays and unnecessary costs.

“Introducing fleet schemes can take a lot of time and the right advice can save six-to-12 months of delays and avoid some of the costly traps fleets might fall into during the design, communication and implementation phase.”

Asbury adds: “The aim behind Incgen is supporting the local authority by generating revenue that will protect services as the council’s funding is reduced. Income feeds back into the council.”

Although Incgen is new, having officially launched last summer, the council has been developing the concept for several years on a non-profit basis.

The amount of time spent on consultancy varies, so staff are seconded into Incgen as work comes in.

Asbury has also trained as a lead assessor for the Energy Savings Opportunity Scheme (ESOS) and delivered several such company audits. Under ESOS, all large companies must undertake an energy audit conducted or overseen by an approved assessor once every four years. Audits include a calculation of total energy consumption, covering buildings, industrial processes and transport, and identify energy-saving opportunities.

The audit must be signed off by a board-level director before being submitted to the Environment Agency.

To date, Asbury has made recommendations for potential savings worth more than £4 million to companies that he has assessed.

The savings offered to clients vary, but recommendations relating to fuel costs alone range from 8-15%.

The advice provided by Asbury is based on years of experience in successfully overhauling Aylesbury Vale District Council’s own fleet operations.

Since joining the council in 2005 as sustainability manager, his role expanded to include the council’s fleet. At the time, it was heavily focused on drivers using their private cars for business use (grey fleet), which Asbury set about analysing.

He adds: “I have always been interested in fleet and the environmental impact it can have, but often it is the forgotten relation to other higher profile areas of a business, such as building energy.

“Everyone is working to make buildings and industry more efficient, because they account for 30% of global emissions, but fleet accounts for almost a quarter of emissions and that tends to get forgotten.

The key element to establishing a strategy for change was obtaining data, he says.

“You can use similar profiling techniques for a building or a fleet. You are making sure you have accurate data and then you can understand how different assets are performing. If two vehicles are operating identically, but one has much worse economy than the other, then the problem may lie with the driver. Benchmarking is important.”

The review of the Aylesbury Vale fleet identified 220 grey fleet drivers, of whom 165 were using their vehicles on a frequent basis. Vehicles were typically nearly eight years old on average. There were also old agreements in force where employees were paid a vehicle allowance, but tended not to use their cars at all.

The solution Asbury pioneered focused on car sharing, where employees book access to a pool of vehicles for a set time in the same way they might book a meeting room.

At the same time, mileage payments to grey fleet drivers were slashed from as high as 65 pence per mile (ppm) to just 15ppm.

“A lot of time and effort was spent making sure senior managers understood the benefits of change, so we explained the financial advantages to the financial director and the risk management benefits of having newer, fully-maintained cars to the chief executive,” Asbury says.

After the changes were introduced, the fleet was transformed, with just eight pool cars provided through a corporate car-sharing scheme delivered by Enterprise Rent-A-Car and a seven-vehicle car fleet supplied on a three-year lease by Alphabet.

The grey fleet hasn’t completely disappeared, as the daily hire fleet has a minimum insurance age limit of 21.

There are also some circumstances where an employee’s own car is the best option for a very short journey, for example one that could be completed on their commute to work.

However, in most cases, drivers are encouraged to use the car-sharing fleet or opt for a daily rental car if their need is more than a day or in excess of a certain distance.

Employees are also urged to consider whether travel is necessary at all.

Asbury says: “We have developed a travel hierarchy system, which starts with not travelling at all and using other solutions such as conference calls, through to public transport and then renting one of the pool cars or using your own car.

Utilisation of the car-sharing fleet is currently 80% as changes to reimbursement rates mean there is little incentive for drivers to cover business mileage in their own vehicles. At the same time, overall business mileage has fallen dramatically as employees think more carefully about whether journeys are necessary.

“We started the scheme in December 2014 and there have been substantial environmental and financial savings,” Asbury says.

“When the scheme was introduced, business mileage was about 280,000 annually, but this has now fallen to less than 180,000. As people need to book time in a vehicle, they now more closely consider the reason for their journey and whether they need to travel. It is just a different way of thinking.

“Before we were spending £220,000 a year on vehicle expenses. This has been cut by £104,000 a year thanks to the scheme, which has also reduced fuel use and emissions.”

A shift to new, cleaner vehicles, including electric cars, has slashed average CO2 emissions by more than half, he adds.

The introduction of a different way of providing transport to employees required careful monitoring initially so staff understood the importance of following the correct processes.

One key challenge was managing cancellations, as employees would book cars for longer than needed ‘just in case’, but when they returned early, they didn’t cancel their booking. This led to complaints as vehicles were seen parked in their bays, but unavailable for hire.

In addition to briefing staff about the importance of accurate bookings, the car-sharing fleet now uses a swipe card system, which makes a car available for booking as soon as a driver ends their hire period.

The car-sharing initiative has provided additional benefits, as vehicles are fitted with tracking devices because billing is based on the length of hire and mileage covered.

The data provides a detailed overview of how the fleet is being used and also ensures drivers are safe on the road.

Asbury says: “We had a couple of speeding fines in the early stages, because people were thinking ‘it isn’t my car’, but they learnt quickly that is was not acceptable, particularly as they are representing the authority.

“Risk management is a big issue and managing drivers is all about good data. I receive information on the shared fleet every month. I let people know if there is a problem. If it continues, I raise it with their line manager and that is usually enough.”

Asbury’s plans include a travel booking system, which would automatically select the best travel choices for employees based on the journey planned.

Car choices must be environmentally friendly

The council pool now has a no-diesel policy, following concerns about the health impact of particulates and nitrogen oxides.

Drivers are expected to choose a vehicle that emits less than 100g/km of CO2, with official average fuel consumption of more than 74mpg and a P11D value of under £22,000.

Asbury says there was range anxiety among drivers who used EVs for the first time, but this disappeared as they realised what the cars are capable of.

“The petrol vehicles are achieving about the same level of fuel economy as diesels, so we are happy with our no-diesel policy,” he says.

One unexpected benefit of the changes is the influence on drivers’ personal choice of car, Asbury adds.

“With the vehicles we have introduced, grey fleet drivers have had the chance to experience newer cars and it is interesting to see people are changing their own cars to the same model and brand as the shared fleet,” he says.

Alan Asbury’s commitment to protecting the environment developed after living and working in the Far East during a career break.

He experienced first-hand the human costs of pollution and the effects of climate change while visiting countries including Burma, Cambodia, Nepal and Thailand in the 1990s. This led him to specialise in environmental management and sustainability on his return home.

Since then he has worked in environmental roles within the public sector for more than a decade.

Asbury says: “I started my career as a carpenter and building site manager, but the experience abroad inspired my interest in sustainability because I saw some very poor countries and communities where the environment was being destroyed by industry through air and water pollution and with forests ripped out.

“I thought that there must be a career that puts something back. You can’t change the world on your own, but you can be involved in trying to make a difference.”

His commitment saw him spend five years’ training at university in environmental management, before his first role as sustainability officer for Warwick District Council. After moving to South Bedfordshire Council as waste strategy manager he joined Aylesbury Vale District Council in 2005.

“It is exciting that small differences here can be replicated to help tackle climate change. It gives purpose to the experiences I had abroad and the training I had,” he says.