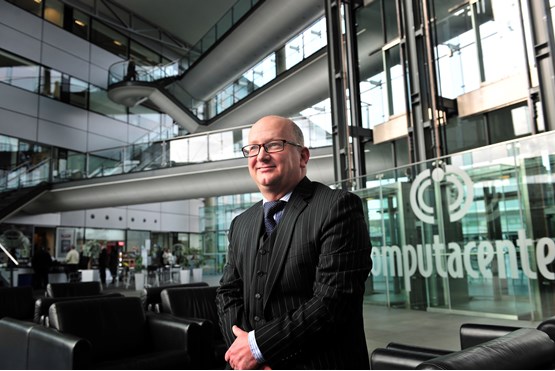 Some fleet managers might recoil in horror at the idea of expanding their UK responsibilities to an international role.

After all, running a UK fleet can be challenging enough, without adding a new set of legislative rules, cultural differences and language barriers.

But Keith Cook, deputy financial controller at Computacenter, who is poised to take on a global fleet role next month, is unfazed by his new responsibilities.

Cook believes it isn’t possible to have one group fleet policy, because of those differences, but he wants to create group principles and take best practices from the UK, where he is responsible for a fleet of 1,200 vehicles, to the company’s operations in Europe, America and Mexico.

The technology firm, whose global headquarters are in the UK, has 1,800 vehicles in Germany, 800 in France, 200 in Belgium, 30 in Switzerland, four vehicles and two golf buggies in America, and two vehicles in Mexico.

Cook will mainly focus on the British, French, German and Belgian fleets and will work collaboratively with his colleagues in other countries to implement best practice.

“We will allow local countries to have some autonomy,” he says. “It’s a governance role: it’s making sure we stick to group principles.”

Cook started looking at the French fleet on an informal basis at the beginning of 2015 and employed Fleet Logistics to carry out some consultancy work, as it has local knowledge.

Cook’s international colleagues have reacted positively to his guidance becoming a formal role.

“My French colleagues are supportive because they will get some clear direction and the control and governance that they’ve been looking for,” he says.

“For my German colleagues, it will largely be business as usual.”

Cook has had to give up some of his finance work to make time for his expanded fleet role, but he will not need to travel to the other countries. Instead, he will use Cisco’s conferencing facilities, which are so sophisticated that “mentally, you are in that room together”, according to Cook.

“The language is a challenge but I’ve got two French-speaking people that can translate for me, or I’ve got people in France who can translate,” he says.

He will also be able to track vehicle data through SAP software, which is used by the Group.

Computacenter moved from a country model to a group model three years ago, and Cook sees his new role as another part of that transition.

“You can’t just flick a switch and go from being country to group – it’s a journey,” he says.

One of the first things that Cook wants to address is driver behaviour.

The UK fleet’s accident ratio is 29% – down from 45% in 2009 – thanks to a risk management programme which includes online risk assessments from Cardinus Risk Management, training with the Institute of Advanced Motorists and post-accident investigation reports.

The French fleet’s insurance premiums are about a third more expensive than the UK’s, due to claims experience and unreported damage (resulting in end-of-contract damage charges, which cannot be recharged to the driver).

“The cultural differences between the UK and the rest of Europe are huge,” Cook says. “In France, if you get a speeding penalty and it goes through to the company, the company can’t say who was driving the car because of French privacy law, although France is changing the law on that.

“In the UK, we recharge employees for contract damage and accidents, but in France and Germany you can’t do that. You can’t use a stick, you have to use a carrot. What we are likely to do is to start introducing rewards for good driver behaviour and encouraging managers to inspect vehicles.”

One reward Cook is considering is if a vehicle comes back in good order the driver may be able to renew at a grade higher.

He is also looking at manufacturer agreements.

The van fleet is solus Citroën, although Computacenter will go out to tender this year.

In France, the entire fleet is made up of French brands only.

“I think we have convinced our French colleagues that we can move away from French-only brands,” Cook says. “We will still have French brands out there, but it’s very clear that the French market has changed in recent years and you can have non-French vehicles, so we will do that at some levels.”

Computacenter leases all of its vehicles, but there are variances between countries and Cook is not looking to have one group funder.

“The funding products are different and there are people who have better capabilities and cheaper prices in each country,” Cook says. “In Germany, it’s much cheaper to buy from the captive; in the UK it’s not. In France, you tend to buy insurance packaged in with the car; in the UK it works off claims experience.”

However, he wants to introduce some of the controls that he has in place with his fleet management and leasing provider, Lex Autolease, to the other fleets and make sure that terms and conditions are set up correctly.

“In the UK, although a lot of the fleet management and day-to-day grunt is done by the leasing company – and we like it that way – we don’t abdicate the whole thing to them. We keep a very clear watch on them. I’ve got two excellent fleet administrators keeping an eye on our provider which stops them running away with costs.

“In France, there is too much autonomy with the provider. We will change that: we will have more competitive tendering.”

If the UK’s funding method was purely contract hire, Cook would prefer to multi-source, but there is a “very limited pool” of suppliers that can do both ECO and contract hire.

Computacenter began using Lex Autolease six years ago, when it moved from an ECO-only scheme to blended funding and has re-appointed it for a further five years.

Each quarter, every contract is independently benchmarked by fleet consultant Colin Tourick to make sure it is market competitive.

“If you’ve got sole supply, I think having someone independently benchmark is absolutely of value,” Cook says.

“We’ve got most things tightly nailed down within the contract .

“It works well. We wouldn’t have renewed for five years if it didn’t.

“It’s nice to have that deal in place because that then allows me to concentrate on the Group fleet.”

Choosing to fund some vehicles through ECO, and some on contract hire, has saved Computacenter £500,000.

Mileage is the biggest determining factor, with high mileage drivers best suited to ECO. “Unfortunately, it has a very tarnished history by the way it was introduced to the market as the panacea to all ills and delivering millions of pounds of savings,” Cook says.

“It will not deliver millions of pounds of savings; it will not be right for all fleets; but, for a fleet like ours, and particularly with the blended architecture, putting people in the right product absolutely saves us a significant amount of money and helps us to be competitive in the market place.

“I don’t subscribe to the view that it is overly complex. It is complex but it can be articulated to people in a way that they understand.”

Cook acknowledges that an employee’s payslip is a nightmare to look at, but he does a presentation to all new employees joining the scheme.

“I have learned through bitter experience what words will alarm people,” says Cook. “ECO is a contribution-based scheme, but in the employee’s head the word ‘contribution’ means ‘I am now having to pay for my car’.”

Computacenter provides a financial impact statement to show employees that the contribution is exactly equal to the benefit-in-kind tax on the vehicle.

Currently, 54% of drivers are in ECO and 46% are in contract hire. There was a move towards contract hire but, since the Government increased the AMAP rate in 2011, coupled with falling fuel prices, there has been a move back to ECO.

Cook has also noticed more cash-takers moving back into the car scheme, post-recession.

Computacenter appreciates the value of a good fleet manager. “A fleet manager will save you far more than the salary you pay them,” says Keith Cook.

This was something Computacenter’s fleet manager Anita Gray, who sadly had a fatal asthma attack in 2010, did.

“It was probably the worst day of my entire working career when Anita died,” says Cook.  “We taught each other. I have a procurement and commercial background and she had the fleet background.”

Computacenter did not need to appoint a new fleet manager as Gray had “handed over a lot of knowledge” to Cook, such as the benefit of having direct relationships with manufacturers, having your own nominated dealers and “the various levers that sit within a supply contract”.

”She wouldn’t give suppliers an easy ride, she knew her stuff and that’s what a good fleet manager should do,” says Cook.