Farmdrop: “Diesel would be unthinkable”

Farmdrop operates an all-electric fleet which suits its environmental ethos and saves money, but it has had to overcome challenges. Sarah Tooze reports 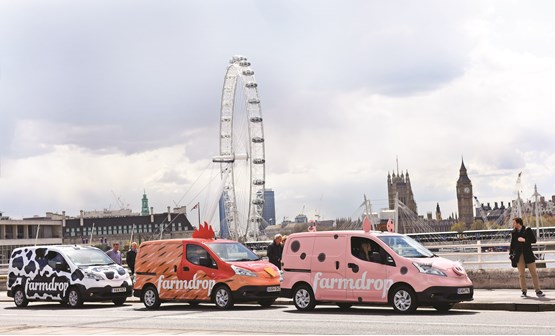 Farmdrop, a London-based online food delivery company which operates a 100% electric van fleet (14 Nissan e-NV200s) is, arguably, ahead of the curve.

The business has used EVs since it launched in 2012, principally for environmental reasons, earning it Go Ultra Low Company status in July 2016 and a Fleet Hero award for Ultra Low Emission Fleet in November.

Unlike other fleet operators, it did not have the headache of switching from diesel to electric – something which its director of supply chain Phil Eaves believes more businesses will soon need to do.

“I anticipate we’ll see a lot of operations moving to electric vehicles for multi-drop deliveries in central London. Not because of the environmental agenda necessarily for them, albeit it was quite a big one for us, but I think they will just end up being financially penalised ,” he says, referring to the planned introduction of the Ultra-low Emission Zone (ULEZ) in London, which Mayor Sadiq Khan wants to bring forward to 2019.

The Mayor has also recently announced that a £10 emissions surcharge (T-charge) for vehicles that do not meet Euro 4 standards – typically diesel and petrol vehicles registered before 2006 – will start in central London in October this year and has put forward his proposals for a national diesel scrappage scheme.

Eaves and his colleague Gemma Matthews, head of operations, welcome any moves which may remove older, more polluting vehicles from London’s roads.

Farmdrop’s mission, Matthews says, is to “fix the food chain” by bypassing supermarkets so customers can buy directly from local producers, enabling both to get better deals – and deliveries are an important part of that mission.

“Part of fixing the food chain is getting rid of diesel delivery vans because there are so many on the road, particularly in London where we know there are massive air quality issues,” she says.

Matthews has calculated that Farmdrop is saving around 33 tonnes of CO2 by running e-NV200s rather than diesel vans and they are 37% less expensive (taking into account the Congestion Charge saving of £11.50 per vehicle per day and electricity being cheaper than fuel).

Farmdrop claims its food is five times fresher than food sold at supermarkets because it travels far fewer miles and goes through fewer touch points – it doesn’t sit in consolidation points and distribution centres or at the back of the store or on the shelf.

“It just comes here, gets picked and gets delivered to customers,” Eaves says.

Farmdrop delivers in the North Circular and South Circular – essentially within a 10-mile radius of its hub in Southwark.

“I have no doubt electric vehicles will develop greater range and therefore we might stretch that to 12 or 15 miles but we won’t be driving into deepest Kent from London as other online providers do, we’ll always stick in the fairly densely populated urban areas,” Eaves says.

Farmdrop plans to launch in Bristol in September with an eye on other cities, such as Manchester, Edinburgh and Birmingham, in future years.

“We don’t feel the need to go out to the countryside because what makes the business model work is having customers in reasonable density and that enables us to pay producers the greater share of the retail price and make the whole thing sustainable,” Eaves explains.

“It’s embedded in the culture of Farmdrop so switching to diesel would be an unthinkable shift in terms of what Farmdrop stands for, both internally and for our customers, so we’re EV to stay now,” Eaves says.

Matthews adds: “What’s been good about that is we’ve built everything. All of our delivery propositions and all the processes are built on the fact that we use electric vehicles so it’s been a lot easier than I’d imagine if you were using diesel and then you started to try to use electric vehicles.”

Initially, Farmdrop outsourced its deliveries to Gnewt Cargo, which has also built its business model on an entirely electric fleet, but in April last year it started delivering to customers seven days a week and decided to bring it in-house to have more control over the customer experience.

The day-to-day running of the 14 vans (up from eight in April 2016 and soon to rise to 20 as the business grows) is now handled by head of fleet Jonathan Stansfield, who previously worked as an HGV transport manager at Asda, with Matthews responsible for fleet strategy.

“Electric is an interesting new area to be working in,” Stansfield says. “It has its challenges but it has massive perks for us in terms of our Farmdrop brand.”

As part of the Farmdrop brand the vans have animal livery (see panel) and its delivery drivers, which Stansfield is responsible for recruiting and managing, are known as Farmdroppers.

“One of the things that has been really successful is our Farmdroppers love driving them,” Eaves says. “You’ve got no gear changes so to speak, you can just cruise along in peace. They drive really nicely and the drivers are very positive about being in them.”

The vehicles are on monthly rental from Fleetdrive as Farmdrop does not want to be tied in to long-term contracts or to own its vehicles when the electric van market is still developing.

Matthews keeps abreast of the EV market through her involvement in LoCity – an industry-led programme to reduce the emissions of London’s freight and fleet operators, which launched last year.

She sits on the van working group, which is made up of van manufacturers, fleet operators and charging companies, and meets every couple of months to discuss ways to break down barriers for other fleet operators to start using ultra-low emission vehicles.

“I’m quite happy to speak to other companies that want to use ultra-low emission vehicles and about the challenges we have,” Matthews says.

“We have spoken to councils to get them to change their vehicles and I think it’s really important to do that because we’re trying to lower emissions in London, and in general. It’s great that we’ve got 14 vans but there is a lot more work that needs to be done.”

Matthews and Eaves acknowledge that they have faced multiple challenges running EVs: the lack of a market-ready refrigerated electric van, the size and range of the e-NV200, and problems with the public charging infrastructure.

Farmdrop has had to adapt the way it keeps food chilled as a refrigerated electric vehicle would take up too much energy, and therefore reduce the vehicle’s range, as well as taking up precious space in the vehicle.

“We have to have cold food because we’re delivering fresh food so it needs to be kept at a chilled temperature. The solution for that is we use thermal packaging so we don’t need to have a refrigerated van and it just helps the van travel further,” Matthews says.

The e-NV200’s real-world range is about 70 miles and Farmdrop’s average route is 60 miles meaning the drivers could risk running out of charge. However, Farmdrop has overcome this by using route planning software that enables it to set maximum mileage and ensure the vans don’t go beyond their range.

Farmdrop also chose the software because its routes were logical, the system was easy to use and it had a driver app (although its Android developers are now looking at building their own app so it is bespoke to their needs).

The vehicles are charged overnight at the hub. Farmdrop had to upgrade its electrical infrastructure once it had more than 10 vans so it was able to charge them all simultaneously overnight.

During the day there is gap in the drivers’ schedules to allow the vehicles to be rapid charged, ready for afternoon deliveries, but this has not been without its challenges.

The public charging network is “inadequate”, according to Matthews.

“They don’t often work and there are not enough of them,” she says. “Ideally I would love to have route planning software that recognises working rapid charging points.”

Eaves adds: “It’s quite complicated. You can park diesel vehicles anywhere and go to the fuel station and off you go.

“With electric vehicles you need somewhere to park but you also need somewhere to charge them. You need to be quite precise about that charging because if you’re not there long enough they won’t be sufficiently charged to do the trip.”

The other major challenge is the size of electric vans.

Matthews says: “There isn’t that perfect vehicle that is big enough, with the right payload and the right range and that is under 3.5 tonnes. There are things starting to come to the market but at the moment there is nothing on the market, readily available, that we could use tomorrow.”

However, as soon as the right size vehicle does become available Farmdrop intends to change its fleet so that it can fit more deliveries onto one van.

Driver training and telematics is also being considered.

“The vast majority of our training is focused on the delivery experience, little of it is focused on the vehicle,” Eaves says. “We could undoubtedly look to optimise that in the future because the greater the amount of charge a vehicle comes back with the less amount of electricity needs to go in to charge it back up which is cheaper for us, better for the environment, and charges faster.”

He adds: “Some drivers take quite a lot of pride in returning a vehicle with a huge amount of mileage having been very efficient in the middle of winter; others are a bit more inclined to put the heaters on and get home as fast as possible so one of the things we’ve looked at doing is some performance-related incentives.”

Farmdrop doesn’t rule out running other alternative fuels, such as hydrogen, in future if the technology and infrastructure develops.

“The alternative fuels either still emit a level of emissions or they’re not commercially available, viable vehicles. They are still a science experiment frankly,” Eaves says. “We’re not closed to alternatives but electric feels like the best, viable option right now.”

“We couldn’t have white vans”

Farmdrop’s in-house design team is responsible for creating the vans’ cow, pig and hen designs, with the wrapping itself outsourced to Auto Wrap.

“They wouldn’t ever let us drive around in a white van. It’s just not Farmdrop,” Phil Eaves says.

However, the 3D effects, such as the ears and tail, have proved impractical for everyday use and they now “only exist for photoshoots”, according to Eaves.

“Families have their photo taken with the vans,” he says. “They have become part of our brand.”