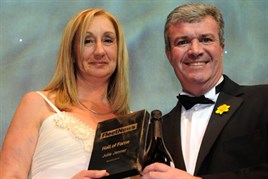 In her early years as a fleet manager, ACFO was Julie Jenner’s guiding light and saviour; now she’s arguably returned the favour with interest.

Without Jenner’s dogged determination, hard work and sharp wit, it’s difficult to believe the association would be as influential or relevant as it undoubtedly is today.

The 41-year-old association has the ear of senior politicians and civil servants within the Department for Transport, Treasury and HM Revenue & Customs and is increasingly able to influence policy.

But this success comes at a price: her role as chairman has become more demanding, exacerbated by the tax and legislation changes imposed on the sector.

Yet all ACFO board and national council members are volunteers; each has a full-time job to fill their working week.

And that includes Jenner, who has been a member of GE Capital’s Key Solutions consultancy team for the past eight years.

At one stage it filled her weekends, too. “At its worst, I was working 20-plus hours a week; now it’s seven to 10 hours per week,” Jenner says, although, mindful of her employers, she quickly adds: “But it’s never got in the way of work – I’ve never let my GE customers down.”

Fleet News: How did you first get involved in the fleet sector?

Julie Jenner: I was a PA at Homepride in 1991 and the personnel director told me to look after the company’s 60 cars.

It came under the responsibility of HR and they didn’t have a fleet manager. I was upset: I thought ‘I have short-hand skills, I can do the secretary’s job but I don’t have a clue about cars’.

Another fleet manager recommended I go and join ACFO and I thought I’d better find out more. And the more I got into it, the more I liked it.

And 21 years on, you are still in the fleet sector. What persuaded you to stay?

The turning point was going to Nokia in 1994 to look after its 120 cars. I was only meant to be a temp, but I was there as fleet manager until 2004. This was at the start of the telecoms boom.

At its height, Nokia’s fleet was 900 vehicles, but when I joined, it had no fleet policy; cars were signed off by HR with no restrictions as long as they didn’t stand out.

It was a steep learning curve but ACFO helped. It gave me confidence that I was doing the right things.

Fleet really gets to you and people tend to stay in the industry. Why? It’s unique, exciting and dynamic. Buying cars and dealing with drivers, you have to have the skills from every walk of life and cars are an emotive subject. Every day is different.