Every type of vehicle and type of job is the claim of Halfords Autocentres, which says its independence means it can also offer fleets significant savings on costs and time. Sarah Tooze reports

Independent service, maintenance and repair (SMR) providers can offer fleets significant savings on parts, labour and vehicle off-road time but they are not always perceived as having the same technical capability as a franchised dealer.

A ‘sticking point’, according to Halfords Autocentres fleet director Pete Marden, is digital service records, with some fleets sending premium vehicles to a franchised dealer to be confident they can do the software update and reset the service schedule. 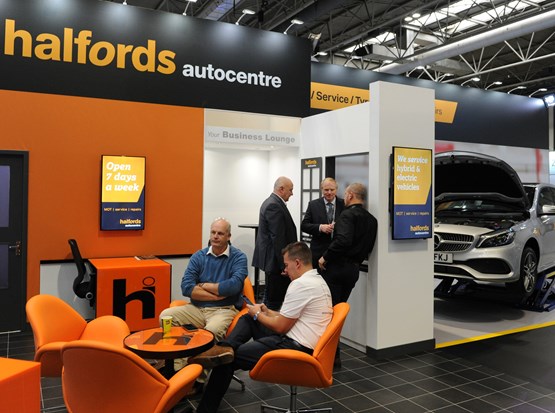 “Resetting service lights on new vehicles is becoming ever more complicated, but across the entire network we’ve got up-to-date and comprehensive diagnostic equipment which you don’t normally find with all the independents,” Marden says.

Marden has worked in the independent sector for more than 20 years, starting as an apprentice at Kwik Fit in the mid-1990s and working his way up to head of fleet, under former fleet director Peter Lambert, who retired in March this year.

Marden left Kwik Fit to join Halfords Autocentres in June, enticed by the brand’s decision to separate its fleet business from retail and to create the board level position of fleet director rather than simply having a head of fleet reporting to the operations director, who had responsibility for both fleet and retail.

Currently, fleet accounts for around 15% of Halford Autocentres’ turnover, slightly lower than it has been in the past but that’s due to “significant growth” in the retail business over the past few years on the back of a number of new centres opening, according to Marden.

There are now 315 centres in the network and Chris Rose, central operations director, whose involvement in fleet is to make sure the network can support the fleet strategy, says he is “still looking at growth opportunities across the portfolio”.

Halfords Autocentres has 800 fleet accounts, about half of which are leasing and rental customers. The other half is made up of warranty and owned fleets, including small-to-medium enterprises (SMEs). 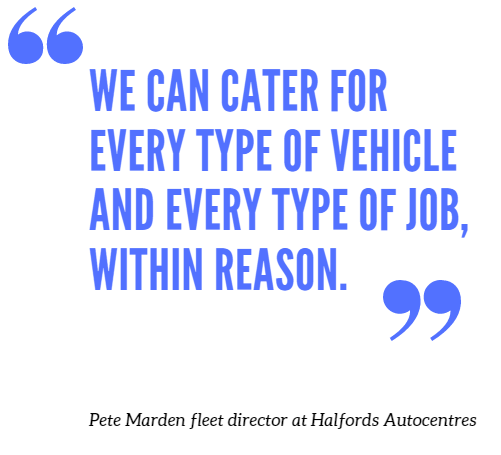 Marden expects to grow this number significantly over the next five years.

“A lot of the growth recently has come from the warranty industry and that continues,” he says.

“Our technical capability enables us to get that growth because warranty work tends to be engine work, starter motors, gear boxes, diagnostics. It’s quite technical in comparison to your standard fleet work like tyres, brakes, servicing.”

Marden suggests that some independents don’t have the appetite for carrying out technical work such as clutches whereas at Halfords Autocentres that’s “a core product”.

More than half (165 centres) of the Halfords Autocentres network can cater for vehicles up to five tonnes – something which Marden says he wasn’t aware of before he joined.

Over the past five years, Halfords Autocentres has seen its vans business more than double to around 20-25% of its fleet work.

“We’ve organically grown that business; Pete is going to strategically grow it now, based on the fact we’ve got the network behind us to be able to execute it,” says Rose.

Marden adds: “That is my priority; the largest opportunity we have within Autocentres is LCV. 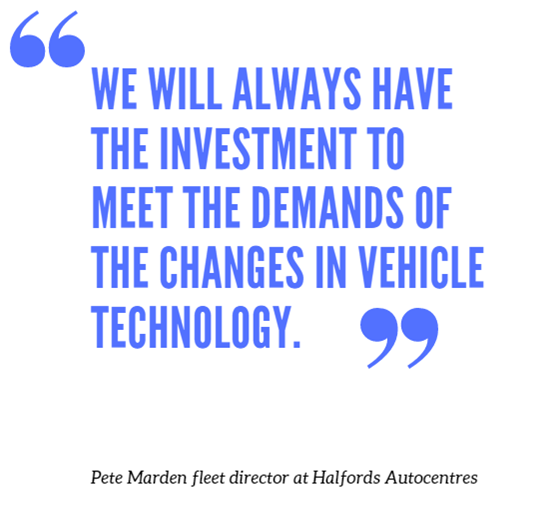 “It would be easier for leasing and rental companies to send vans to independents, perhaps more so than their premium cars, so there is a huge opportunity there for us.

"I’m not even convinced the marketplace knows the size of our network that can cater for that business. A lot of investment has gone in and we’ve perhaps not capitalised on what we could have got from the return on that as yet.”

As well as investing in its sites, Halfords Autocentres has made a significant investment in training since acquiring the business, formerly Nationwide Autocentres, in 2010.

It has built four new training centres (Basingstoke, Bolton, Halifax and Northampton), which are fully equipped to train its technicians in everything from MOTs through to electric vehicles (EVs).

“We use all four of those sites every month to continually upskill and train all of our technicians,” Rose says. “We will do 1,500 days of technical training this year alone.”

The business has made a £250,000 investment in training its technicians to work on electric vehicles and hybrids and is backing the Institute of the Motor Industry (IMI) campaign, which calls for the Government to bring forward regulations for technicians working on automated and electric vehicles (see fleetnews.co.uk, November 6).

There are around 1,000 EV or hybrid qualified technicians in the UK and Halfords Autocentres has already trained around 200 of its 1,500. By the end of the year this will rise to around 300 or at least one in every centre.

“When you do the maths we have the market share of qualified hybrid technicians so as the EV and hybrid car parc is growing we are significantly ahead of the game,” says Rose (pictured below). 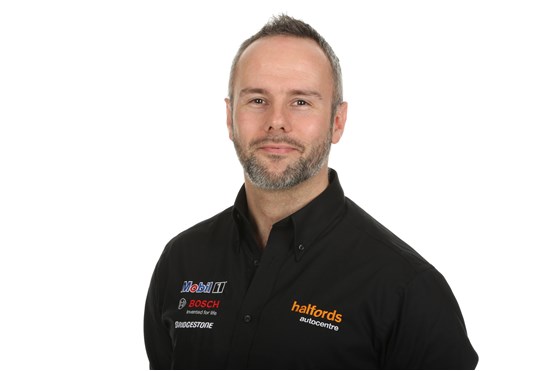 He believes Halfords’ willingness to invest will also help it to stay ahead of other independents when it comes to connected and autonomous vehicles.

“We will always have the investment to meet the demands of the changes in vehicle technology,” he says.

“I think that is a real strength for us over other independents that maybe don’t have the investment to keep abreast of the fast changes there have been in the past two years in vehicle technology.”

He doesn’t envisage manufacturers gaining control of servicing because they won’t have the capacity to meet the demand and it won’t be cost-effective for them to open the additional sites needed, in his view.

Marden says: “If you want collection and delivery with a franchised dealer it might be a two-week lead time and for us it might be an extra day so perhaps 72 hours .

"The overriding statement is we know we can give shorter lead times than franchised dealers regardless of what the requirements are”.

Marden (pictured below) acknowledges that Halfords Autocentres has more of a “booking set-up” rather than a “drive-in service” but “we are very responsive to operational vehicles; we understand the need.”

Rose adds: “We have a selection of our estate which trades late, 100 of our centres in our portfolio trade seven days a week and more than three-quarters trade every bank holiday so we are able to offer extended network coverage.

"At the moment, what we’re doing matches our network demand. Should demand change we’ll react accordingly.” 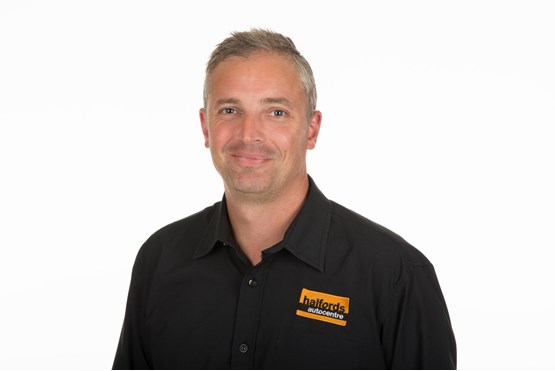 As for the financial savings fleet customers could potentially make, Marden suggests Halfords Autocentres’ labour rates are 40% cheaper, on average, than franchised dealers and that parts are 25% cheaper.

But what of the perception that franchised dealers offer a better customer experience?

That perception has been “quashed” over the past few years by all the independents, according to Marden. He says Halfords Autocentres’ customer satisfaction index and net promoter scores are as important as its sales figures.

To improve the experience for drivers while they wait for their vehicle to be serviced, Halfords now offers a ‘business lounge’ at its newest centres, which includes Wi-Fi, phone charging facilities, a desk and free hot drinks.

Although 60% of Halfords Autocentres’ bookings are made online and this is forecast to grow, fleet accounts like to have a contact centre, according to Rose.

As a result, over the past three years it has tripled its centralised contact centre team for fleet and retail customers to 24.

He believes there is scope to expand Halford Autocentres’ fleet tyre proposition after the business acquired a stake in mobile tyre fitting provider Tyres on the Drive, which doesn’t currently operate in the fleet market.

However, he stresses that is “something for the future” and is not part of current plans.

A car service sting by trading standards found "multiple failings" at a Halfords Autocentre site and led to fines and costs totalling almost £47,000.

Halfords opened its 307th Autocentre last month – exhibiting at Fleet Management Live comes in a time of rapid expansion for the company.