In 2009, Driving for Better Business (DfBB) was starting to gain real traction in the fleet sector.

The work-related road safety campaign, head-ed by RoadSafe director Adrian Walsh, had been set up two years earlier with funding from the Department for Transport (DfT) to address the issue of road safety in the business community and public sector.

It had engaged a number of business champion advocates who were sharing their initiatives and fleet policies with peers to promote the benefits of managing road safety effectively.

Forward-thinking fleets were jumping aboard to learn and adopt new practices. 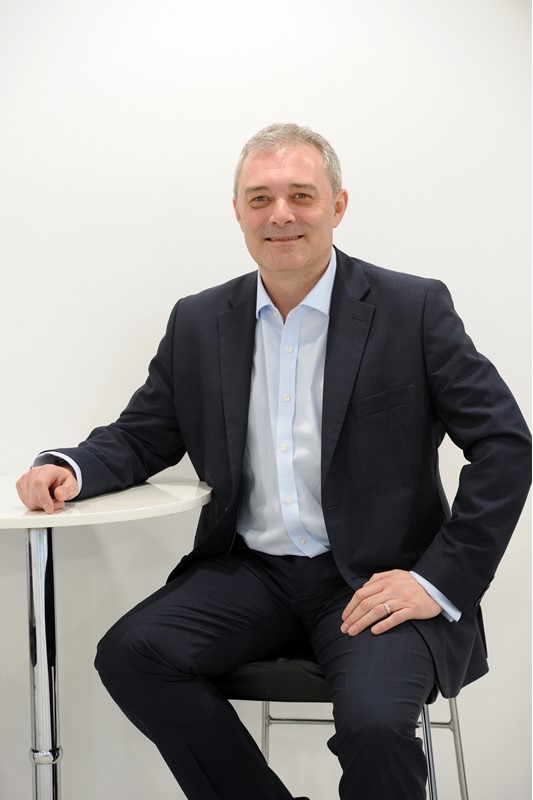 Then, in 2010, the coalition Government pulled the plug, citing austerity and budget constraints. DfBB was out in the cold. It stumbled on but, with no resource, the organisation was in danger of fading from view. Out of sight, out of mind.

Salvation came in the form of Highways England and an uncharacteristic decision by Government to allow the public body to take a long-term strategic approach by granting it a five-year £15 billion funding plan.

Now, instead of working on a hand-to-mouth, year-by-year basis, Highways England was able to create a coherent policy.

In return for its funding commitment, the Government specified a number of performance indicators, one of which is a 40% reduction in the number of killed and serious injured (KSI) on the strategic road network (SRN) by 2020, working towards zero KSI by 2040.

Another target is to lower the level of disruption on the network caused by the 40,000 incidents attended by its traffic officers each year, which result in widespread congestion and delays.

Highways England bosses already knew the well-connected Walsh and recognised that their own business engagement plan overlapped with DfBB’s initiatives.

Consequently, in April 2017, they appointed DfBB to run this part of the programme, giving it £750,000 until March 2020 when the initial five-year investment campaign comes to an end.

Walsh brought on board Simon Turner, a safety expert of many years’ standing, as campaign director to promote and grow the initiative.

“We already knew from our research that businesses don’t listen to messages about road risk and accidents, mainly because they haven’t experienced it,” Turner says.

“So, to get the message across, we use their peers – advocates from their business sector – with examples of what they have done in the form of case studies showing how they have reduced collisions and saved money.

“Highways England wants to improve compliance levels of drivers and vehicles on the SRN by improving competence, reducing distractions, looking at delivery schedules and ensuring vehicles are better maintained.

"If we help them achieve their objectives, we should secure funding for another five years.”

Key performance indicators required DfBB to introduce new measures to track the effectiveness of its programme. They include launching a new website and additional resources with specific tasks for businesses to monitor their actions.

“We have to show that we have engaged businesses, with the number of cars, vans and trucks, through driving for work policies and risk assessments,” Turner says. 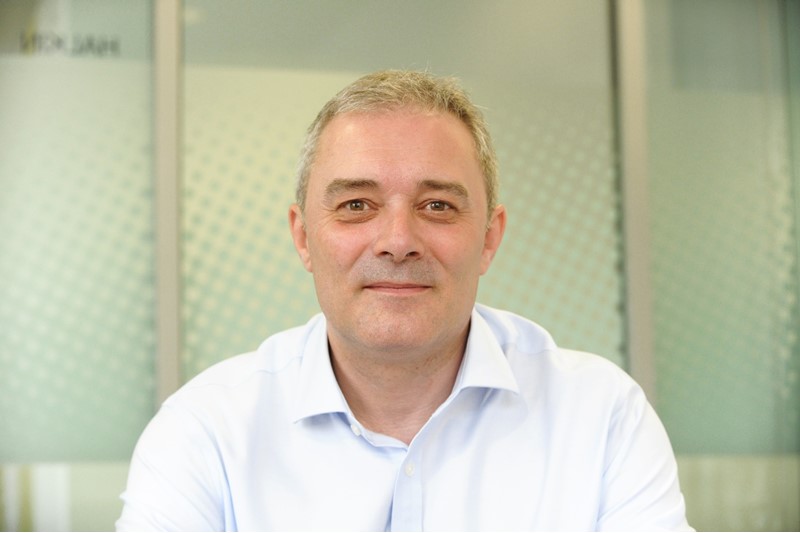 “It’s a direction of travel, but the numbers have to be big. One hundred businesses won’t float their boat. But, if we can show that the number of drivers managed by our business champions is more than 200,000, it shows momentum.”

Turner’s first job was to re-engage the business champions – DfBB originally had around 50 – and update their case studies for the website. Some had lapsed, others had been acquired, some no longer existed.

He was left with a core of 40 and hopes to sign up a new one every month over the next three years.

“But we need them to be active in promoting the campaign so we can sign up and work with even more businesses,” Turner adds.

“They should promote it to their supply chains and their clients. Highways England is making it a contractual requirement for its entire supply chain to demonstrate they manage their work-related road safety in line with this guidance.”

DfBB is targeting two audiences. The first are at the start of the journey; they do not understand their safety and duty of care obligations. The second group has the knowledge and the policies.

Turner says: “We don’t want to confuse the first group or patronise the second.”

Companies joining the programme sign up to a self-declaration commitment that states they are working within Health and Safety at Work guidelines, including a pledge to four key activities: top-down commitment from senior management; risk assessment of driving at work; a comprehensive driving for work policy; measure fleet activities, such as crash statistics and costs.

DfBB has free resources to help members achieve those obligations. They include a gap analysis which assesses a fleet’s performance through a mix of essential compliance and good practice.

Based on 50 questions and developed in conjunction with FleetCheck and the Freight Transport Association, it highlights areas for improvement across four pillars: manager, driver, vehicle and journey.

Where gaps are identified, DfBB offers advice, resources or further contacts for guidance. 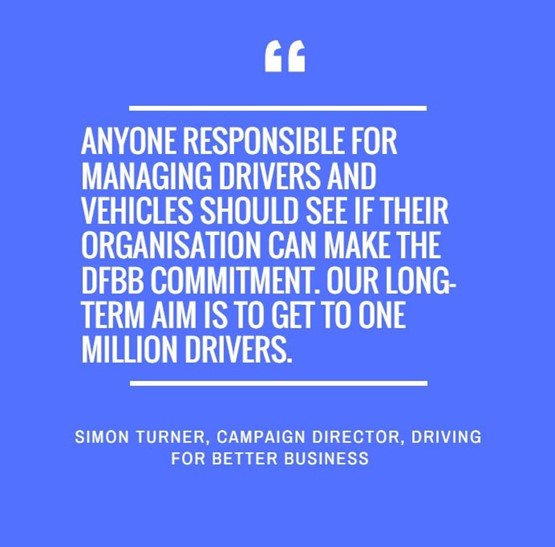 It is also planning a national conference next year and is working with a number of partners, including Fleet News, ACFO, the Institute of Directors, British Vehicle Rental and Leasing Association and the Freight Transport Association to extend its reach.

This is supplemented by a regional delivery programme via local safer roads partnerships with local authorities and emergency services. They are given access to DfBB’s resources to deliver the message to local businesses.

One major help – and a good reflection of the fleet sector’s willingness to help others to improve their safety records – is the sharing of handbooks and policies.

DfBB is also writing some template policies, such as phone usage, which companies can adapt to their own circumstances.

“Ultimately, everything is geared towards getting companies to sign up and work towards the commitment,” Turner says.

He is keen to widen the range and type of business on the programme, with a particular focus on engaging smaller fleets.

“The important thing for us is variety – we need to recruit business champions of different sizes and from a range of sectors so that, whatever the size and type of organisation a fleet manager works for, we have case studies that are relevant to their particular challenges,” he says.

“Anyone responsible for managing drivers and vehicles should see if their organisation can make the DfBB commitment. Our long-term aim is to get to one million drivers.”

While much has changed in the fleet sector since DfBB was conceived just over a decade ago, such as technology, legislation, urban transport policies and the focus on air quality, “one thing remains the same”, adds Turner.

“And that’s the harm that a poorly managed fleet of vehicles and drivers can do to your bottom line,” he says.

Why become a business champion?

Business champions want to help others. They recognise that safer roads benefit everyone and understand that they can play a key role by sharing good practice to enable others to learn from their experiences.

“Our most engaged champions have sign off from the top to give their time to the campaign,” says Simon Turner. “Our business champions have been the lifeblood of the campaign since it started. Their stories are essential to inspire other ambitious business leaders as to what can be achieved.”

Champions tend to be the innovators, those that have fitted the latest technology such as telematics and advanced driver assistance systems (ADAS).

They can demonstrate the long-term benefits of addressing and managing risk but, for newcomers, there are plenty of ways to have an immediate and significant impact on their safety record.

“It isn’t onerous – there is plenty of low hanging fruit,” says Turner. “They can get good results in the first year of signing up. The key is measuring your fleet activity so you can see where potential problems may lie.”

However, companies do not have to commit to becoming a champion in order to get involved with the programme, which is free to join.

Those interested in joining DfBB should go to the website – www.drivingforbetterbusiness.com – where they can see case studies and examples of the measures and savings that are possible.

Safe driving policies implemented by Cogent Breeding have seen it join the Driving for Better Business campaign as a business champion.

McLaren Automotive has become the latest organisation to join the Driving for Better Business (DfBB) campaign as a Business Champion.

Driving for Better Business (DfBB) is hosting a number of exclusive demonstration days to allow fleet decision-makers to try out the latest driver assistance technology on both cars and vans.