The number of UK fleets running full electric vehicles could treble over the next three years, according to Corporate Vehicle Observatory (CVO) research, published by Arval.

CVO, which interviewed more than 300 fleet managers in the UK as part of a global survey of 3,700, found that 14% currently have electric vehicles – cars and/or vans – but that proportion could rise to 42% by 2021.

Fleets of all sizes expect to add electric vehicles, with those running fewer than 10 vehicles making most progress: currently just 4% have EVs; in three years’ time 30% expect to have them.

At the other end of the scale, 68% of companies with more than 50 vehicles will have EVs within three years, up from 35% today. 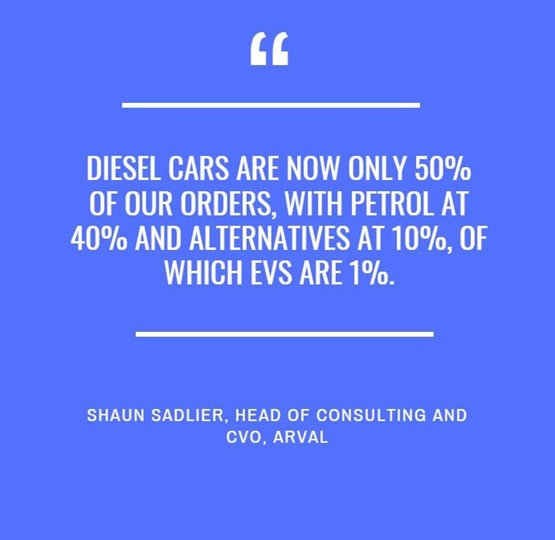 It makes electric the third most popular alternative to petrol and diesel, behind hybrid (25% now; 53% within three years) and plug-in hybrid (22%/46%).

As manufacturers launch more electric vehicles over the next couple of years, ranges extend to make them more suitable for a broader compass of fleet requirements and the infrastructure expands, so EVs will become readily accepted by more people.

In addition, in 2020, benefit-in-kind taxation for electric vehicles drops to just 2% (currently 13%), which will accelerate their appeal in the company sector.

However, it isn’t the only alternative gaining interest from fleets. Hydrogen fuel cell, while still in its infancy with just a handful of models available to lease, could see a seven-fold rise over the next three years.

Just 3% of UK fleets (nine companies in the survey) have them today, but 22% expect to be using them by 2021. The proportion is greatest among large fleets, with 31% predicting they will be running hydrogen fuel cell vehicles.

Despite the bullish views of fleets on alternative fuels, Arval has yet to see this reflected in its forward orders book. However, it has seen a marked decline in diesel demand.

“Most of this is being picked up by petrol. Diesel cars are now only 50% of our orders, with petrol at 40% and alternatives at 10%, of which EVs are 1%,” Shaun Sadlier, Arval head of consulting and CVO, says. “Two years ago, diesel would’ve been 70%-plus.

“As long as you practice wholelife cost, the introduction of alternative technologies works. They will sit where they should regarding grading and costs. We have done work with clients that were diesel-only and seen petrol and alternatives as viable choices.”

Nowhere is this change better illustrated than on Arval’s own fleet of around 170 cars. It used to be 75% diesel, now it is 20%.

Sadlier believes the proportion of fleets willing to consider hydrogen is high, given the lack of existing infrastructure.

“But our research shows that there is sufficient interest for it to be taken seriously and our tax regime is also pushing people down that route,” he adds. “Fleets have to consider that the taxation of vehicles is an important part of Government revenues – they need to stay ahead of the wave.”

One big unknown is the new Worldwide harmonised Light vehicles Test Procedure (WLTP) fuel and emission testing regime, with many cars still going undergoing testing ahead of the September deadline.

Fleets are already feeling the effect, with a fifth saying it is impacting on their operations. A further third believe it will affect their fleet policy within the next three years.

The proportions increase the bigger the fleet; a third of those running more than 50 vehicles have been affected, with another 41% anticipating an impact over the next three years.

“We have fleets with CO2 caps that are seeing the new ratings throwing cars out of their bandings,” Sadlier says. “We have one client, where driver satisfaction is important, taking a step to increase their CO2 bands by 10-15g/km as a stop-gap measure.

"They understand that the car is not throwing out any more CO2 in reality, or using any more fuel, they just have a more accurate theoretical number.”

Arval is undertaking a major study to assess the effect on wholelife costs of using the more accurate WLTP figures and the NEDC-correlated values. It anticipates the impact will be greater on hybrid and plug-in vehicles than petrol and diesel.

One outcome of the dieselgate scandal in 2015 was the fact that air quality, NOx and particulates, started to work their way into fleet (and public) consciousness. 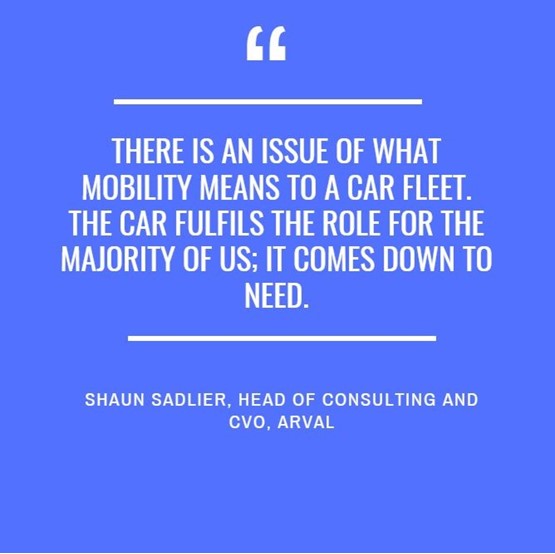 While CO2 emissions remain the major driver of fleet policy, due to their implications for taxation, a growing proportion of fleets is also considering NOx and other particulates.

Sadlier believes it is more of an awareness than an active driver of fleet policy. He says: “We are increasingly asked for this type of information. It’s more about data gathering, and it is generally the larger corporates – it’s hard to say they are taking action as a result.”

Those with an obvious vested interest, such as the Department for Environment, Food & Rural Affairs (Defra), have changed their fleet policy as a result of NOx emissions, moving away from diesel in favour of plug-in hybrid and full electric.

And, according to its head of fleet Dale Eynon, the financial figures stack up when calculated on a wholelife cost basis.

However, some fleets admit to not taking any emissions data into consideration when selecting their vehicles – even CO2 isn’t omnipresent.

On average, 30% ignore emissions data, peaking at 40% for the smallest fleets. Even 14% of large fleets claim to not have an emissions-based choice list.

“It’s surprising,” says Sadlier. “We rarely see it, but it does happen every so often.”

Mobility as a Service is not death of company car

The company car remains the preferred form of mobility with only a minority of fleets paying attention to the alternatives.

Just 2% of companies say they would ‘definitely’ give up all or some of their company cars in favour of car sharing (a multi-use car such as a pool car), while 6% say ‘probably’.

Another 2% would ‘definitely’ give up cars for ride sharing (more than one person sharing a car, such as taxi, pool car or own car), with 7% saying ‘probably’.

However, it should be noted that this is up on last year, where just 1% said they would give up cars in favour of car or ride share.

The message is clear: company cars are here to stay, according to those making the decisions on fleet and travel policy.

That’s not to say that companies aren’t employing such services – 26% use car share (up from 20% in 2017) and 38% use ride share (up from 33%). But only another 8% are likely to consider introducing car share over the next three years, with 10% planning to take a look at ride share.

“This is low future uptake for services that are in their infancy,” says Shaun Sadlier. “There is an issue of what mobility means to a car fleet. The car fulfils the role for the majority of us; it comes down to need.”

What of the much talked about ‘next generation’ of employees who, it’s claimed, are less likely to want a permanent car?

“We see 20-year-olds allocated a car for the first time who think it’s Christmas,” says Sadlier. “They still really want it.”

In the UK, mobility remains a car-related topic, whereas other European countries have more readily adopted non-car forms of travel, such as trains, buses and bicycles, partly due to their integrated transport and payment systems.

“With our clients there isn’t a great deal of noise. We simply don’t have integrated transport solutions yet,” Sadlier says.

However, staff are being given the option to choose alternatives, particularly at larger companies. Almost three-quarters (71%) of businesses with more than 250 employees give all or some drivers a cash option, with just 18% only offered a company vehicle.

Compare that to smaller organisations where more than half of drivers have the option only of a company vehicle, up a few percentage points on last year.

The Arval CVO research questioned fleets about their general optimism as well as operating cycles and found a clear point of difference between the largest and smallest fleets.

Compare that to the largest fleets, whose balance of 20% is substantially down on 2017’s 38%. It’s the lowest net figure for more than five years.

“Smaller fleets see ‘business as usual’ but the larger companies are more concerned about Brexit and the big issues affecting fleet operating costs so that affects their opinions,” says Shaun Sadlier.

“A lot are looking to run leaner. It has been on the agenda, but in the past six months we have more large corporates and international clients pressing us to come up with cost-savings on their fleet.”

Small fleets are looking at driver behaviour for their cost reduction strategies, but for the bigger organisations “nothing is off the table; they are open to looking at everything”, Sadlier adds.

Despite some uncertainty and a new drive to reduce costs, operating cycles have been largely untouched over the past year. UK fleets remain out of kilter with their mainland European counterparts, averaging 3.9 years (Europe: 5.7) for all vehicles.

“Key to change is what your peers are doing, as cars are still seen as a recruitment and retention tool,” says Sadlier, although he adds that there is minimal financial gain to moving much beyond four years.

“However, this calculation doesn’t take into account big one-offs such as improvements in technology or fuel savings.”

Similarly static are the finance methods fleets use to fund their vehicles. There has been a slight move to leasing across most fleet sizes, at the expense of outright purchase, although the latter still dominates for the smallest (sub 10-vehicle) fleets at 55% (2017: 58%).

Leasing is the preferred option for large fleets, accounting for 55% of vehicles (up from 52% in 2017), followed by outright purchase at 23% and finance lease at 21%. However, almost a third say they intend to move more vehicles to contract hire over the next three years.

“This is most likely because of Brexit and uncertainty of residual values,” explains Sadlier. “Leasing companies are taking risk across lots of cars and fuel types so our ability to mitigate that risk is better than a single fleet.”

Fleet News webinar: Defining your future fleet policy with the challenges of WLTP - in association with Arval

Defining your future fleet policy with the challenges of WLTP - in association with Arval.

Arval has signed an exclusive remarketing contract with Manheim to deliver services for 10,000 vehicles a year.