Royal Mail is ‘ready to go’ with SMR fleet services 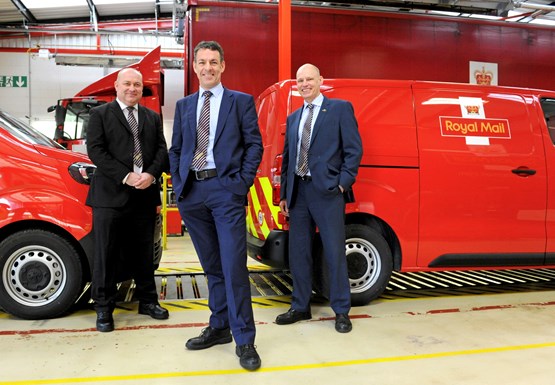 Competition in the van and truck fleet maintenance sector is about to heat up. Royal Mail, the UK’s largest fleet operator, is opening up its nationwide workshop network to third party fleets, taking the fight to established service providers.

However, while rivals are eager to take on the full range of fleet management services rather than just maintenance, Royal Mail is only interested in the latter – at least for now. This will facilitate direct relationships with fleet management and leasing companies as well as fleet operators, which the company has earmarked as a major target.

Royal Mail has been piloting its maintenance scheme for the past 15 months, initially at six workshops, following a business restructure which put greater emphasis on new revenue opportunities.

The initiative has buy-in at the highest level; chief executive officer Moya Greene alluded to it when announcing the organisation’s 2015/16 financial results (Fleet News June 23, 2016) and has given her full, unequivocal backing.

The proof comes in a seemingly innocuous area: the new Royal Mail Fleet logo. This is only the second time in the organisation’s 501-year history that it has allowed another word to sit alongside its illustrious logo.

Paul Gatti, director of Royal Mail Fleet, sets the scene. “We started out on this journey 18 months ago when we were considering how the wider Royal Mail business could bring in new revenues by exploiting our assets,” he says. “We employed some consultants to look at the maintenance market and they felt there was an opportunity for us.”

A pilot scheme was launched to provide Royal Mail with a greater understanding of the changes and realignments it needed to make in order to make its mark. Among the first customers were British Gas and RAC, via their partner Hitachi.

“We quickly concluded we couldn’t do it through just six sites; our USP is our national network of 110 workshops,” says Gatti.

Consequently, he extended the pilot to 20 locations, a move which coincided with the appointment of four former BT Fleet executives: Duncan Webb as commercial director, Neil Thomas as sales and account management director, Mark Biezsley as head of fleet management and Mina Roopra as head of marketing. Their knowledge is proving invaluable in structuring and promoting the new operation.

Royal Mail has now opened up the programme to 81 workshops which gives it national coverage; the remaining sites will come on stream during the coming months.

“We took it slow, but now we are ready to go,” Gatti adds.

The service is aimed at van and truck fleets, although Royal Mail can also accommodate cars and is happy to take on contracts which include them. It can handle every make and model up to the biggest trucks, including double-deck trailers.

Gatti expects business to be a mix of maintenance contracts that Royal Mail owns and maintenance it carries out on behalf of a leasing or fleet management company.

“We are passionate about bringing our workshops into a proposition that fits the end customer,” he says.

The pilot has resulted in a number of learnings, not least on how best to schedule workloads and resources efficiently.

“We had to enhance our systems; 60% of our red fleet work is unplanned which makes it hard to manage the workshop,” Gatti says. “This was a big learning.”

The workshop network already has sufficient capacity to take on additional work – it currently carries out 400,000 jobs a year – but more time can be freed up by improving the efficiency of the internal fleet, reducing the demand on the network and its 1,000 technicians (see panel).

Gatti is under no illusions about the size of the task. Royal Mail Fleet enters a market with a number of strong competitors, but he believes it has a number of advantages, not least its willingness to work as a maintenance supplier to leasing or fleet management companies.

“It is tough to unhook someone from their current maintenance provider. We have to offer them something different and we are doing that,” he says.

Those points of differentiation include owning and operating the UK’s largest network of non-franchised workshops, including the biggest truck and trailer network (20 have full double-deck trailer capability) and an in-house mobile servicing network with 40 technicians.

The workshops are open long hours; 70 sites operate a 12-hour shift, while many are 24-hour. Saturdays are also a standard offering at several locations.

Andy Melling, head of fleet maintenance, explains: “We open those hours to fit the operation. There is slack so it gives us the opportunity to maximise those shifts.”

Webb adds: “Vans run during the day and trucks run at night for Royal Mail so we have to support the different needs for SMR.”

Gatti expands the list of differentiators: “We keep the biggest fleet in the country on the road with high levels of compliance and availability. And we are a truck-capable company that can do vans, not a van company that does a few trucks.”

So, the age-old question: faced with a Royal Mail van and a third party van, which gets repaired first?

Webb steps in to reply candidly: “No one gets priority; our business is structured to meet our agreements. Every garage faces these choices daily and the same question is being asked by our internal customers. We commit to a service level; when the vehicle is booked in, we will meet that service level.”

Such potentially tricky decisions are further eased by the way Royal Mail Fleet resources its workshops, according to Melling.

“Every site is resourced to meet the unexpected. We hold back because we know customers will have a need for unplanned maintenance and repair,” he says.

Of course, Royal Mail Fleet’s objective is to reduce unplanned maintenance, something it has been achieving on its own fleet thanks to a range of initiatives, including its Fleet News Award-winning World Class Mail initiative which implements preventative maintenance routines to pre-empt parts failures.

It has helped to reduce unscheduled visits and, says Gatti, is likely to be offered as a service to third party maintenance partners.

“The overall number of visits to the workshop has reduced even though our fleet has increased in size,” he says. “The insights we have means we can generate savings for other customers once we have their data in our system.”

However, the first priority is to get a foothold in the market with the maintenance programme. It is part of a five-year growth plan which has revenue and volume at its heart, rather than sheer customer numbers.

Webb offers the final word: “We have to do it right so we are not looking for sudden growth. Our plan is bold, but considered.”

Royal Mail Fleet’s third party maintenance initiative is one of four new business pillars, each of which is designed to boost revenues or efficiencies.

Paul Gatti is constantly looking at the Royal Mail fleet with a view to addressing driver behaviour in a way that will reduce the pressure on the workshops and free up capacity to take on external SMR business.

Currently, the ‘red fleet’, as Royal Mail calls its operation, visits the workshop on average six or seven times a year per van, against an industry average of twice a year. New service level agreements and key performance indicators will be combined with a new pricing structure that will allow operating centres to understand their costs in more detail.

“At the moment they just see one number; we have to itemise and pull out the costs by unpicking contract hire and SMR so it reflects their actual costs,” Gatti says.

Meanwhile, delivering a class-leading workshop business will involve providing the network with the tools, systems, technicians and working practices to become more efficient and more profitable.

As with all the pillars, this part of the plan is also geared to opening up capacity for external business.