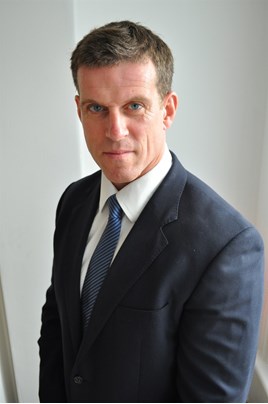 Not so long ago, few people would have singled Hyundai out as an environmental champion of the automotive industry. Yet, here it sits as the Fleet News green manufacturer of the year with the Ioniq as the zero emission car of the year.

So, what has changed? Much of it is down to timing. The company has been investing heavily in alternative fuel research and development since creating a dedicated fuel cell unit in 1998, but it has only recently been in a position to bring a realistically-priced car to market.

The model roll-out started with the hydrogen fuel cell ix35 in 2015 and followed up last year with the innovative Ioniq, which puts three drivetrains (hybrid, plug-in and full electric) onto one platform.

This ‘three-in-one’ policy is likely to be extended to other models eventually; certainly almost every future Hyundai model will have a hydrogen or electric version, according to sales director Martin Wilson (pictured).

It’s not just models that make Hyundai green; it also displays a holistic approach to the environment, showing innovation in its production processes at factories across the globe, including Europe in the Czech Republic.

Fleet News: How successful has the Ioniq been and which of the three drivetrains are most in demand?

Guy Pigounakis, fleet director: We had to re-set all our ordering to take into account demand rather than our forecasts. No one expected it to sell like it has but, with all the issues around emissions, every company we are talking to is obsessed with making statements about reducing their carbon footprint.

Martin Wilson: We expected to sell 2,500-3,000 this year. But we have taken just shy of 2,000 orders in the first three months. We have placed 1,200 orders with the factory  to arrive May/June time and we have 950 back orders, but the rate is still strong. Demand has been predominantly for the hybrid model, but we have been constrained on supply for the electric. The guides are now being kinder to alternative fuels so the monthly payments stack up. We now have a conservative target of 6,500 this year. The success of Ioniq has taken everyone by surprise, including our business centres. It’s a game-changer; it’s attracting people who have never considered Hyundai or alternative fuels before.

FN: How much is that down to pricing?

MW: We have priced it right and the residual values are very strong which makes it attractive on all the finance methods, especially personal contract hire (PCH) and business contract hire (BCH). We have only given very small discounts; we are not distressing prices – this is genuine demand. The sweet spot is around 18 months on this car and there is big demand in the used market for that age and mileage of car, especially when it will still have a three-and-a-half-year warranty on it.

FN: So the Ioniq is giving you the opportunity to talk to fleets who otherwise wouldn’t have considered Hyundai?

GP: Yes, it is opening doors, especially with leasing companies – they are taking a renewed interest in our current offering and what is coming. We are working on a strategy to take advantage of this, to raise our profile and our strength of product with leasing companies. The timing is perfect to reposition the brand.

MW: We suffer with our share of voice with leasing companies. We have to be front of mind with their sales teams so they can get that awareness out to their customers and their drivers. This can make a dramatic difference very quickly.

GP: We are meeting with the CEOs at the top leasing companies – that’s a first for us.

FN: What about the opportunities with the ix35 hydrogen fuel cell?

MW: We will have a new right-hand drive fuel cell ix35 by the end of the year (to-date it has been left-hand only). Six months ago we thought electric vehicles would eclipse fuel cell but there has been a massive uplift in interest for fuel cell. With more fuelling centres being opened, more people want to understand the difference in everyday use between fuel cell and electric vehicles. It all depends on the infrastructure, but the opportunity could be enormous.

FN: Are fleets geared to cope with the additional complexity that comes with having many fuel options instead of simply opting for diesel?

MW: Larger fleets are prepared for the complexity of many fuel options. We have an opportunity with the smaller fleets to get them to realise the benefits of electric vehicles. We have to make our customers become converts. They are wary: the greater the complexity, the more they have to feed down to their drivers. But also, their drivers will put pressure on to the fleet to drive down P11D tax.

GP: We find that youngsters want the green option and older people stick with diesel. It is still down to taxation and the Government has to address that – until they do, diesel sales will remain artificially high.

FN: How do you encourage more fleets to put your mainstream models on their choice list?

MW: It’s about raising awareness, even now. The reaction of people when they get into our cars is surprise. They don’t really have a perception, so we just have to raise awareness.

GP: We have one of the highest test drive-to-sell conversion rates in the industry because people’s expectations are modest. So our challenge is to increase the number of people that can experience the cars. Dealers have a role to play in this. We have rationalised our network and kept those that are committed. We have increased our support and commitment to them. They have dedicated demonstrator fleets and we have a central fleet to support them.

FN: What have you done to improve residual values?

MW: A KPI for every new car or facelift is to have the residual value in the top three in the sector and we are achieving that. Our residuals have increased steadily over the past three or four years. If we get the residual value right, everything else works. We have more resource working with the pricing guides and we involve them earlier in the new car launch strategy. We have actioned some of their suggestions into production and changed specification based on their views. And we are honest with them about the sectors we are targeting which gives them confidence.

Wilson’s goal is to achieve market share in the leasing sector (which increased from 2.5% to 3.1% last year) that matches its national share (currently just under 3.5%). Leasing is one of Hyundai’s biggest opportunities together with public sector and local business via the dealer network.

“This year, a key goal is to double our volumes through the top 20 leasing companies, increase the corporate element and also to double our public sector business,” Wilson says.

Hyundai’s priority is to target the more profitable channels in fleet, adds Pigounakis. “We are doing a gap analysis on every channel to see where the opportunities are and the cost of the opportunity,” he says. “Some are very driven by discounts.”

Those channels will be disregarded on the basis of not being financially viable. “It’s not business at any cost,” he adds.

"Hyundai is bringing aternative fuels into the mainstream in an innovative way with the loniq-three-in-one car. It is committed to hydrogen as well as electrified platforms and its sustainable energy is evident in its Korean factory where surplus electricity produced by solar panels is fed back into the grid."

"The loniq offers one of the longest ranges of any electric vehicle. With ample space and a high-tech interior wrapped in an attractive body, its low price results in a very competative running cost and brings electric motoring to the mass market."

Hyundai is targeting the true fleet sector with renewed vigour this year as it looks to reduce its penetration into the rental sector.

Hyundai is bringing alternative fuels into the mainstream in an innovative way with the Ioniq three-in-one car. It is committed to hydrogen as well as electrified platforms and its sustainable energy is evident in its Korean factory where surplus electricity produced by solar panels is fed back into the grid.