If you haven’t heard from Volvo then you should expect to pretty soon.

The company’s new head of business sales Steve Beattie has a simple, but very clear, strategy: “We need to talk to more customers.”

To achieve it he has restructured Volvo’s fleet team, which previously had responsibility for all fleet sales, splitting it between larger and smaller fleets. 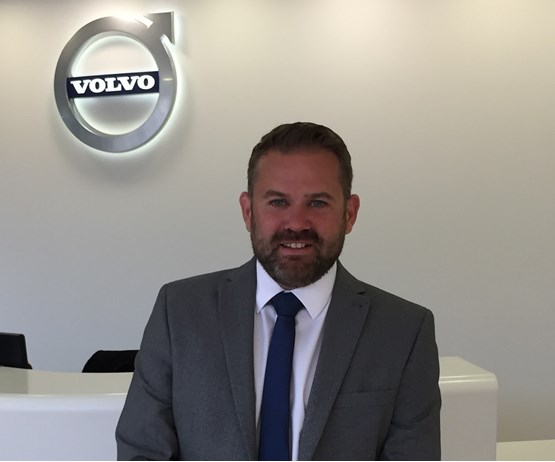 Prior to his appointment last September, Beattie had a 12-year career with Vauxhall. He spent six years working in fleet sales, most recently as contract hire and leasing manager.

He wants to sell the Volvo brand to corporate customers in the same way it was sold to him.

He confessed that the Swedish manufacturer was not really on his radar during his time at Vauxhall, but a single trip to the local dealer had him sold.

“When I walked in to the showroom for the first time and saw a new S90 R Design it was a bit of an epiphany moment seeing ‘new Volvo’ compared to the old models.

“I knew I could sell these cars if I could make sure user-choosers had the same experience that I had.”

“The previous team had done a really good job,” he says. “The way they structured business sales and what they had been doing met the brief they had at the time.

“But I looked into the data and we simply don’t talk to enough people.

“This year we think the market will be down so we need to maintain our share. We may not deliver bigger numbers than last year, we just need to deliver the numbers in the right way with more true fleet.” 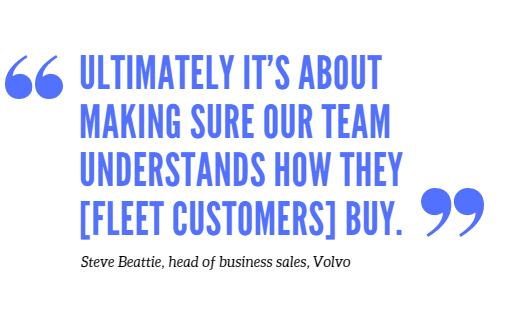 According to a Sewells survey, Volvo cars appear on fewer fleet policies than any other premium brand – a statistic Beattie is keen to change.

He has tasked his team of fleet sales managers to find out as much as they can about each of their prospective customers.

“Ultimately it’s about making sure our team understands how they buy. It doesn’t matter what their job role is, be it HR, procurement, finance or fleet.

“We need to know what the basis of their fleet policy is. It could be wholelife costs, P11D or CO2 – I don’t think I’ve seen two fleet policies that are the same. We have to understand the policy that person looks after. They all have a buying signal,” says Beattie.

He wants Volvo to be on as many end-user policies as possible, but stressed that being relevant in those policies is key. 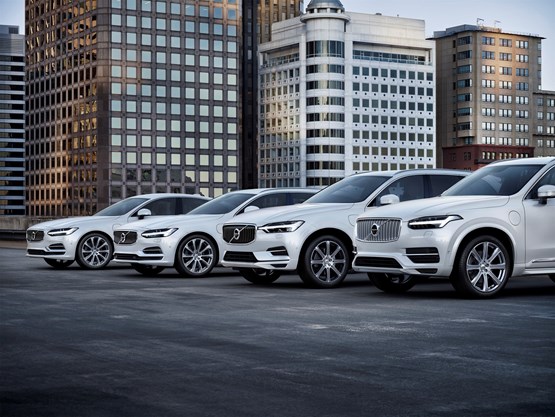 “The success until now was that we were on policy, that’s not a success any more.

The success now is understanding where we sit on that policy: what cars are on that grade? Where can we compete? How can we get market share of that policy? The team will concentrate on that,” he says.

Beattie is confident that by asking the right questions the fleet sales will come naturally. But, he is also excited about his new regional business development team, which will help dealers to boost volume.

He explains: “There are more than 100,000 small businesses in the UK – XC60 and XC90 is absolutely prevalent to the senior managers of small companies.”

The new Volvo XC40 compact SUV is expected to be a key driver this year.

“Some 15% of the premium brand marketplace is in that segment so for us it’s a huge opportunity,” Beattie says.

Since the launch of the second generation XC90, in 2015, Volvo has embarked on an ambitious model replacement programme.

In 2016, the S90 executive saloon and V90 estate were launched and last year saw the debut of the all-new XC60 SUV, the brand’s best-selling car.

This year, the XC40 will be rolled out, alongside new versions of the S60 and V60 by the end of the year.

All Volvo’s 60- and 90-series cars are based on the brand’s Scalable Project Architecture (SPA) platform.

The design is flexible for both size and powertrain, allowing for technologies such as safety equipment and driver assistance features to be shared across the model range.

The XC40 will be the first car to use a shorter version of SPA called Compact Modular Architecture (CMA).

Eventually all Volvo models will be based on either SPA or SMA.

By 2019 the brand has made a commitment that every new car it launches will feature an electric motor, as either a fully electric car or a hybrid.

Currently, Volvo offers a twin-engine option on the XC60, XC90, S90 and V90. Badged T8, these plug-in hybrid models have CO2 emissions of below 50g/km and all-electric ranges of around 22 miles.

There is also a diesel hybrid in the current S60, although Beattie confirmed future strategy is based on petrol-hybrid models. 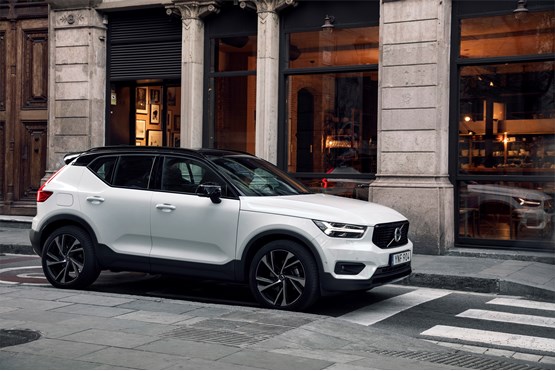 Volvo has also confirmed a plug-in hybrid version of the XC40 using a three-cylinder petrol engine and 75PS electric motor. The same unit will feature in the 60-series cars following its debut in the XC40 later this year.

Each engine, regardless of fuel type, is based on the same engine block, which saves money and gives the brand the flexibility to react quickly to changing customer demands.

In 2012, almost every Volvo sold in the UK had a diesel engine, by 2017 that had fallen to 70% and it is expected to continue declining this year. V40 models have already reached an even split of petrol to diesel.

By 2020, the brand has an aspiration to sell 60,000 cars per year in the UK. This will be driven by its entirely new model line-up, electrification strategy and safety commitment that no one will be killed or injured in a new Volvo from that year.

Volvo Cars will from today start developing its autonomous drive cars with help from Swedish families who will test its XC90 on the public roads of Gothenburg.

Thatcham urges carmakers to follow Volvo’s lead after What Car? Car of the Year win

Safety technology designed to avoid crashes helped the Volvo XC60 win the What Car? Safety Award, while the diesel XC40 was named What Car? Car of the Year.

Hi-tech and high spec, Volvo newcomer is a true premium SUV contender as Simon Harris discovers in the first drive.