Thatcham urges carmakers to follow Volvo’s lead after What Car? Car of the Year win 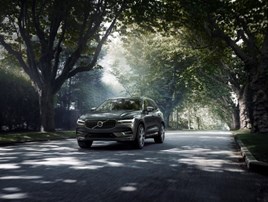 Safety technology designed to avoid crashes helped the Volvo XC60 win the What Car? Safety Award, while the diesel XC40 was named What Car? Car of the Year.

The D4 diesel version of the XC40 was also named Family SUV of the Year – a new category for 2018.

Reflecting on the XC40's success, What Car? editor Steve Huntingford said: “We were very aware that some people would still consider the XC40 a controversial choice due to the fact the best engine in the range is a diesel. However, our independent true MPG tests prove that this latest engine emits less NOx than plenty of petrols, while offering the low CO2 that made diesels so popular in the first place.

“Our judging panel refused to be swayed by the anti-diesel hysteria coming from politicians and some of the mainstream press and instead made their decision based purely on the merits of the cars.

“Our belief is that for many car buyers diesel remains the right economic and environmental choice – and for those that it doesn’t suit, a petrol or electrified alternative is available.

“The fact is the Volvo XC40 is a stunning achievement and proves to car buyers everywhere that diesels are definitely not dead.”

As a result, Euro NCAP awarded the Volvo XC60 a score of 95% for its safety assistance features.

Safety Award judge and director of research at Thatcham Research, Matthew Avery, said: “The Volvo XC60 achieved a very high adult occupant protection score of 98%, in Euro NCAP’s toughest crash tests ever. But it is also bursting at the seams with safety technology to avoid the crash happening at all.

“It is so far ahead of the game that its innovative Cross Traffic Alert and Turn Across Path systems are not yet a part of the Euro NCAP programme.”

In 2008, the original Volvo XC60 was the first to be launched with standard-fit AEB. Back then, it was a relatively basic system which functioned at low speeds, car-to-car.

“The AEB systems on the new XC60 can handle a full range of different driving speeds and environments and will also detect vulnerable road users and even large animals,” said Avery.

The Volvo XC60 was not the only vehicle to receive praise for the levels of safety offered to drivers. Two other new vehicles were highly commended by the panel of expert judges – the Volkswagen T-Roc and the Subaru XV.

Today, standard-fitment of AEB on new cars has reached 61%. But only three of the SMMT’s 10 best-selling cars in 2017 had AEB as standard across all trims, while number one seller the Ford Fiesta only offers this potentially life-saving technology as an option.

“Achieving a five-star Euro NCAP rating without standard-fit AEB will be close to impossible for vehicle manufacturers from 2018 onwards,” continued Avery.

“Many market AEB as an optional extra but with its potential to save so many lives it is far too important not to be fitted as standard. While Killed or Seriously Injured (KSI) accidents affecting occupants are coming down, KSIs involving vulnerable road users such as pedestrians and cyclists are on the increase. Protecting people outside of the car, as well as those inside, is clearly important to our safety award finalists.”

“Standard-fitment of AEB is still not at the levels it should be. Jaguar Land Rover is the only carmaker amongst the top 10 best-selling brands to fit AEB on all new models. While standard-fit AEB penetration for Ford, the top selling brand in the UK, stands at just 7% today,” said Avery.

The Toyota Prius has become the first car to have undergone Euro NCAP’s newest test of autonomous emergency braking technology for pedestrians.

Eight of Britain's top 10 best-selling cars offer five-star Euro NCAP rating, but autonomous emergency braking is available as standard on only half of them.