Technology and training help, but Michal Duda’s best asset in managing 577 ambulances is his experience as a driver 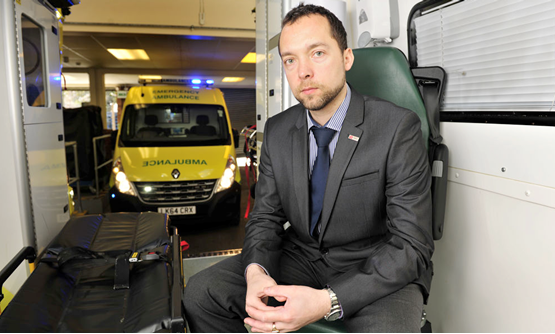 Who better to understand the business needs and whims of drivers than a former driver?

Michal Duda started his career on the road for a medical services operation, which gave him the ideal background to engage drivers when he eventually moved into a fleet role.

His first taste of fleet came a decade ago when Duda moved into the fleet office at Lewis Day to oversee servicing schedules and workshop maintenance for the company’s 1,000-plus vehicles.

When the organisation was broken up and sold in 2009, he remained with the medical business – now called Medical Services – taking responsibility for one of its stations, with a fleet of 100 vehicles. Four years later, he was appointed fleet manager for Medical Services’ 450 ambulances and nine sites, six of which have workshops.

“My experience as a driver has helped a lot when making judgements between the manager’s world and the driver’s world,” says Duda.

No of workshops: Six

“I take every driver seriously and whatever problem they might have with the vehicle, I don’t ignore it.”

This level of involvement can see him respond to 30-40 vehicle-related matters every day, ranging from minor issues to breakdowns and accidents.

“We don’t look to find blame with the driver; we find the genuine fault or the causes of any issue. I can understand the driver statements, the road conditions and the vehicle conditions because of my experiences on the road,” says Duda.

“By making sure their concerns are heard, the crews feel valued and engaged. This helps to maintain the fleet and they tend to look after the company resources and equipment as if they are their own.

“This culture of engagement is very important to help prevent breakdowns and incidents.”

It appears to be working. Following the introduction in 2014 of a new training and induction regime, the company’s incident rate has fallen by a third, with the majority of accidents now low-speed manoeuvring scrapes.

During their application process, every potential new recruit undergoes a 20- to 30-minute road risk assessment with one of Medical Services’ instructors, based on bluelight standards. They also sit a theory test based on the Highway Code.

If successful, they receive further training on manual handling and driving as part of a two-week induction, before being employed on a six-month probation. Additional training can be arranged if Duda identifies any issues.

“Candidates get the job only if they are a good driver,” he explains.

Since being appointed fleet manager in 2013, Duda’s fleet has grown to 577 ambulances. He has nine types of vehicle including emergency/front-line ambulances, high- dependency, passenger transport, wheelchair access and some cars.

More than 300 are based in London, with other concentrations in Bedfordshire/Hertfordshire, Manchester and Shropshire. He also has some vehicles covering Wales and Birmingham.

Following a recent change of ownership – Danish company Falck is now the majority shareholder – Medical Services will expand further into the provision of emergency services vehicles. It already supports the likes of South Central Ambulance Service, Yorkshire Ambulance Service and South East Coast Ambulance Service after introducing a first response service two years ago. As a consequence, Duda anticipates his fleet will grow to about 600 over the next 12 months.

Medical Services currently buys almost all vehicles outright, primarily in batches, with the decision to change based on age (typically six years), equipment compatibility or wear and tear. However, Duda is considering switching to a contract hire model and the  company’s finance team is currently looking at the cost-benefit analysis.

He expects the new funding method to be introduced later this year, but Medical Services will keep its maintenance provision in-house.

“We need mechanics that know our vehicles and how to treat them with all the conversions and electrical elements,” says Duda.

“They aren’t vans anymore; they are different products. Our mechanics maintain our fleet to our expected level due to their knowledge and expertise. They can fix problems in hours when it would take a dealer days.”

The majority of the fleet is Renault Master for large vehicles and Peugeot Expert and Partner for smaller vehicles. It also has some older Ford Connect and Fiat Doblo vans.

“We recently introduced some Peugeot Boxers. I am looking at their utilisation and reliability to give us a second model option when we expand,” says Duda.

They need to cope with exacting conversion requirements, which, in addition to coping with the medical needs of patients, must also minimise the risks to crew and patients during transit.

Feedback from crews is always considered when specifying a vehicle. Following such input, Medical Services fitted front-line vehicles with power-load stretchers, which require minimal manual handling by paramedics. Other vehicles have manual ramps rather than electrical, which helps to reduce downtime due to maintenance.

“We want to make our fleet driver-friendly and patient-friendly,” says Duda. “We have hands-free communications systems on every vehicle, comfortable seats, and back-rests for wheelchair users to protect their heads in case of an incident.

“We have also gone from rails on the floor to pinpoints because they were gathering dust and were a contamination risk.”

Utilisation is a daily priority for Duda. His first task when appointed was to look at fuel procurement and refuelling frequencies, which he did by introducing a basic tracking system. He then introduced new workshop maintenance schedules, which require at least 20 services to be carried out each week.

“This gives a flow of servicing, so we never get into a backlog situation,” he says. “We never take vehicles off the road just to do a service; they are all done as part of routine maintenance.”

Duda assesses every vehicle based on the revenue it brings to the company versus its costs. Any vehicle that falls short of his productivity expectations is scrutinised to find out if it is actually required by the unit or could be deployed elsewhere.

“We also look at downtime, the number of hours a vehicle stays on the road and how many shifts it does,” he says. “It helps us to squeeze as much life as we can out of each vehicle.”

With many vehicles operating a day shift and a night shift – full driver checks and cleaning take place between each – the workshop team has a policy of taking every vehicle off the road for at least one day per week for a full check.

Such pre-emptive action reduces the likelihood of faults occurring and can, says Duda, “give a vehicle at least another year of operation”.

Duda cares deeply about his fleet and his ambulances, including what happens to them after de-fleeting. He has agreements with a number of agents, who search for buyers, and many of his ambulances end up as school minibuses. However, quite a few also go to places such as Africa, Turkey and even Jamaica to begin a second life of providing medical support services.

“We work with charities as well, where we provide them with our ambulances at the end of their life with us,” Duda says. “But it’s not their end of life. They still have a role to play in saving other lives.”

Traffilog has been installed in 230 vehicles, with the expectation that all new vehicles will also contain the system. Falck has been closely involved in developing the telematics system for its own needs over the past couple of years.

“We will be using it to monitor driver behaviour, as a logging device, as a traffic light system on the dash, and for the G-sensors that are hard-wired into the vehicle,” says Michael Duda.

“We will know the real mileage, fuel levels, engine temperatures and the driver . We will use the behaviour information for their development programmes – we want to promote the best drivers and coach the ones that are at risk.”

Medical Services will also use the data to defend its drivers in the event of an incident or if they receive a complaint from a patient about the quality of the journey.

From about 3,000 journeys a month, Medical Services typically receives two complaints. In about two-thirds of those cases, it finds no fault with the driver.

“We give the feedback to the patient with the proof,” says Duda. “This is seen by the crews as a positive tool.”

He is also considering introducing a rewards programme for the drivers achieving the best behavioural scores.