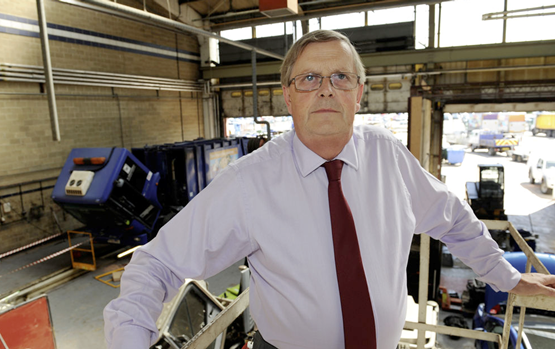 The role of fleet manager is most definitely not an insular one. With multiple stakeholders within the business or organisation to satisfy, in addition to suppliers and service providers to manage, the role requires a substantial amount of communication and cooperation.

For Phil Clifford, whose role as fleet and technical manager encompasses services for both St Edmundsbury Borough and Forest Heath District Councils, the concept of working together is vital.

“If it is road-legal and registered as such with the DVLA, it is part of our fleet and our responsibility,” he says.

Not only does Clifford manage council relationships and a workshop team, he also holds a specific interest in the growth and development of fleet management.

He has been involved in a national initiative to develop a guide to fleet procurement, which he says is one of the most complex areas of working in public sector fleet.

“We invited both suppliers and buyers, to come and talk about problems, myths and look for a way to develop links going forward,” Clifford says.

“Public sector procurement is regulated, but still a bit of a minefield for those who aren’t au fait with it. Fleet management can be picked up if you’ve got half a brain, but procurement is awash with things that can go wrong. The purpose of the group is to develop a best practice guide that’s accepted by both sides of the coin, and that we get a more clearly defined route, and everyone finds it easier to deal with.”

The guidebook is set to cover guidance for working within purchasing frameworks, writing and selecting tenders, and on what suppliers should include in their responses. Clifford says it should help make procurement more open, honest and transparent for all involved. “It’s early days,” he says. “We’re only starting on the broad outline of it, but for me it’s timely. I want to try and raise the profile of the fleet management industry.”

He also wants it to be useful to those new to fleet. Encouraging new blood into the industry is important, but Clifford believes the role of a fleet manager isn’t as well known as it should be. “We’ve got a severe issue with career awareness,” he says. “Young people leave school, don’t know what it is, and perhaps don’t see it as a career. Organisations see it as just something to be done rather than a cornerstone of operations, so it won’t get the ‘top-down’ attention it deserves. The majority of fleets are at the lighter end, where the only regulation is the road traffic act, and some businesses think just anyone can do it. In theory they’re right, but in practice there needs to be career development. I am also involved with the Chartered Institute for Logistics and Transport, and its aim is to engender people into the industry, but it’s difficult. Organisations who’ve outsourced, who don’t have their own workshops, haven’t got the young people to bring up through the ranks and train up.”

Clifford says recognition from the industry is ever more important in helping people progress.

“We look to ACFO, ICFM and the FTA, with great qualifications that make people more marketable and hopefully develop their careers,” he explains.

On Clifford’s own fleet, the shared services agreement across both councils began in 2012, and has seen significant benefits in flexibility and service levels.

“Predominantly, each council’s vehicles work in their respective area,” he says. “But they are contiguous, and the advantage of the shared services agreement is that, when we look at route planning and scheduling, we do cross boundaries.”

With the exception of cars, the vehicles are all outright purchased and liveried under the same ‘West Suffolk’ combined branding so can be used ‘out of area’ if required.

All staff cars are leased, with a pool car fleet of 10 vehicles – predominantly outright purchase. The implementation of a travel plan has increased usage of the vehicles across the council, and they are also available for use of Suffolk County Council staff who share the site.

“A number are on flexi-rent with Northgate,” says Clifford. “So if demand drops, we can get them off fleet pretty quickly – or add to the fleet.”

“Because we own them, we can be very flexible at end-of-life,” Clifford says. “We look to get eight years out of a vehicle but, as they approach defleet, we assess their condition and suitability to their role, and may keep the vehicle for another year or so. There comes a point when environment, technology or corrosion will become an obstacle. The average mileage on our light commercial fleet is 6,000 a year, so mechanically they are pretty sound, and well maintained.”

The majority of vehicles on fleet are diesel and, while Clifford has explored alternative power in the past, he says wholelife costs are a little way off at present because of the low mileage of his fleet.

“On the sort of miles we do, it takes an awfully long time to get payback,” he says. “While fuel cost is important, you’ve got to do a massive saving to make any impact.

“We took on some Ashwoods hybrid Transits a few years ago, but there’s no real payback. We’re constantly looking at electric and hybrid – they all work and are very good – but if it increases our expenditure we have to be sensible and wait at present. We’re a local authority, and we have to achieve best value for our customers, the ratepayers.”

Drivers are now starting to show interest in alternative fuels, and in certain cases the savings are worthwhile. “You can buy electric cars for not much more than conventionally powered cars now,” says Clifford. “One of our drivers has asked for an electric B-Class. For him, it stacks up as his mileage is local. But we’re in a rural area, and for many of our staff, it’s not yet feasible to go pure electric.”

Clifford’s team operates a workshop, which maintains and services all commercial vehicles. The facility includes an MOT station, which is also open to the public.

“My personal view is that, in most cases, it’s cheaper to do it yourself than to pay another firm to do it,” he says. “But if you don’t manage your operation properly, it can be more expensive. The question isn’t whether the services are in or out, it’s about managing your operation to make sure you’re getting best value for it. Every authority I’ve worked for has had its own workshop, but it has to be an efficient workshop. The real benefit is the ability to manage downtime. In-house, we can turn vehicles around so much quicker than outsourced providers.”

Operating a workshop put St Edmundsbury in a strong position when it came to the shared services agreement with Forest Heath. In fact, the authority had already been maintaining its neighbour’s vehicles for a number of years before the larger deal.

“The more efficient we got, the less utilisation we had, so an agreement like that helps fill our capacity,” says Clifford.

Today, the workshop also provides maintenance and vehicle repair for a number of public sector and quasi-public sector organisations, including MOTs for the police, along with service, maintenance and repair (SMR) for local dial-a-ride services and a housing association. More work means better utilisation of facilities and provides an additional revenue stream.

Having the workshop team and engineering knowledge at hand offers additional benefits when procuring vehicles.

“Once you start specifying bespoke vehicles, engineering knowledge is important,” says Clifford. “Yes, talking to drivers is important, but talking to the workshop team helps from a cost point of view. When you’re investing large sums of money into a vehicle, the ability to keep it on the road and reduce downtime is paramount.

“Talking to people and peers is important – learning from others’ experience is vital. Buying what you want and what you need are two different things: you need to get personal preference out of your brain and pick the best tool for the job. It’s another reason we’re developing the procurement guide. When you go out to tender, you shouldn’t specify exactly what you want down to every nut and bolt. Start by saying to suppliers ‘this is what we want it to do’.

“Looking at the output is the best place to start. Engaging with the market means we can say ‘this is what we think we want, but if you have a suggestion, let us know’. A big part of my job is meeting suppliers. It may feel like a burden but, if I don’t know what’s coming out on the market, I’ll never develop and evolve. An open mind is paramount. The more suppliers and manufacturers engage with fleets, the more they can pick up from us on our needs and requirements.”

Further investment in workshop facilities is around the corner, too. The combined authorities, together with Suffolk County Council, are developing plans for an operational hub with new, enlarged facilities on the outskirts of Bury St Edmunds.

If approved, the facility is due to open by late 2018, and that will include an ATF lane for the testing and approval of HGVs.

“At the moment, our site is old and not really designed for ‘customer facing’ business,” Clifford says. “The brand new, state-of-the-art workshops will be a little more commercial in their outlook, and give us far more potential to expand further.”