University of Cambridge: We can’t ignore our own carbon footprint

Cambridge is one of five universities in the UK to be awarded Go Ultra Low Company status but the drivers had to be won over first. 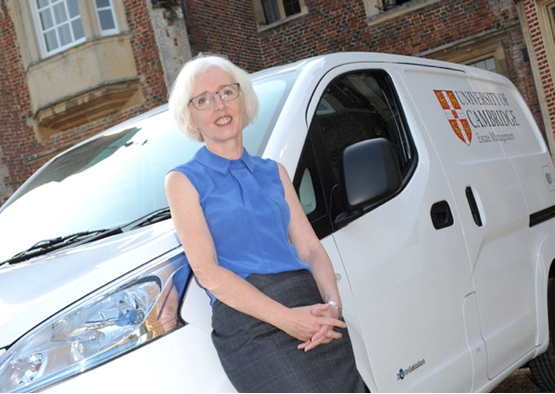 Four years ago when the University of Cambridge introduced its first electric vans – two Renault Kangoo ZEs to be used by its postal service – its estate maintenance staff didn’t believe the day would come when they, too, would be sitting in electric vehicles.

Although most of their journeys are short distances within the city boundary, making them suitable for an electric vehicle’s range, they have to carry tools and equipment to service the estate’s grounds and 365 operational buildings, and the Kangoo ZE’s payload could not match the equivalent diesel van.

However, with the launch of an EV with a bigger payload (the Nissan e-NV200) in 2014 the university had the chance to convert the drivers to electric.

“We had trial vehicles in and that just changed their minds completely; they absolutely love them,” says Christine Leonard, senior technical support manager, who is responsible for the estate management department’s 52 cars and commercial vehicles, the largest fleet of vehicles at the University of Cambridge.

Nearly 30 departments run vehicles and plant, although typically they each have just one or two vehicles. The engineering department has the second largest fleet with around 30 cars, vans and minibuses. The vehicles are looked after by maintenance managers and facilities managers.

The estate management department now operates eight Renault Kangoo ZEs (six joined the original two last year for use where payload is not an issue), five Nissan e-NV200s (with a further two under conversion to chiller vans for use by the catering section) and a Polaris Goupil pick-up truck, which is used by the grounds team as it fits the requirement for a small utility vehicle.

The university also has 15 electric bikes, which are popular for getting around the city, especially with supervisors and managers who need to travel for work and don’t carry tools.

Cambridge was recently one of five universities in the UK to be awarded Go Ultra Low Company status in recognition of its use of EVs and its commitment to buy more.

It has pledged that by the end of the decade, 20% of its fleet of 100 vehicles will be electric, although Leonard has set the bar higher for estate management. She hopes 50% of her fleet will be electric by 2021.

All the EVs are purchased outright using Crown Commercial Service framework agreements, which can bring significant savings on the basic list price, dependent on which EV is chosen and which framework is used.

However, Leonard acknowledges that if the plug-in grant was removed “it would be very difficult” to continue acquiring EVs and she would have to slow down the replacement cycle, which has been set at four years for the new vehicles.

She also has concerns about what price the EVs will fetch at defleet.

“I am slightly anxious about the residual values of EVs because it’s not that clear yet,” she says.

“It’s a bit ‘suck it and see’. If it comes to the end of the four years and we’re not going to get a decent amount then I might keep them going because they seem to be very low maintenance and the batteries are proving quite resilient.”

“Value for money is important to the university but the carbon saving is more important,” Leonard says. “We are investing a lot of money in research to help tackle some of these problems so we can’t ignore our own carbon footprint.”

Estate management saved nearly 4,000 litres of fuel and 10 tonnes of carbon for the university’s financial year ending July 31, 2016, compared to the previous financial year, thanks to a combination of running more EVs, driver training and fitting telematics to the vehicles.

The cost of installing charging units and the environmental impact of charging the vehicles has been reduced by the university’s electrical engineers installing them and linking them to the building management system so the use of electricity is metered.

The vans are typically charged at the university’s Laundry Farm site on the edge of the city and are on trickle charge.

Timers have also been installed so the university can take advantage of the low cost tariff.

The university has a number of other charging points at sites across the city for use by staff and visitors.

Leonard would like to introduce solar power at Laundry Farm to further lower the university’s carbon footprint.

“The building there would lend itself to solar power,” she says. “It’s one storey so we could put solar panels on the roof.”

She is also planning to install a weighbridge at the site to reduce the risk of the electric vans being overloaded.

“Our nearest weighbridge is a little way down the road,” she says. “I want one that is going to be linked to a system where I can have the data in front of me.”

The EVs have proved reliable, according to Leonard, and also help overcome the issue of clogged diesel particulate filters, which can be a problem with low mileage vehicles.

The university’s security vehicles, which operate on a 24/7 rota, are still diesel and the drivers are warned to watch out for the regeneration light coming on.

There are currently five pool cars – three at Greenwich House and two at Laundry Farm. “I am going to try to reduce that to two or three and have a couple of electric cars and one diesel or petrol car for longer journeys,” Leonard says.

She is also introducing a driver training course specifically for the new Nissan e-NV200s.

All job-need drivers in the estate management department have already been through a standard half-day training course with Business Driver earlier this year.

“It’s not always easy to get the maintenance drivers to sit down at a computer,” Leonard says. “It’s much nicer for them to get out and speak to the trainer and ask questions and then there is an assessment of their driving skills with a risk assessment.”

Telematics was introduced to the estate management vans to look at vehicle utilisation but it also measures driver behaviour. Over the past two years, the fleet’s overall risk score has reduced by nine percentage points.

The drivers have bought into the use of telematics as the system has proven their innocence in several incidents.

“One of my drivers was accused of hitting a vehicle in a car park in Peterborough on a Saturday so I sent the tracker data to show it was parked at work,” Leonard says. “He would have been under suspicion if we hadn’t had the trackers. There have been about five separate occasions where the trackers have been used to protect people.”

While most fleet managers favour tele-matics reports on driver behaviour which only highlight the worst offenders, Leonard would like a system that reports on all of the drivers. “If you’ve got 100 people that are regularly speeding and you’re only going to see 10 of them and not the rest, to me, that isn’t right,” she says.

Her next step is to introduce FleetCheck’s fleet management system, which can bring together telematics, fuel card and driver licence checking data.

She also wants to set up a fleet manager group with the other university departments so they can meet and share best practice.

“I’ve already had contact from two of the facilities managers who look after fleet asking about how to buy EVs, the cost and the grant, so it’s been quite nice being able to tell people how to go about it,” she says.

Strategic thinking is forte of non-driver

Running the estate management fleet typically takes up 20% of Christine Leonard’s time. The rest is spent on estate facilities, working on maintenance, and asset management of the university’s 365 operational buildings (as opposed to the college buildings, which are run separately by each college).

The management of the Addenbrooke’s Hospital site is split between the NHS and the university, and is a “highly complex building”, according to Leonard.

“Quite a lot of my job is strategic,” she says. “I’m helping develop asset management policy and strategy, and quality management systems.”

She adds: “I’ve got a really good team so they take care of vehicle maintenance, getting the servicing done, and also help me with driver records and licence checking.

“For me, it’s more the strategic part of deciding what vehicles go into the fleet, how much we can reduce it by and persuading the managers to think differently about what kind of vehicles we have.”

Leonard had never done fleet management before joining the university in 2012 (her background was in procurement and contract management, including mobile phones and computers) and she got to grips with the industry by reading Fleet News and attending events.

She is not a petrol head and, in fact, doesn’t hold a driving licence.

“I can stand back; I am not entranced by sports cars,” she says. “I am just looking for things that will help our guys with their jobs, keep us safe, be within the legislation.”

Cambridge green challenge pursues different ways to get around the city

Reducing business and commuter travel is an important part of the university’s carbon reduction plan, known as the Cambridge Green Challenge.

A dedicated environment and energy team, which sits within the estate management department and includes a transport manager, is responsible for introducing measures to help meet the target. “I’m looking after the vehicle fleet but the transport manager looks at the whole strategy for transport,” explains Christine Leonard.

“The head office moved out of the city centre to near Madingley park and ride, so near the West Cambridge site, and there was a massive drive to get people to think about public transport and cycling,” Leonard added.

“We invested in a big pool of bikes and extended the amount of electric bikes and put together a cycling policy. I   helped with that.”

The university also has a car-sharing scheme and car club, subsidised bus travel for staff, and video conference facilities.