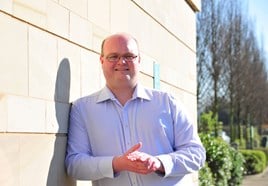 “If someone needs medication you cannot say ‘oh sorry the van is off the road, you’ll have to wait until tomorrow’,” he says. “Failure is not an option. You’ve got to make sure patients get the medication they need on time.”

Well Pharmacy’s 700-plus van drivers deliver prescriptions to communities, hospitals and prisons throughout the UK. The company also operates 119 company cars for various field roles, such as regional development managers, and has 86 cash-takers.

James’s goal is to make the fleet as efficient as possible and telematics, which has just been rolled out to the van fleet with anticipated savings of £990,000, will play a key part in that (see panel, page 24).

Fleet responsibility was added to James’s role 18 months ago, as a result of a change in company ownership.

He was previously home delivery manager at the Co-operative Pharmacy, which was sold to the Bestway Group in October 2014 and re-launched as Well Pharmacy a year later.

“My role was previously operational, looking at the way the service worked, nothing to do with how the vans worked,” James says.

“I’d ring up the transport department and say ‘I need a van here, sort it out’. To see the other side of that has been a real awakening.”

He now spends 20% of his time on fleet and 80% on the operational side, supported by two coordinators.

He likens the move from being part of the Co-operative Group to becoming a standalone business to the experience of leaving home for the first time.

“When you set yourself up as an independent business you suddenly find that all these things that mum and dad used to do, like paying the bills, you’ve got to do yourself. And the challenge we had was the timescales in which to do them.”

From October 2014 to April 2015, the Co-operative transport team continued to manage the fleet on a transitional service arrangement.

“It gave us some breathing space to set ourselves up because the pace at which things were changing was pretty significant,” James says.

“Following that transitional period they continued to support us with advice, and point us in the right direction if we got stuck. It’s like ringing your parents up for advice when you’re starting out in your own house. ‘I can’t work out how to do this, what’s going on?’ It’s very much that sort of relationship.

“The support the transport team at Co-op has given us has been tremendous.”

James is keen to stress that he inherited the fleet in good shape and it was simply a case of taking the Co-op’s model and seeing how it fitted in with Well’s business aims and whether things needed changing or enhancing.

His first step was to rebrand the 450 Peugeot Bippers with the new company name and logo.

“When you’re dealing with vulnerable patients in the community, it’s important that they know it is your van pulling up,” James says. “It gives them some confidence that it’s us, as opposed to them seeing a hire vehicle.”

The vans also need to be visible from a safety point of view and, along with fitting reversing sensors, James got Well’s newly-appointed rebranding partner CGI to come up with a number of options.

“We’ve put chevrons on the back door, very similar to a utility vehicle, but in pharmacy colours,” he says. “We’ve also put white stripes all the way down the side so that when they’re pulling out at dusk they’re more visible.”

The rebranding was done over a three-month period.

“We worked with Peugeot to make use of the network to facilitate that rebranding process,” says James. “June, July and August was our window of opportunity to get it done before the new registrations came out in September, so it was tight.

“The three parties worked flat out to get that done on time and on budget.”

James has had positive feedback on the new branding.

“The Co-op vans were fairly plain in their design and as soon as we rebranded them I had people from around the business emailing me saying ‘we’ve seen the vans – they look amazing’,” he says.

Once the Co-operative pharmacy brand was officially retired in October 2015, James’s next step was to review Well’s leasing provider, Lex Autolease.

Bestway Group, which has a separate fleet function to Well, buys its cars, vans and HGVs, but contract hire works best for Well, according to James.

“We have a lot of autonomy and what works for them doesn’t necessarily work for us. They understand that, and let us get on with it,” he says. “We work in very different industries.”

“That was a continuation of what happened within the Co-op and we assessed that that was the right thing to do for our business,” James says.

“We had been building that relationship as an independent business for a year and Lex Autolease was very supportive throughout that process.”

Accident management, uninsured loss recovery and credit hire are outsourced to Lex Autolease, along with maintenance.

“We use the expertise that they have to manage a lot of the processes,” James says.

He acknowledges that using one leasing provider means “putting all your eggs in one basket”, but “it depends on your appetite for managing multiple vendors and multiple systems”.

Well has a bi-annual benchmarking process to make sure the contract is still delivering best value.

James has also decided to stick with the Co-op’s risk management provider, Intelligent Data Systems, which is now part of The AA. It handles driving licence checking, driver profiling and training, and grey fleet management.

One significant change James has made has been to award a three-year contract to Volkswagen Commercial Vehicles (VWCV), which took effect at the start of this year.

“We went out to see a number of drivers with one of the fleet engineers from Lex Autolease to look at the options required, what they were using the vans for, what niggles they had with them, what they liked about them and what options were required,” James says. “From that we did a paper-based exercise to get the right manufacturers round the table.”

VWCV’s ability to offer a like-for-like replacement when a van was off the road was a key factor in the final decision.

With the right suppliers in place, the next step is to work with them to get added value.

Among the areas James is looking at are petrol vans for low mileage drivers, lowering the CO2 emissions cap from 130g/km to 125g/km, and then 120g/km, and more analysis of accident data to identify trends and make improvements.

“Telematics will help us to do that,” James says. “It will allow us to understand what kind of driver behaviour is impacting on those accidents.

Well Pharmacy is anticipating saving around £990,000 through the use of telematics on its van fleet.

The business case has been primarily built on operational efficiency and utilisation.

The system, which has just been fitted to the entire van fleet, is helping to identify bottlenecks at Well’s 780 pharmacies across the UK.

“You might find a branch is waiting for a prescription and the driver is sat in the branch waiting when they could be out doing something else,” James says. “That’s probably where the biggest area of saving is going to come, by freeing up that time to do something productive. They can go and help out in another branch or go on a prescription collection round. Or it might be that we look to alter the way the driver works. If they turn up at 9am and nothing happens until 11am then we start them at 11am. It’s making things more productive.

“And it allows the leadership teams in those areas to focus on efficiency within those branches.”