Yesss Electrical: One week to build a fleet

YESSS Electrical’s fleet has been vital to the company’s success, but when Paul Holden joined the fold, it didn’t even exist. Gareth Roberts reports 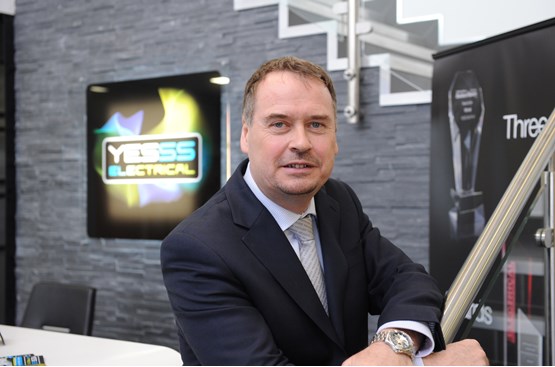 Running an accident repair business and operating an out-sourced fleet management service, Paul Holden was happy with his lot.

A mechanical engineer by trade, he had established the repair business in the 1980s before branching out into fleet management.

However, that was about to change for good when in 2012, while on holiday in the Canaries, he received a call from a former colleague.

“He said to me ‘we need somebody who can help us with the fleet and we need help very quickly’,” Holden explains.

He was being offered a blank piece of paper to establish a fleet for a new venture which was geared for massive growth, but required a fleet of cars within a matter of weeks. It was a challenge Holden couldn’t resist.

The new business was the brainchild of Adam and Ashley Mackie, grandsons of Thomas Mackie, an ex-GEC employee and former Royal Air Force radio operator, who founded City Electrical Factors (CEF) in Coventry in 1951.

It grew into a multi-million pound global operation but, following their grandfather’s death, a complex family fall-out and an even more complex court case, the pair were free to build an electrical wholesale business.

“The first meeting was held at Heathrow, because people were flying into the country from all over the world,” says Holden.

The Mackies had hand-picked a team to deliver YESSS Electrical (the YESSS stands for Your Electrical Supplies, Service and Solutions) and Holden’s role was to provide the cars and vans for the business to grow at a rapid rate.

“I was told they needed 50 cars in a week,” he says. Luckily, he could tap into more than 30 cars he was running through his accident repair business. The rest would have to be purchased outright.

Contract hire was not an option; there was no credit history for the new enterprise, there wasn’t even a footprint, just a business plan and a war chest of several million pounds.

Holden decided to base himself out of his existing office just outside Doncaster and, with the business starting to recruit, cars were quickly seen as an important tool to attract the best talent to drive it forward.

He says: “Right from the beginning, the brief was they wanted drivers excited about the vehicles.”

It was essential to establish terms with the major manufacturers and get funders on-board. Holden explains: “You have to build relationships and structure quickly, because otherwise it’s just chaos.”

“They surprised me,” says Holden. “I think, because we were so transparent in what we were doing and who we were, they were prepared to get involved.”

TCH Leasing was quick to get manufacturer support and, with the first 40 vans on order to be purchased outright, offered to take the risk and contract hire 30 of them instead.

“It was tremendous,” he says. “Instead of having to spend £500,000 on 30 vans, I could contract hire them, fully maintained and at the right money, which meant it was less of a drain on the business.”

There was however, still the problem of insuring a fleet with no claims history. “I think I met every insurance company in those first few weeks,” says Holden.

By using the claims history and the fleet policy of his own business, he was able to persuade a number of insurers to offer him terms.

The pieces were beginning to fall into place, but there was still the small matter of delivering the company’s first liveried van for a launch party.

It would be the star attraction and would be unveiled at the company’s new Castleford headquarters in front of 80 influential guests.

The owners wanted a livery to shake off the traditional image of the industry so they employed the services of a top designer and insisted on a van finished in black metallic paint.

However, getting a Ford Transit in black metallic paint wasn’t going to be easy when faced with a lead-in time of more than 16 weeks and the ‘big reveal’ only a couple of months away.

Holden managed to source a long-wheelbase unit for £19,000 and had the vehicle ready to go just days before the launch.

“That was the first time it felt like YESSS existed,” he says. “It was a tangible asset; it was a YESSS van.”

Within the first year, the fleet had grown to more than 300 vehicles, with 250 cars and 80 vans serving 80 branches located across the UK.

Four years later and the fleet has almost doubled in size. The company now operates some 400 cars and 150 commercials, and the number of branches has grown to 95, with a further 25 in the pipeline.

In terms of commercial vehicles, the fleet is currently split 50:50 between Ford and Mercedes-Benz, with Holden using a mix of Sprinters, Citans, Transits and Transit Connects to deliver the goods.

But in the company’s first year the commercial fleet was Ford only, as Holden got to grips with choosing vehicles that would be fit for purpose.

He says: “The thing about the electrical wholesale industry is everything is in three or four metre lengths, like conduit.

“You can get a 3.1-metre length from back seat to back door on a long wheelbase Transit – in a Transit Jumbo you can get 4.25 metres.”

However, delivery times needed to be addressed. With the company growing at such a rate, YESSS Electrical required two or three vans a month so, with TCH Leasing’s help, suppliers were persuaded to have vans on standby.

This meant that as soon as a branch was opened Holden could have a vehicle ready within the week.

The vans are all on contract hire and fully-maintained through TCH Leasing on a three-year/90,000-mile replacement cycle.

Holden has made safety a priority for the YESSS van fleet, insisting on all commercial vehicles being fitted with reversing cameras and sensors, and an audio warning system. All vans are also fitted with telematics, with Holden having an overview of operations, while each branch has access to the system to manage its own vans.

“If a driver hits six points, we would then decide whether to send them on a driver training course or not,” explains Holden. “All new drivers will do an online test and then additional training will be provided where necessary.”

The focus on safety has paid dividends for YESSS, with its accident frequency rate at 18.9% per 100 vehicles in 2015. It has also been accredited by the Fleet Operator Recognition Scheme (FORS), receiving the bronze award and currently awaiting a decision on its application for the silver standard.

The fleet has come a long way since Holden received that phone call in 2012. YESSS Electrical is now one of the UK’s fastest growing companies and is the fourth largest electrical wholesaler in the UK, employing 800 people and delivering an annual turnover in excess of £160 million.

Company car choice at YESSS Electrical is seen by senior management as a vital tool in recruiting the right staff to drive the company forward.

When the company was first starting out, cars were purchased outright, but Holden now employs a mix of short-term leases and contract hire.

With 400 cars on the fleet, some 60 vehicles are still owned outright and 40 units are on contract hire, but the remaining 300 cars are on a ‘28-day-plus’ lease arrangement.

Holden is a big advocate of 28-day-plus funding. “When you weigh up the flexibility it offers you in a volatile employment market against being tied in for two or three years, it’s fantastic, while costs are comparable to a longer lease,” he says.

Vehicles are divided into groups and are quoted on the initial term and monthly mileage, with maintenance included. The car is provided until the end of the agreed term, when it is either returned, extended or swapped for another car.

Holden says: “We avoid any early termination costs and it means employees have cars ready to go from the off, without having to wait for them to be delivered.”

Every new starter is immediately enrolled on to the 28-day-plus scheme. Once established at the company, a more traditional contract hire arrangement is made available to them through Alphabet or TCH Leasing.

Replacement cycles and mileages vary on contract hire. Holden explains: “The owners would like the fleet to look as new as possible within the budget available so that’s what we’ve had to facilitate.”

He has tried to introduce a more traditional banding-based choice list, but says “senior management don’t want to restrict choice while the company is still recruiting”.

Cars are also seen as an important tool for driving the aspirations of existing staff in a company which prides itself on promoting from within its own ranks. “The cars in the car park are important,” says Holden.

Average emissions are 110-120g/km despite YESSS not having an emissions cap. “Due to benefit-in-kind tax levels, low-emission vehicles become self-selecting,” he says.