“Electric vehicles are the future – there is no escaping it” 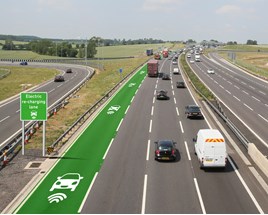 Ultra-low emission vehicles (ULEVs) are becoming a more common sight on UK fleets, with this growth set to continue as manufacturers and companies aim to reduce CO2 emissions.

The latest Department for Transport (DfT) figures show that a total of 35,305 cars with CO2 emissions of 75g/km or below were registered at the end of June, compared with 12,200 on the same date last year.

Research from the latest Fleet200 – the UK’s biggest 200 fleets across 10 industry sectors – backs this up, with those organisations operating more hybrids and battery electric vehicles (EVs) than before.

But what does the future hold for fleets, and what are the implications for the UK’s road and power infrastructure?

Fleet News: Why haven’t more EVs been adopted by fleets?

Colin Herron: I went to an electromobility conference and every country in Europe said “we’re going to have one million EVs by 2020”, so I asked the question: “Where are you going to get them from?” Nissan can only make 50,000 a year and it was the only company producing them.

The targets set for 2020 were just fictitious, they couldn’t be done. Consequently, they were seen as a failure. But they were never going to sell the figures out there – there just isn’t the capacity to make them. The challenge is to move fleets from the internal combustion engine to something with an electric drivetrain.

What is the difficulty? Well, the public wants everything: we had the volumes and the dreams of governments, but we had no infrastructure when we started and we need a business model. We had bits of it but we didn’t have all of it together, unfortunately.

Denis Naberezhnykh: As well as considering the environmental angle, it has to be a business decision for the private sector fleet operator. We have seen big movements happening towards EVs, however. One particular example is British Gas which has chosen to convert a large proportion of its van fleet to electric vans, while we are seeing a lot of taxi fleets also converting to EVs. A lot of companies are interested in the technology, but it becomes quite a complicated decision to make when they consider the charging infrastructure, the restricted range and the costs. However, those that invest the time into understanding what works for them are usually ready to adopt EVs.

FN: How can obstacles, in particular restricted range, be overcome?

DN: My typical response is that if the worry is range, that can be overcome through a combination of using the right technology, whether that is the vehicle or the charger, and ensuring you have the correct utilisation of the vehicle. It’s an operational issue rather than a barrier that can’t be overcome from a technology point of view.

Replacing a vehicle on a fleet with an EV is not necessarily a like-for-like replacement. You can do that, but that provides a limited amount of flexibility.

A fleet needs to understand what it is using its vehicles for and then have a selection of ULEVs – probably a combination of plug-in hybrids, range-extenders and battery EVs – which offer all of the flexibility needed to fulfil the fleet’s function and save money in the process. I think that’s something a lot of fleet operators miss. They look at an EV and say “that doesn’t have sufficient range for what we need to use it for, so let’s not worry about it”. It actually tends to be the vehicle operators with the highest mileages who are also the ones that would benefit the most from EVs, so it is worth fleets spending a little bit of time and effort to understand what works for them.

FN: Electrification of vehicles can be done in a number of ways – battery EVs, mild hybrid, plug-in hybrids and range-extenders – but can the diversity of ULEV technologies deter fleets from considering them?

DN: Yes, absolutely – but that’s just the future. The days of us having one type of vehicle that does everything we want it to do are behind us. In the future, we’ll have a combination of different vehicle powertrains that will be suitable for different purposes and there is no escaping it.

Every manufacturer has an electrification programme and every one has a range of electric or plug-in vehicles that they already or will offer. There are already many electric cars, while vans are some of the most attractive vehicles to convert to electric, particularly those that operate within city limits. They do huge amounts of miles, but over a fairly well defined duty cycle which presents plenty of opportunities to stop and charge. It will be a transition from internal combustion engines and, essentially, those who are not making the transition now will find themselves lagging behind when the rest of the fleets become decarbonised. However, it will take some effort to begin with, as any change does.

FN: Will wireless power transfer technology, which would give EVs the ability to charge while travelling on certain roads, allay concerns over battery range?

DN: Wireless power transfer sounds like a very attractive solution. We, as an independent and impartial research laboratory, have to be clear that we are not advocating it as the only solution but, based on the research and the evidence that we have seen, it certainly appears to be a very good one.

The concept of wireless power transfer is quite simple in that you have a coil on the ground and a coil in the car, and once you put one over the other and they’re working on the same frequency and power level, you get energy transfer. Wireless power transfer should allow vehicles to travel without using any battery charge. You could be in a situation where you went to the highway and at the very least you leave the road with the same level of charge, but in the best case scenario you leave with your battery fully charged. It’s an attractive concept.

One of the interesting conclusions from our feasibility study is that fleet operators of commercial vehicles particularly stand to benefit from wireless power transfer. Car users do a relatively small amount of motorway mileage and it’s relatively unpredictable, whereas commercial vehicles continually do a large amount on fairly defined routes. If a dynamic wireless power transfer system existed to support those operations, we can go from a situation where we are now where you can’t have an electric truck – simply the technology doesn’t exist – to a situation where you could have an electric truck that could operate purely on electricity for the vast proportion of its journeys. The cost savings which would arise out of that are enormous for operators, but you would also require a huge amount of infrastructure.

CH: I can see domestic wireless charging working, so you leave the vehicle on a driveway above the charging technology and you get 3kW, 7kW or 10kW going through, but for the life of me I cannot work out how you could justify electrifying three lanes of the M1 to charge a car when it costs around £3 to charge it for around 100 miles.

At the moment it seems Highways England thinks it is feasible to induction-charge lorries going down the M1. I think this is complete and utter lunacy. Running cables the full length of the M1 to transfer enough power into a lorry is so far away it is a splendid waste of taxpayers’ money.

FN: Can the UK’s electricity infrastructure cope with high levels of EV uptake?

CH: Depending on the number of EVs, you could have the scenario of what happens if 30 million EVs all go home and plug in? Do the lights go out? At the moment, it is estimated up to one million vehicles at peak period will have no impact at all. We don’t need extra electricity. We make enough at night to run the country twice, but we don’t need it. We just use it at the wrong time.

DN: Whether there is a real danger of EVs being plugged in and causing an overload on the network is still undetermined, but a number of projects have been carried out around the world, including the UK, to try and validate this.

We certainly think there is enough capacity in the National Grid to allow EV operation. You can imagine that if everyone goes home from work at 6pm and plugs in their EV, then that could be an issue, but the reality is that this is not going to happen because even now we have technology that will balance out when the vehicle is charged. This means you can plug in your vehicle at 6pm but it doesn’t mean it’s going to charge immediately – it may start charging later. That kind of peak could be smoothed quite comfortably and one of the projects we’re just starting is for the Energy Technologies Institute to understand what kind of impact a nation charging EVs will have on the grid and how can we mitigate it.

The issues that haven’t been understood yet are around high power transfer, such as rapid chargers where you don’t have the flexibility to tailor the timing of the charging. When you are talking about a large number of commercial vehicles which need recharging because it’s crucial to their business, you can’t just tell them to recharge later because they need to charge then, otherwise the vehicle can’t be used. That’s when it could become an issue.

FN: Will hydrogen vehicles have a big role to play in the future of UK road transport?

CH: My personal opinion is that hydrogen is a non-starter. I do not think this is going to happen in passenger cars. The cost of making 99.99% hydrogen is expensive and there is no sensible way to transport it. If you look at the RV1 full hydrogen bus in London, until recently the hydrogen came on a barge from Rotterdam. Shipping is not entirely environmentally friendly when you are towing barges.

I do think there is a potential for trucks and commercial vehicles to use hydrogen, but in areas that already have the fuel, such as industrial areas: Teesside has got an enormous amount of hydrogen it doesn’t know what to do with, so have south Wales and the north west. You can run buses and all sorts in those regions on hydrogen. Will Cornwall be a hydrogen economy? No, because how do you get it there? So will we have a hydrogen transport system? My opinion is absolutely not.