How do your fleet policies shape up against the rest? 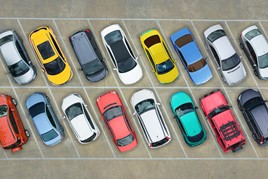 UK business has opened its fleet list to a widening range of car manufacturers, according to the findings of exclusive Fleet News research, with the biggest companies most likely to offer the greatest number of choices.

In this first article (part two will be published at the end of September), we look at vehicle choice and restrictions applied, perk car versus job-need and the criteria for essential users, and driver eligibility. The research enables companies to compare and contrast policies with those of their peers, by fleet size and industry sector. 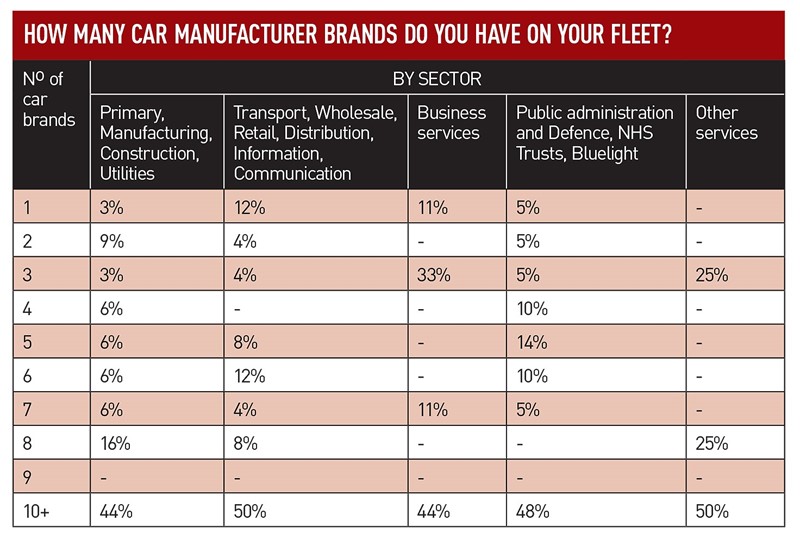 Almost half of respondents (46%) say they offer 10-plus brands on their car choice list. The proportion rises as fleet size increases, peaking at 90% for those running more than 500 vehicles.

In contrast, just 7% of fleets with up to 25 vehicles allow such a broad range of options. Instead, these small operators tend to favour tight restrictions, with 19% allowing just one brand.

With small fleets unable to flex the purchasing muscle of large businesses, opting for one brand gives them the best chance of securing a better discount. Among the sub-25 vehicle fleets, 71% offer no more than five brands to their drivers.

These operators are also the most likely to operate essential user vehicles, with 96% reporting  job-need cars against an overall average of 83%.

There is little difference among key industry segments when it comes to vehicle choice, with more than 40% of construction/utilities, transport/retail/distribution, business services, public sector and other services offering 10-plus brands on fleet.

However, almost half of public sector fleets (49%) are more prescriptive, offering up to a maximum of six brands, by far the largest proportion to limit choice to a handful of preferred suppliers.

A decade ago, as the UK emerged from recession, the priority swung away from HR-influenced policies towards finance-led decisions, with many businesses reducing choice lists as they looked to eke the greatest amount of volume-based discount from their manufacturer partners.

Drivers accepted these moves as employment opportunities were limited. Were the days of the car (perk or job-need) as a valued benefit over?

The Fleet News survey suggests emphatically not, as companies look to exploit the car as a way to recruit and retain the best staff by adding more brands to their lists. Some businesses are also reacting against a rise in interest for taking cash, particularly among higher rate taxpayers, by making their choices more attractive to employees.

The need to appeal to staff appears undiminished by whether they are perk car drivers or essential users, with the latter accounting for 83% of drivers, although it is likely that perk car drivers will have access to the widest choice.

Companies across all industry sectors say at least 80% of their drivers are essential users, with public sector reporting the lowest proportion at 80% and other services the highest, at 94%.

This is much higher than in the Fleet News Fleet200. Among the UK’s biggest fleets, 71% of drivers are essential user; 29% are perk. Those proportions will be hoisted by the presence within the Fleet200 of more companies in financial services, retail and communications where perk proportions are higher.

Job role is the overwhelming criterion used to define an essential user. Almost nine out of 10 (89%) respondents base their decision on this yardstick. However, 18% say annual mileage is also a factor and 12% take salary into consideration.

The largest fleets (501-plus) are most likely to base decisions partly on mileage – 50% said this was a key criterion compared with 79% using job role. This group was also the only one to consider the number of external meetings per year (7%).

These businesses were all in the transport/retail/distribution industry sector, which used the broadest range of criteria to define essential users: 90% job role, 25% annual mileage, 10% salary and 5% external meetings. No other criteria were considered by any of the fleets surveyed.

Companies in the other services segment were most likely to use two criteria: job role (100%) and salary (25%), while construction/utilities often applied up to three: job role (88%), annual mileage (19%) and salary (19%).

When cross-tabulating the criteria with funding methods, companies that leased their cars without maintenance tended to apply the most indices to their essential users, with all of them using job role, 40% also applying annual mileage, 20% salary and 20% external meetings. 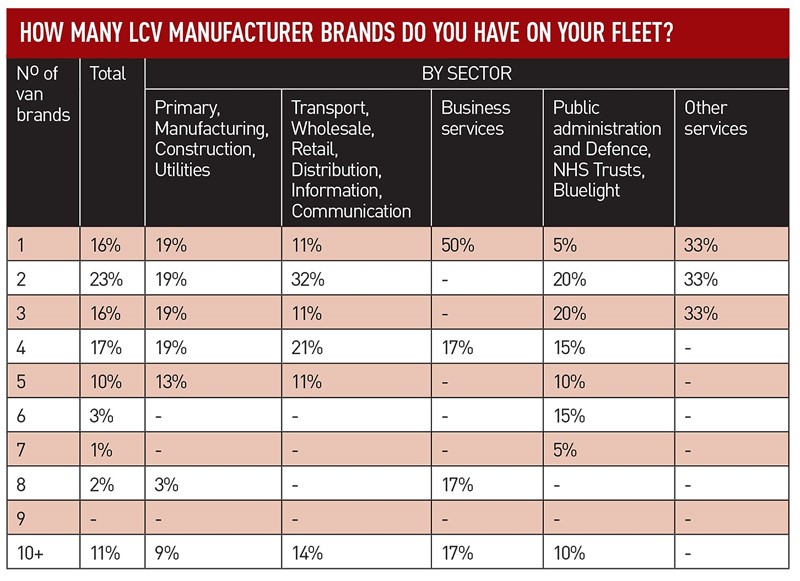 It’s no surprise that van choice is far more restricted than cars among UK business. These tools of the trade are selected for their suitability for the job as well as their total cost of ownership. Driver appeal sits further down the agenda.

The survey reveals that 82% of companies operate five or fewer van brands, while 39% have just one or two manufacturer options.

The only antithesis is among 501-plus fleets where 42% have more than 10 light commercial vehicle brands. That’s possibly because they have a wider range of operational needs each of which requires specific models for the task.

Those operating the broadest range tend to be in the business services and transport/retail/distribution sectors.

Despite expanding their company car choice lists, businesses are still implementing a number of restrictions to control the type of models their drivers can select. These often have an environmental message. Just over half (51%) implement a CO2 cap, 40% dictate fuel type and 42% limit body style options. 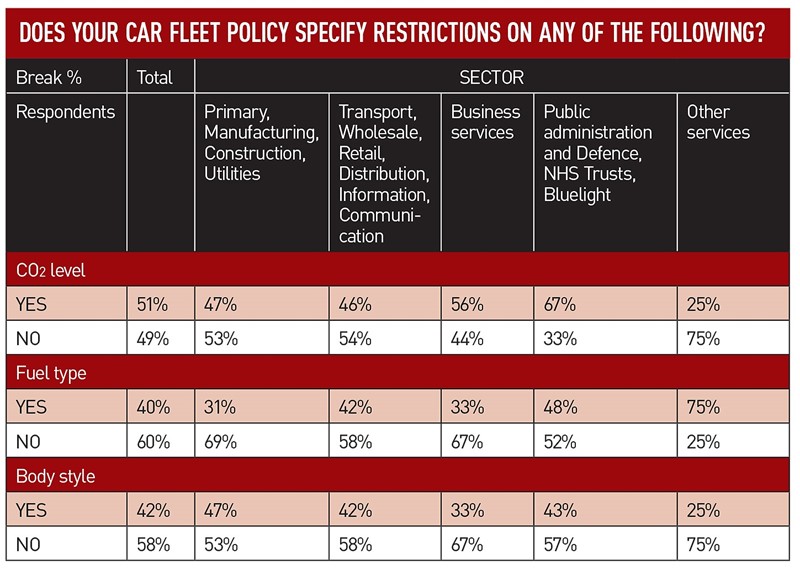 Fleets in the public sector are most likely to have a CO2 cap (67%) as they work to reduce their impact on the environment in line with Government expectations, followed by those in business services at 57%. Least likely are businesses in other services – just 25% employ a CO2 limit.

Caps are much more likely to be in place for fleets that use some form of leasing product, with more than half of those funding via finance lease or operational lease implementing one. In contrast, just 38% of fleets buying outright have a CO2 cap.

Fewer companies have a restriction on fuel when it comes to their car fleets. Most still offer an open choice of petrol or diesel and, increasingly, electric, whether hybrid, plug-in hybrid or full EV. Some have moved away from diesel, but equally, some still specify diesel as the only option – indeed 90% of respondents say they have diesels on fleet.

Fleets employ a range of policies when it comes to eligibility to drive company cars. Just 13% restrict access only to the driver for essential user cars, and 14% for perk cars.

More than half (55%) say other company drivers are eligible to drive essential cars, while 55% grant access to the driver’s spouse or partner – there’s likely to be substantial crossover between the two. However, it’s a different matter for children, with 8% of companies allowing them to drive, while just 8% say anyone can get behind the wheel with the driver’s permission. 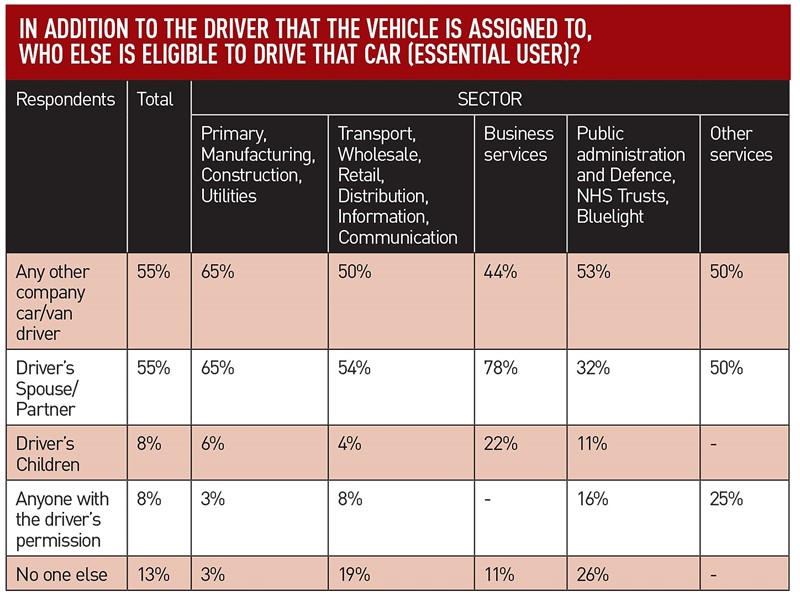 The largest fleets (501-plus) are most lenient, with 70% permitting other company drivers and driver’s spouses/partners, 15% their offspring and 10% anyone with the driver’s permission.

Meanwhile, organisations in the public sector are least likely to give the green light. More than one quarter (26%) say no one else may drive the car, and just 32% allow spouses/partners.

Construction/utilities fleets are most likely to allow other company drivers and spouses/partners to drive an essential user car – 65% say both groups are fine.

The figures for perk cars reveal a much wider mix of policies. At one extreme are the handful of companies in other services, all of which say anyone can drive the car with the driver’s permission. However, 20% of public sector fleets and 20% of transport/retail/distribution fleets say no one else can drive their cars.

On average, 45% of fleets say spouses/partners can drive a perk car, 10 percentage points lower than for essential user cars. Construction/utilities and business services are most likely, with 63% and 50% respectively – both are lower than essential users.

It’s not entirely clear why companies are more prescriptive about perk cars than they are essential user cars; perhaps it’s because these cars are more likely to be premium and, therefore, more expensive to insure for multi-driver usage.

Whatever the reason, for vans the picture is clearer: 74% say no one else can drive the vehicle. While it’s no bombshell to discover that spouses, children etc. are denied access, it is a surprise that so few companies allow other company drivers behind the wheel.

Just 18% permit this, with the largest proportion in construction/utilities (23%) and business services (20%) where multi-driver vans are more common.

Interestingly, 19% of construction/utilities businesses also allow spouses/partners to drive company vans; the only other companies to allow are the 5% in transport/retail/distribution.