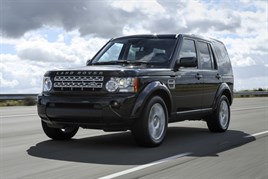 It’s 26 years since Land Rover sought to change the way 4x4s were perceived and marketed in the UK.

Back then, the range comprised the stoic Ninety and One Ten – short- and long-wheelbase versions of the model that would be renamed the Defender a year later, and which had evolved steadily since the first Land Rover of 1948.

The Range Rover was the upmarket 4x4; immensely capable, but exclusive and luxurious.

The new model in 1989 was the Discovery, then only a three-door, but its purpose was to make off-road motoring accessible to people with families.

Its practicality also made it a useful utility vehicle and the concept lives on today.

The award for the fourth-generation Discovery – its second Fleet News trophy in as many years – comes at a time of unprecedented product development and  integration of Land Rover and Jaguar brands.

The Discovery will soon be the oldest model in the Land Rover line-up. The Range Rover Evoque, launched in 2011, sits alongside the Range Rover and Range Rover Sport, both transformed by new-generation models in 2013.

The Discovery won its award on that basis: it’s as comfortable wading through two-and-a-half feet of water as it is patrolling a motorway or laden with equipment towing a trailer across a muddy field. Vehicles with the same breadth of abilities are few, and judges believed the Discovery fulfils the role better than any of the alternatives.

Fleet News: How is Jaguar Land Rover changing the way it engages with fleets?

Chris Newitt, sales director, Jaguar Land Rover: When I joined the company, there was one person responsible for all contract hire and leasing, Motability and rental. It’s too big an area of the market to look after, and was a symptom of how Jaguar Land Rover was perhaps guilty of too strong a focus on retail.

Now we have a field sales team of 22 selling Land Rover and Jaguar products, and we have 50 sites that have local fleet and business teams.

But this wasn’t a manufacturer appointing list. Dealers had to submit a tender and want to make the investment, and also have the opportunity of selling at least 100 extra units to businesses each year.

User-choosers want a retail experience but are funded by their employer. We need to ensure they get a retail experience. We’re ensuring dealer supplies are managed centrally to ensure consistent lead times across the network, and we will have technology in dealers that will allow drivers to see new cars before they are launched and are physically available in showrooms. We need to treat customers as individuals.

FN: Will we see greater integration of both Land Rover and Jaguar brands?

CN: Joint-branded sites often work very well in emerging markets, but in the UK we’re not building any more land. Some sites that are separate in one region will come together, such as what we’ve done in Stockport.

If a site is found that allows both brands to come together that’s fine. If it doesn’t allow it, that isn’t a problem and both sites in a particular area will continue to operate. If we forced bringing sites together it would just inject more cost into the network. We call it ‘pragmatic franchising’.

FN: Many people research vehicle procurement online now. Are the brands integrated there too?

FN: What measures are being taken to make the products more appealing to fleet operators?

CN: We have established a fleet panel across both brands. While this is a global strategy, the UK fleet panel will be split into three different groups with more specific areas. We have a residual values influencers panel, we have a contract hire and leasing managers group, which could have some input into product and specification, and we have a panel of fleet managers who are significant customers. So for the UK they will be specific to different parts of the fleet industry and we will work hard to engage with them and ensure we listen to their opinions.

FN: Land Rover products are now falling into distinct families. How are you defining them?

CN: The Range Rover is about luxury and status; the Discovery is about capability and versatility; the Defender is about ultimate ability off-road.

FN: Land Rover currently offers a V6 diesel-only powertrain in the Discovery in the UK, with four-cylinder diesel and petrol options. There is a hybrid version of the Range Rover. How to you see the Discovery engine line-up developing in the future?

CN: Our own Ingenium engine range is meant to be modular and flexible, but there isn’t a single silver bullet solution to meeting the needs of all customers.

Hybrid is one of the alternatives, while petrol engines have become more fuel-efficient.

We can’t get behind a single solution because customers’ requirements may be different. Hybrid is clearly part of the future, but we don’t really know how much yet. However, we need to cover as many bases as we can, within the limits of our own resources, and we will consider other options as they develop.