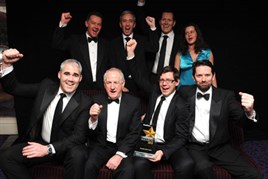 Vauxhall has been through a barren spell in the Fleet News Awards.

Not since the last generation Zafira collected honours at the 2007 ceremony has the company won a model trophy (although it was named fleet manufacturer of the year in 2010).

The Zafira kick-started the compact seven-seat MPV sector when the first-generation model was launched in 1999, ushering in a new era of fold flat flooring and innovative seating configurations.

With the Zafira Tourer, Vauxhall has a produced a noticeably larger car which offers even greater interior space for passengers and luggage alike.

It’s performing well since its launch in 2011, according to Vauxhall fleet sales director James Taylor. Sales last year were 3,315, with 37% going to the corporate sector (by comparison, the Zafira sold 18,401, 68% to fleets).

The Zafira Tourer takes a 20% share in its true fleet sector, with drivers attracted by the low benefit-in-kind rates thanks to its sub-120g/km of CO2 diesel engine.

It’s a Euro6 unit so will come with a price premium, but this is offset for wholelife cost calculations by the tax, National Insurance and fuel price savings.

James Taylor:  The changes to the write-down allowances will help Vauxhall.

We have a large percentage of sales in the 110-130g/km band that are largely unaffected. I believe this will open up a gap between premium and mainstream that will be to our advantage.

We have more engines and powertrain families coming that will bring further CO2 savings. You have to drive down CO2 emissions by 5-10g/km a year to stay competitive.

FN: How much lower are CO2 emissions likely to go for diesel and petrol cars before the technology becomes
too costly?

JT: There are more savings to come but they won’t be as cost-effective as the ones made to date. Improvements will also come in transmissions that will deliver savings on CO2 as well as fuel consumption.

In the near term we see Ampera as the solution and the announcements in the Budget have given us more confidence.

We’ve sold 250 to 300 to fleets so far and company car driver interest had waned but it is starting to pick up and we are cautiously optimistic for this year.