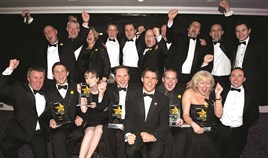 Steve Chater had a good night on March 16, 2011. It was the evening of the Fleet News Awards and BMW was called to the stage on five separate occasions to pick up a trophy.

Not only was there a brace of awards for the latest products using its Efficient Dynamics technology, the company also picked up one of the headline awards voted for exclusively by fleet managers, Fleet Manufacturer of the Year.

The awards came on the back of a record year for BMW sales to fleets in 2010, with 2011 sales already showing further growth.

The 5 Series saloon and Touring models were both renewed in 2010 with certain versions falling below key CO2 thresholds for fleets, with further improvements on the way this autumn, while the BMW 320d EfficientDynamics saloon set a new benchmark for size, performance and efficiency with its combination of 109g/km and 163bhp.

The latest X3 set the CO2 bar lower for compact SUV CO2 emissions and fuel consumption, and, remarkably, offered an even lower CO2 output for the automatic transmission version.

The Mini brand also witnessed growth in corporate sales with the launch of the Countryman version, offering lower-medium hatchback space in a Mini for the first time and taking the brand into the heart of the fleet sector. And BMW is expecting further growth with a new, roomier, 1 Series hatchback now on sale.

Fleet News: The BMW 320d ED seemed to breathe new life into the 3 Series in 2010, and now there is a sub-120g/km version of the 5 Series with the 520d ED. Do you expect this to cause a similar stir in the executive car sector?
Steve Chater: There is a good deal of interest in the 520d ED, but we don’t expect that model to perform as strongly as its 3 Series equivalent. The 320d ED is taking around half of 320d sales, but the 5 series operates in a different sector, where there is a greater preference for automatic transmissions. The 520d ED is manual transmission only. However, the latest 520d automatic with start/stop technology has CO2 emissions from 123g/km, so is still a very attractive proposition. Now only 5% of the cars we sell to fleets have CO2 emissions above 150g/km. We have to continue to work with Munich and strive to ensure the product we have coming through in future continues to be class leading.

FN: Mini products have often been less relevant to fleets because they are effectively three-door small cars, despite their competitive CO2 emissions and running costs. How much of a difference to the Mini brand has adding the Countryman to the range made?
SC: That car continues to surprise people. Mini has been a phenomenal success during the last 10 years with the hatchback, Convertible and Clubman. Although we have enhanced the family with the Countryman, there is a job to do in terms of awareness, and people not really understanding how big the car is. Larger corporate fleets historically have not had Mini on their policies because they’ve seen it as a two-door hatchback. In spite of that, we had a record year for Mini sales in fleet last year, with about 15,000, compared with about 10,000 in 2009, and we hope to continue this drive towards growth with Countryman.

FN: One of the Fleet News Awards was for the BMW X3. Are four-wheel drive vehicles still relevant for fleet operators?
SC: The biggest challenge we’ve had with X3 is securing supply. It has class-leading CO2 emissions and with the current economic climate these things are relevant. We’ve seen similar interest in the All4 versions of the Mini Countryman, and with the recent harsh winters, four-wheel drive can help with keeping fleets mobile and has some appeal with fleets with an eye on duty of care. We have a range of vehicles offering the extra security of four-wheel drive.

FN: Recently we’ve seen BMW preview its electric vehicle strategy for the future. What role will these vehicles have in the fleet market?
SC: Even in fleet we have to think differently about how we mobilise people for work. The BMW i project is very exciting for us. It gives us a great platform to build into an electric vehicle strategy. Although small in terms of the whole fleet market it will be a very relevant part of that market. It will be a mobility solution, not just a car. The Mini E trial provided us with valuable information about people’s real-world experiences with electric vehicles. In the majority of cases in terms of range there car was more than adequate. The i3 and i8 cars we have shown will be built from the ground up as electric cars. These cars are concepts and will evolve further by the time they reach production. A conventional vehicle is built around conventional running gear, which influences its packaging. These cars will give us greater flexibility in packaging. We are also looking at how the expense of lightweight materials might be offset by allowing us to use fewer cells in the batteries

FN: If BMW is continuing to grow in the fleet market, where are your main challenges?
SC: Challenges are all around. When you look at the current market conditions in the UK, we are moving a long a very rocky road, with the threat of a double-dip recession hanging over us. Unemployment is rising, the cost of living is increasing and consumer confidence is low. We don’t know what’s going to happen. We have to continue to focus on our customers. These challenges don’t go away. We also need to continue to work with our dealer network to understand fully the needs of leasing company and end users. We must have the best people in our network and we need to ensure they raise their game to support the needs of customers and leasing companies.

Chater says the Fleet Manufacturer of the Year Award was particularly gratifying because it was one that had the direct involvement of customers, so it is perhaps easy to see why he places such importance on meeting and exceeding customer expectations.

Sustainability is important to BMW and takes pride in having been the top automotive company in the Dow Jones Sustainability Index for six consecutive years.

He sees it as proof that the philosophy behind the EfficientDynamics (and Minimalism) technology in its products is evident in the actions and policies of the whole company.

BMW and Mini will also gain a great deal of visibility next summer after being announced as a leading supplier to London 2012, and Chater believes the company’s record on sustainability was a key factor in it winning its bid.

However, the next immediate task is to launch the new 1 Series to UK fleets. It will be the first BMW model with and Eco Pro function which helps coach drivers in achieving fuel consumption figures closer to the official figures.

All versions of the new 1 Series have higher power outputs than the models they replace, with reduced fuel consumption and CO2 emissions.

“The five-door 1 Series will be a key car in the corporate market,” said Chater.