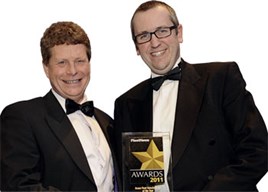 The Green Fleet Manufacturer of the Year Award recognises the efforts and commitments of manufacturers to lower emissions and recognises those that are making a positive contribution to the environment.

With six new products coming to market in the next year, including the world’s first diesel-electric hybrid, all with emissions expected to fall below 100g/km, Peugeot is gearing up to be one of the industry leaders when it comes to low emissions.

The company has made significant strides to improve not only its vehicle co2 emissions, but also to reduce the company’s carbon footprint and support organisations and projects dedicated to giving something back to the environment.

‘Green’, Peugeot claims, is very much central to its strategy. Peugeot points to diverse elements of its strategy such as the electric Ion and the PSA Carbon Sink Project in Amazonia, which began in 1998, to demonstrate its commitment to the environment.

“Every vehicle in every range is the greenest and most environmentally friendly it can possibly be and as cost-effective as it can be for our end-users,” says Phil Robson, director – fleet and used vehicle operations at Peugeot Motor Company.

Fleet News: Peugeot lacks a specific eco sub-brand such as Bluemotion or DrivE. Does that harm its visibility compared with other manufacturers?

Phil Robson: Peugeot does not have an environmental brand and we have received criticism for that but it’s not just about making the cars as green as possible, it is about everything we do.

I think it comes down to being able to consistently offer a range of environmentally-friendly vehicles across our entire range, from the electric bicycles to the low-co2 hyper-efficient small vehiclesto our electric vehicles and vans.

FN: Peugeot Ion has been available since the end of last year – what do you think the challenges are in marketing electric vehicles?

PR: Electric cars are about the whole package – it’s looking at the tax benefits and the different elements of costs that make up an electric vehicle. This is why we promote leasing because it is easier to communicate these cost savings to the end-user.

At the same time we are realistic that electric vehicles aren’t for everyone – they are niche and suitable for a small section of the market.

We are on target to sell the 400 vehicles we expected to sell this year, but it is a difficult economic climate to be talking to people about electric vehicles.

It is about investing in trials and programmes where people can be exposed to our electric vehicles to understand what an electric vehicle is. The Ion comes with an eight-year battery warranty.

We identified very quickly that this was a concern for our customers so we took the decision to take that away from them.

Another is around service and repair so we offer four years’ full service and maintenance included in the lease price.

FN: What was the catalyst for you to invest in developing diesel-electric hybrid technology?

PR: A lot of the feedback on petrol-electric hybrid was positive but some diesel engines were still out- performing the hybrid.

The engineers recognised that the diesel hybrid is the best of both worlds and we have purposely shied away from petrol-hybrids as we believe the real wins will be with diesel. There is something nice about being the first into the market and creating a heritage.

The way forward is bringing the bigger vehicles with high performance and low co2 to market. This is the ground-breaking step that we want Peugeot to make.

The 3008 ticks all of the boxes – it will be an automatic with 4wd and approximately 200bhp with co2 emissions of around 99g/km.

We plan to have a plug-in hybrid of this model late next year, where we will see fuel economy double to somewhere in the region of 140mpg. It is important to stress that this is in a family- sized vehicle.

Our green agenda is about allowing someone who does not want a compromise on performance for lower CO2. This is where key investment is going.