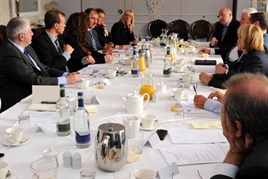 Pump prices have fallen in recent weeks, giving fleets much-needed respite from the long-term rise in the cost of fuel.

However, keeping fuel costs in check remains a major challenge to many businesses and it was just one of the areas up for debate at a recent Fleet News roundtable.

The event, held at Wroxall Abbey in Warwickshire, was sponsored by The Miles Consultancy.

Fleet News editor Stephen Briers: What are you doing to manage fuel costs?

Paul Boulds, head of transport and fleet at Daniel Contractors: Against where we are and where we were, we’re saving in the region of £8,000 per month in fuel reimbursements by choosing the Ford Mondeo 1.6 TDCi Econetic instead of the Mondeo 2.0 TDCi.

There was some initial resistance from employees, but we won them over by demonstrating that they wouldn’t be out of pocket.

Whatever the manufacturers say, you can’t achieve the quoted miles per gallon, so we trialled the cars’ performance against the price of fuel and the advisory fuel rate.

We had to achieve around 52mpg for the drivers to break even at 12p per mile. The cars achieved 55mpg (official figures are 65.7mpg).

We’ve also reviewed our commercial vehicles and by the time we’ve finished, more than a third of our vehicles will have stop-start technology.

On the back of that, we’ve looked at speed limiters for our commercial vehicles.

But, with some vans operating mainly on rural roads and not motorways, it wouldn’t reallyhelp, so we chose a rev limiter and make sure mpg is monitored against individual drivers.

Paul Jackson, managing director of The Miles Consultancy: Not every company can invest six figures in these sorts of technology though, so you’ve also got to consider other ways of monitoring fuel spend.

Sandra Clews, fleet manager at Diversey: We considered telematics, but we decided to take the mileage audit approach.
We highlight when people are filling up at motorway service stations where fuel is typically more expensive and make sure our managers take responsibility for their staff.

Ronnie Wilson, fleet manager at NG Bailey: We work with our fuel card provider and we get regular reports which identify any drivers that fill-up on the motorway. We can see where the savings are and act on them. In the past three years we have probably cut motorway service filling station usage by 50%.

PB: Telematics is fantastic and it’s given us real insight, but you’ve still got to have a keen eye. We use suspect transaction reports and anything that doesn’t look right is investigated.

Angela Gittings, guest services manager at Ashridge Business School: We have a tiny fleet in comparison to many operators, but we’re very focused on green issues.

Maggie Moore, transport manager at Ashridge Business School: We want to make the fleet as sutainable as possible.