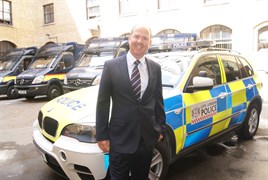 The City of London Police has looked to fleet management software company Jaama to improve its administration efficiency as well as its management reporting capabilities.

The force is responsible for policing London's leading financial and business district which is referred to as the Square Mile.

Mouton explains that the force turned to Key2 after outsourcing its vehicle service maintenance and repair workshops to Amey a couple of years ago.

He says: “Our previous fleet management system was not compatible with our workshops’ system. Logically it made sense to introduce Key2 and our confidence in the system was confirmed by the experiences of other users of this system, like the British Transport Police.

“All vehicle maintenance data from the workshops can now be easily uploaded into our asset management system thereby saving significant administration time.

"It makes perfect sense for the two systems to ‘talk’ to each other and cuts duplicate entries of the same information which also removes the opportunity of errors creeping in.”

Mouton adds: “Vehicle mileages are recorded and downloaded directly into Key2, which then interprets the information to provide vehicle servicing schedules based on mileage and time which is crucial.

"That helps to meet our risk management responsibilities.”

In a further move, the City of London Police’s Human Resources department is looking to move and consolidate all driver-related information, including licence and eyesight check details, on the Key2 system.

Also, fleet management information from a range of third party suppliers including fuel card and tyre providers will be fed into Key2 at a later date.

Mouton says: “Key2 will enable the force to have all information relating to vehicles and drivers in one place.

"That will result in improved management reporting and we hope result in significant operating cost savings.

"When we're asked to give a report - possibly as a result of a request resulting from the Freedom of Information Act - that's where the benefits will come in.

"We're already noticing how much better we're able to structure the data and that helps to provide the complete picture.

Mouton anticipates that the reduction in the administration burden will also bring cost-savings in time.

"Compatibility is the big thing"

The contract with Jaama took around a year to implement from its initial conception.

And Mouton's advice to other fleet managers is unequivocal: "I think that compatibility is the big thing.

"You need to ensure that the systems you have in place talk to each other - both in terms of the data you're importing and what you need to export as well.

"Work closely with your provider to ensure that you get a good feeling about them and ask precisely whether their software will be able to cope with all of your requirements while also being user friendly.

"We've already noticed a reduction in vehicle downtime and there are obviously benefits in terms of duty of care."