Chevin Fleet Solutions: ‘The 27-year-old business operating like a start-up’

Chevin Fleet Solutions has transformed its approach to fleet with a new strategic plan and a better understanding of what operators want and need from fleet management software.

The changes include new appointments, revisions to the operating platform and a different way of thinking about its customers’ requirements.

Example one: until five years ago, the UK board consisted of one person – founder and managing director Ashley Sowerby. Now he has a team of three (finance director, sales director, operations director) plus additional non-exec support, which will enable greater focus on the day-to-day business.

Example two: Chevin has switched from a scattergun approach, going after everyone and anyone in fleet, to a targeted one which sees the right customers (typically job-essential fleets) matched to the right products.

Example three: rather than offering a wholly modular system, Chevin is now providing a more comprehensive base platform with all the best bits included.

Sowerby explains: “FleetWave is like Lego; we come with a big box of bricks and ask ‘what do you want us to build?’. But people don’t want that now; they want a system with all the best practice built in. So we looked at our product and why people buy it.”

He has also created a library of user stories which will be used to show other fleets how Chevin has solved problems using its software solutions.

While FleetWave remains the primary platform, it has been pre-configured as an all-inclusive fleet software system, although users can still add extra functionality.

“So, we have the block built ready, although fleets can still add more bricks if they want,” Sowerby adds. 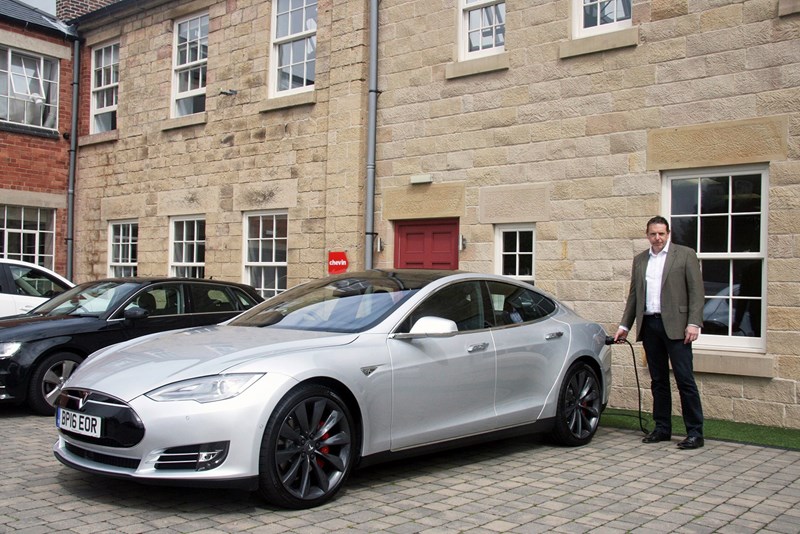 The new outlook is part of Sowerby’s strategic vision to double global revenue over the next couple of years, including in the UK, Chevin’s largest market. In his words, Chevin is “a 27-year-old business operating like a start-up”.

At the same time, Chevin has updated its user interface, offering a better, more visual log-in experience that is fully responsive for smartphones with a cleaner home page dashboard. Customers can add their own graphics and logo to have a branded site.

“We are also going deeper into analytics, doing more with the data but also increasing the level of automation so the system pushes to the fleet the things it needs to know about rather than them running reports,” Sowerby says.

“We are changing from tables to visual reports with colour coding to help users to identify the good and the bad.”

The next step, due for launch this month, is Chevin 365 as part of the Chevin Academy online video training service.

Chevin 365 will enable fleets to go to an app-style store to drop ‘widgets’ onto their home page, adding new reports such as fuel use.

Rather than having to make the request via Chevin, the fleet will be able to self-serve.

The fleet management functionality of FleetWave is pretty much a given in today’s software market, according to Sowerby.

It’s the additional elements that make the product stand out, he claims. This includes its ability to integrate up to a dozen other systems, such as fuel cards, telematics and licence checking, enabling it to become a hub for data.

“This means we can provide analytics to clients that adds value and gives the return on investment, e.g. utilisation and usage patterns,” Sowerby says.

He also puts a lot of emphasis behind a programme dubbed ‘Fiona’ – fix it once, never again.

Every time Chevin receives a support ticket, it instructs its team to work out what it would have to do to have never received it, asking ‘how could we prevent that question or issue from ever arising again?’.

“It’s a real mind-set approach and it drives a lot of our change,” Sowerby says.

One of those changes will see the introduction of FleetWave Forms later this year, which create a two-way flow of information between the fleet and the driver.

Incorporating areas such as daily inspections, defect reporting, mileage and driver communications, the system will create a channel for the driver.

“At the moment, the software is uni-directional, i.e. you can send the driver a message.

But FleetWave Forms is a two-way communication,” Sowerby says. “We are investing in the product, such as extending the API (application programming interface) capabilities .”

Chevin has not seen any curtailing of demand for software in the face of any uncertainly created by the Brexit referendum and recent general election.

While Sowerby detects a certain nervousness by some customers, he points to the fact that, as a way to help companies reduce cost, software can benefit from a constricted economy.

Many of his conversations are now taking place at director level rather than fleet, which is symptomatic of the fact that FleetWave is no longer just a fleet management system, it also plugs into other business operations such as HR, purchasing and finance.

However, Sowerby doesn’t seek to deliberately bypass the fleet manager.

He believes any organisation with an operational fleet should have a dedicated person overseeing the management of the vehicles, and is not convinced about outsourcing.

“If you outsource, you are single-sourcing and that is not a good business process,” he says. “It is cyclical – everyone thinks there is a better way to do it.

“A third party has a different agenda – to keep your business and fund your cars. Software reduces the need to outsource by focusing you on the areas that need focus. It’s the freedom to manage without being distracted by the micro detail.”

He adds: “The conversation shouldn’t be ‘do we in-source or outsource’. It should be ‘what’s the purpose of the fleet’. If it’s just for the mobility of an employee, is a fleet needed? In Europe, we see this changing a lot, although in the UK we are still ingrained with our cars.”

Chevin’s willingness to open up its API gives it a front-row seat as the market moves towards mobility. Sowerby believes the future for cars is less about ownership and more about user-ship with companies forgoing the need to own or lease cars permanently.

For Chevin, mobility is about access to data and data aggregation. It’s about integrating with HR systems to understand vehicle usage as part of a mobility budget, but Sowerby recognises his own limitations.

“The challenge is where others are there already, such as Google maps which give routing and travel options. We can’t compete with that, so we plug-in to the best of breed and present that back to the operator,” he says. “APIs open up so many possibilities.”

Invest in software to cut costs

The primary reason why organisations invest in fleet software is to save money, according to Ashley Sowerby.

It could come from improved utilisation of vehicles, fuel management or risk management – all these and more provide an opportunity to show a return on investment.

A typical FleetWave installation will replace five or six IT systems, such as internal workshop, HR, expense management, service jobs and asset management, such is its flexibility.

Many of these processes sit outside of the conventional fleet, leading to a number of customers renaming the software system to remove the fleet reference. Wave is a popular substitute.

Chevin also has small fleet operators on its RoadBase system, although it stopped selling the software at the start of this year.

A new version under development is due to be launched later this year, which, says Sowerby, will “re-open the market for us”.

Chevin Fleet Solutions has completed a deal in the Democratic Republic of the Congo as part of its expansion into international markets.

In response to emerging technologies and user-demand, Chevin has launched an API tool for its fleet management software, FleetWave.