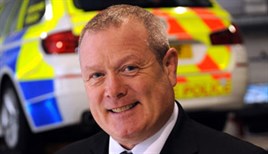 Few fleet managers have the opportunity to run modern workshops; fewer still are effectively given a sketch pad and asked to design their own facility.

Cheshire Constabulary head of fleet services John Heussi earned that enviable position from a fleet career at the force stretching back 30 years.

The workshop in question, at the Winsford head office, is the beating heart of Heussi’s fleet operation; that was an important factor in his close involvement over the design and layout.

Now eight years old, it remains as functional today as the moment when the ribbon was cut.

The facility handles all of Cheshire Constabulary’s SMR work and has the equipment and skills to ensure the fleet is MOT exempt. An effective MOT is carried out during every service.

Key to its efficiency is basing staffing levels on mileage per technician, rather than the more commonly used vehicles per technician.

Heussi explains: “Servicing is based on mileage so it makes sense to base our staffing levels on mileage. We travel 11.4 million miles a year – as much as some of the largest police forces.”

Servicing is carried out every 10,000 miles interspersed with component checks based on Cheshire’s maintenance data.

All new vehicles are pulled in after 6,000 and 8,000 miles for a components check which determines the future servicing parameters.

Consequently, the service schedule for some vehicles has been shortened to 8,000 miles.

This includes the armed response units which are driven every day at 95% gross vehicle weight which puts additional strain on the brakes and transmission.

“Vehicle availability is our god: if we maximise that, it keeps the fleet small,” says Heussi.

“We piloted a scheme two years ago to assess why vehicles might not be available.

"Now, at every service, we change front and rear sidelight bulbs – the savings we make on reduced breakdown and recovery far outweigh the cost of changing the bulbs more regularly.”

Those bulbs are also long-life which means they last almost double the time of the cheap bulbs which garages tend to fit, as well as producing a brighter light.

“We also change the brake fluid on every service for the rapid response vehicles because of the degradation in high pursuits,” Heussi adds.

All new ideas go to a small team for implementation and testing; if successful they are rolled out to the rest of the fleet. One of Heussi’s biggest successes was in the reduction of vehicle collisions.

While the nature of police work means there will inevitably be some major crashes, the majority of claims are for low speed manoeuvring incidents. This has been tackled by installing reversing sensors.

At the same time, a write-off avoidance scheme targets the more significant damage.

If a vehicle is in danger of being an insurance write-off, Heussi has an agreement in place to request additional support from his bodyshop supplier and the manufacturer to bring the costs down.

As Heussi puts it, if the car is written off, there’s no business for the bodyshop and no replacement parts for the manufacturer; both are therefore open to the conversation.

“As long as it’s not a safety issue, we will look to avoid writing a car off because of the high capital cost to replace it – both from buying a new car and converting it,” he says.

“This initiative has saved 12 write-offs in its first year.”

As Cheshire Constabulary self-insures its fleet, the savings are massive. The sensors and write-off avoidance scheme combined have cut collision repair costs in half,