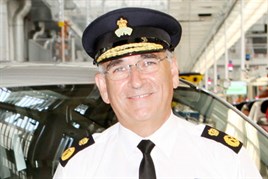 It costs £124 million a year to run the RSPCA and, with no funding available from the Government, the not-for-profit organisation relies entirely on charity contributions to keep it operating.

Around one in every two households owns a pet and the RSPCA receives on average a call for help every 30 seconds.

Caring, rescuing and rehoming animals is an expensive business and, with costs continuing to rise, the fixed budget the RSPCA allocates every year is becoming increasingly tighter.

Saving money on operational costs, especially the fleet, is crucial as it has a direct impact on the number of animals the charity can care for.

Chief inspectorate officer Kevin Degenhard has been working at the RSPCA for the past 38 years and admits that rising operational costs are putting the organisation under extreme pressure.

“Everywhere is under financial pressure and we at the RSPCA are feeling it too,” says Degenhard.

“We employ specialist people and scientists and campaign for animal rights but we are not Government funded and the more costs increase, the harder it becomes to do our job.”

As well as supplying transport for the animal hospitals, clinics and rehoming centres, the 630 drivers and 470 RSPCA inspectors are out in the community answering emergencies and rescuing animals up and down the country 24 hours a day.

Primarily a diesel fleet, the replacement cycle for vans is five years/100,000 miles and for cars four years/80,000 miles.

The majority of the inspectors operate LCVs and are based at home, though some vans are housed at animal centres, wildlife centres and hospitals as pool vehicles.

Cars are primarily business need and supplied to other departments such as farm animal welfare, RSPCA branch support services and legal teams.

Some of the senior management teams also receive a car though this number is starting to decline in favour of a cash-for-car scheme.

Total mileage travelled per year is in the region of 8.5 million miles, with an annual fuel bill of around £2 million.

The fuel bill is crucial: every increase of 1p at the fuel pumps costs the company an extra £40,000 a year. Because its budget is fixed, the more the RSPCA spends on fuel, the fewer the number of animals that can be treated and rescued.

The fleet uses fuel cards and reducing fuel costs is, understandably, a key area of focus for the RSPCA.

The organisation recently invested in Trimble’s GeoMaster software in a bid to reduce fuel consumption and improve driver behaviour.