Grey fleet is a vital part of the overall mobility solution for many businesses yet new research from Driving for Better Business (DfBB) highlights a worrying lack of awareness about some of the key risks and how to manage them.

The survey questioned more than 250 executive directors and in excess of 1,000 employees who drive for work, exploring the underlying attitudes and behaviours that persist in organisations where employees drive their own cars for work-related purposes. And, while the DfBB survey covered a number of topics, the answers around grey fleet were some of the most concerning.

The first issue highlighted by the report is the possibility that the size of the national grey fleet could be far bigger than thought.

Recent estimates have put grey fleet at around 14 million vehicles, which has grown from estimates of around a million 10-12 years ago. That is probably more a reflection of the growth in awareness rather than the growth in the actual size of the grey fleet.

DfBB’s research reveals that 90% of those surveyed use their own car for business, with 75% doing so at least once a week. 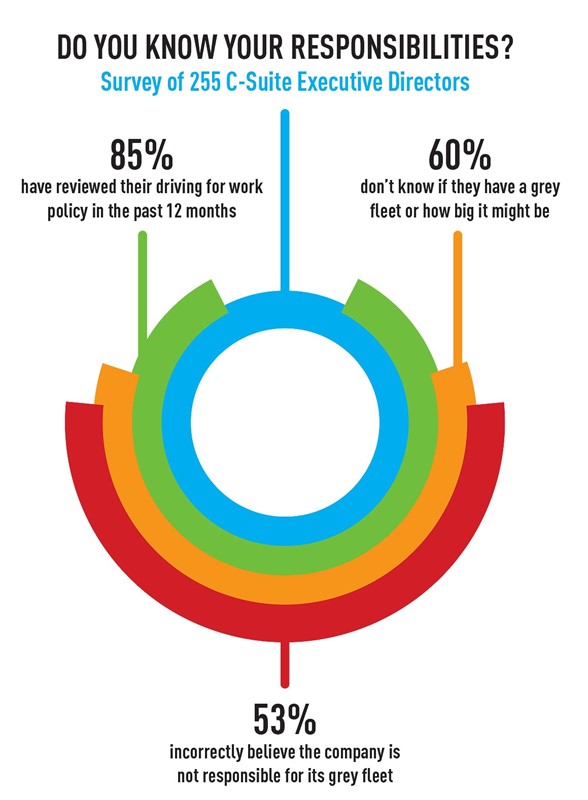 With company cars, vans and trucks totalling a business vehicle parc in excess of 5.5 million vehicles, the fact that nine times as many employees said they used their own car for business journeys should be of huge concern from a risk management point of view. The fleet and risk management industry, together with operators and business owners, have clearly still got work to do to fully understand the grey fleet phenomenon, including who is affected and what their obligations are.

There is an apparent lack of awareness by the executive directors surveyed as to their responsibilities for grey fleet. These are not just managers but C-Suite board directors who have a legal responsibility to ensure the organisation operates compliantly within current legislation and guidance. Worryingly, 60% of these directors did not know whether any of their staff used their own vehicles for work journeys or, if they did, how many there were. We doubt there are many readers of Fleet News who don’t understand that grey fleet drivers need to be managed in exactly the same way you would manage company car drivers, yet more than half (53%) of the directors did not believe a grey fleet driver was the company’s responsibility at all.

One positive piece of information to come from the survey is that, more than 85% of directors had reviewed their Driving for Work policies, with the vast majority having done so within the past 12 months. If your directors haven’t done so, then they would appear to be in a small minority. An interesting adjunct to this is that age appears to play a part. Nine out of 10 directors under the age of 55 had reviewed their Driving for Work policy in the previous 12 months yet that fell to six out of 10 for those directors aged over 55.

Another positive was that 75% of directors said they ensured that grey fleet drivers were aware of their obligations and responsibilities while driving for work. However, this stat failed to stand up when we drilled down into specific actions and asked drivers what their employers did.

Some 68% of directors said their company shared its Driving for Work policy with its grey fleet drivers yet less than half (45%) of those drivers  said they had seen it and just over a third (34%) had never had their driving licence checked.

Probably most concerning was the fact that a staggering one in every three grey fleet drivers (33%) confirmed they did not have cover for business use on their motor insurance, meaning they are, effectively, driving while uninsured.

Think about that for a moment – 60% of directors didn’t know how many grey fleet drivers they had and 53% didn’t think it was their responsibility, which it absolutely is. And 90% of drivers classed themselves as grey fleet and a third of them admitted they weren’t insured for business use.

Only 38% of directors said their company routinely checks that their grey fleet drivers have insurance cover for business use – that needs to change. 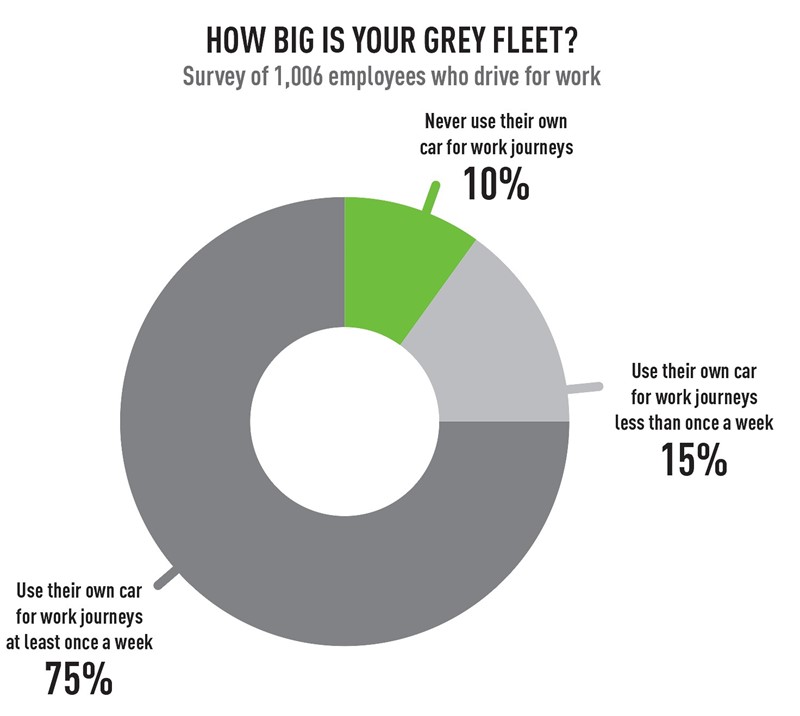 Often grey fleet is not part of the fleet management role at all. Sometimes it falls under HR or finance or is even ignored completely. Wherever it falls in your business, it is essential that the person responsible understands what it means and how to manage it.

With 90% of the drivers we surveyed classing themselves as grey fleet, failure to manage them is completely unacceptable from both a legal and moral standpoint and could present a serious and unexpected risk to both the directors and the business itself.

The good news is that managing grey fleet properly will bring financial benefits to the business, with likely improvements in productivity and reductions in mileage claims to name but two.

The main points to note are:

*    Grey fleet could be much bigger than we think.

*    Many directors do not understand their responsibilities for grey fleet.

*    Many companies are not following through with their stated policies on grey fleet.

*    Some companies could have a massive and completely unrecognised risk with uninsured grey fleet drivers – a third are not correctly insured.

*    Companies should be concerned at the potential number of grey fleet drivers who are driving poorly maintained vehicles.

Occupational road risk is a dual responsibility for both leaders and employees. Leaders need to be more aware of their responsibilities to all employees that drive for work, regardless of the vehicle they use. This means fully understanding their own responsibilities, communicating what is required of grey fleet drivers clearly and comprehensively, and having systems in place to ensure these requirements are met.

It is essential that grey fleet drivers are treated the same as company car drivers.

They should receive a copy of the company’s Driving for Work policy (a driver handbook is also a good idea) and also have their driving licences checked before they are allowed to drive on company business.

A key part of your grey fleet policy is that no employee should be allowed to drive on company business without having insurance cover for business use.

The fact that a third of business drivers could be uninsured needs addressing and the need for business cover must be clearly communicated. Many insurers will include cover for free or a nominal admin charge while some companies will insure the driver on their own policies.

For the avoidance of doubt, a business journey is normally classed as any journey other than commuting to and from an employee’s single main place of work and it makes no difference whether or not the journey costs have been reimbursed.

Many companies refuse to reimburse drivers for business mileage unless the required information is provided. It’s a simple policy and it works.

You can download DfBB’s Grey Fleet Review from its website featuring contributions from ACFO, Fleet News, Enterprise, BVRLA, Energy Saving Trust, FleetCheck and Selenity as well as details on how some of DfBB’s Business Champions address grey fleet.

Licence Check is backing a call by fleet body ACFO for enhanced grey fleet management services due to a rising number of grey fleet drivers.

How can employers make time to manage grey fleet?

By Richard Evans, head of business development at Jaama on Grey Fleet Management