In the spotlight: Volkswagen 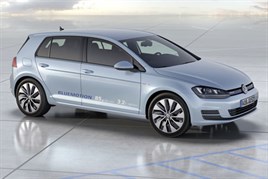 The Polo, Golf and Passat: three recurrent Fleet News Awards winners and a fundamental reason why Volkswagen leads the way in true fleet registrations. Such strength in these key segments has resulted in a greater proportion of Volkswagen customers on sole supply agreements than many rivals, albeit some of those sit under the VW Group of brands – Audi, Seat, Skoda and Volkswagen (cars and vans) – with Volkswagen in the dominant role.

And in the Golf Bluemotion, it has what is often described as the textbook fleet car, combining badge appeal with low running costs. It keeps both company and driver happy.

Heading the Volkswagen fleet department must be a cakewalk then, no? For 17 years it was the responsibility of the venerable Vince Kinner to pile up the orders while guarding against complacency. Since Kinner’s move to oversee back office synergies and administrative unification across the five group brands a year ago, the position of Volkswagen head of fleet has been in the hands of Michael O’Shea.

In a classic case of succession planning, O’Shea had worked in the fleet department as Kinner’s number two for the previous three years. As national fleet sales manager, he played a vital role establishing the current fleet strategy. O’Shea bats back any indolent suggestions that Volkswagen fleet is an easy game.

He points to the fact that fleets are more fluid than ever, while company car drivers are more adventurous in considering different models. You can no longer rely on being a brand for life. “There is zero room for complacency,” he says.

“We have to continue to develop our service model – that’s our fleet and business message.” It means stepping up in customer service, understanding fleets’ needs and over-delivering at each touch point with their drivers. The role of the franchised dealer is becoming increasingly important; they represent Volkswagen at driver level and are on the frontline for brand fulfilment.

Then there are the premium marques. A decade ago they barely registered on the fleet consciousness. Today, they are fighting aggressively in every sector of the corporate market with highly-competitive models featuring both badge appeal and low running costs. Sound familiar?

On paper, it would appear that Volkswagen has most to lose from the greater affordability and availability of the likes of BMW, Mercedes-Benz and even its sister premium marque Audi. “There has been a shift in true fleet with the growth of the premium brands,” O’Shea says.

“That’s there for good; they will continue to increase their place in the market.” Yet Volkswagen continues to more than hold its own. Golf fleet sales last year rose by 14% while the Polo hit a 20% rise in true fleet. Only Passat, due for replacement in early 2015, slipped back, posting a 31% fall in fleet registrations, although that performance was not dissimilar to most of its rivals in the shrinking family car sector.

Combined figures show an increase in true fleet sales of 2,689 (4%) in 2013 to 66,618, accounting for just over a third of Volkswagen’s total UK registrations. SMMT figures also reveal how the carmaker has reversed back out of rental after a conspicuous hike in registrations in 2012. Last year it dropped 5,815 units, a 23.5% reduction, to 18,948.

Rental now accounts for 17.5% of its fleet volume, down from almost 24% in 2012. It’s a figure O’Shea is comfortable with. “It is a brand decision to have a clear fleet sales channel strategy that is focused on appropriate short-cycle business,” he says. “We have a natural level for the Volkswagen brand regarding our used cars that strengthens the residual values of 12-month-old vehicles and also three-year-old vehicles. We are now at the right level.”

Motability, meanwhile, has grown significantly, from 11,755 to 19,033, which O’Shea says was a decision based on the three-year ownership cycle. “It’s a different mileage profile – around half that of a conventional user-chooser – so it’s 100% complementary business to manage the product lifecycle to protect and enhance residual values, and it means good aftersales retention within our retailers,” he explains.

So how does he account for the growth in fleet registrations last year in the face of intensifying competition from the premium brands? “My mindset is to develop our proposition to be the most compelling in the market. It’s about leveraging the Volkswagen product portfolio and being a one-stop shop for all fleets,” O’Shea says.

“Once we get beyond the fact that we are on the shopping list with the right product, it’s about offering the best service, from the showroom to being the easiest organisation to deal with. It’s about understanding where we add and detract value in the marketplace.”

O’Shea points to the public sector where Volkswagen enjoyed much success last year with the Polo. “We have put additional resource into public sector in the past couple of years with a dedicated public sector manager,” he says. “It’s about understanding the sector and adjusting to its needs.”

Recognising the opportunities offered by salary sacrifice also helped boost public sector sales. O’Shea expects it to grow further this year, benefiting Polo and Up in particular. So far this year, Volkswagen has seen a higher than anticipated rise in true fleet registrations; in the first six weeks alone it is up year-on-year by 7,500 units, growth of 20%.

O’Shea is forecasting a slowdown – although all bets are effectively off until the March plate-change. “We see slight growth in true fleet this year and also a slight growth for Volkswagen, but in the channels where we want to grow,” he says. “We have always been strong within the traditional corporate element of true fleet so we need to consolidate and strengthen that. But it’s within the SME local business where there are opportunities for growth and we are working with leasing companies and our dealers on that.”

The Polo, Golf and Passat will remain at the heart of Volkswagen’s fleet proposition, further strengthened by the enhanced Executive trim level for the Passat which boosts specification (leather, sat-nav) for no additional cost.

Models such as the Tiguan and Up will also play their part. O’Shea adds: “We have identified the 20 key touch points of customer experience and it’s about recognising where we can add more value. That might be supporting the person with that touch point, which could be a leasing company, for example. We believe we can move on every one of them.”