The Government has given the go-ahead for three new trials of self-driving vehicles, which are expected to reach UK roads by 2021.

Luxury taxi firm Addison Lee will lead one of them, called Project Apollo, to introduce an app-based, on demand ride-sharing service in London.

The consortium includes Oxbotica, the self-driving vehicle software company with which Addison Lee is already working to create a 3D map of Canary Wharf, in preparation for autonomous vehicles.

The third autonomous vehicle trial – Project CAV Forth – will take place in Edinburgh, where five autonomous full-size single decker buses will run a 14-mile service from Ferrytoll Park and Ride in Fife across the Forth Bridge to the Scottish capital’s Train and Tram Interchange.

The project aims to run buses every 20 minutes, accumulating 20,000 weekly journeys as a test bed for future autonomous bus services.

The bus will be Level 4 autonomous, which means that a driver will have to be on board at all times. 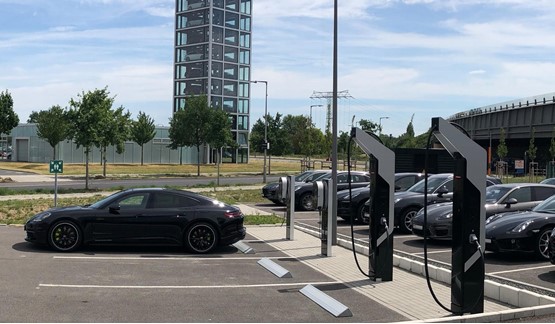 As befits a manufacturer focused on speed, Porsche has unveiled what it calls the ‘Porsche Turbo Charging’ concept for electric vehicles.

The company believes that by doubling the voltage of a charger to 800 volts it can more than halve the time it takes to recharge a battery. The result is a promised 250-mile range in less than 20 minutes.

DC fast-charging stations for electric cars normally operate at a level of around 400 volts, but Porsche has developed a Combined Charging System connector to split its 800V between two 400V plugs.

Four new charge points at the Porsche dealership on Berlin-Adlershof Technology Park have been installed, although vehicles will need a ‘combined charging system’ connector to take advantage of the high speed chargers.

Porsche says its new fully-electric Taycan, due in 2019, will be the first series production model to feature 800-volt technology, and that if this pilot proves successful the technology will be rolled out to other Porsche centres.

Addison Lee and UK autonomous driving tech company Oxbotica will be ready to put fully autonomous vehicles on the road in London by 2021, but UK legislation needs to move forward to make it possible.

Addison Lee has lost its an employment tribunal appeal following a previous ruling that drivers are entitled to national minimum wage and holiday pay.