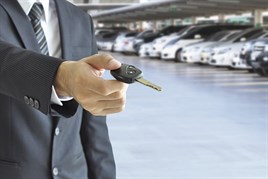 Following the need to replace an old pool car, Portsmouth City Council opened an AlphaCity account in May 2014 with Alphabet, trialling one vehicle shared between 25 staff. The council is now arranging to lease its second AlphaCity Car.

Fleet manager Michael Vickers says the biggest benefit has been reduced administration. “We have had quite positive feedback from staff,” he says. “They like the swipe card system for getting into the vehicle; the only negative feedback has related to the booking system, where people have had teething problems getting used to it.

“The biggest benefit has definitely been that there are no keys, and the booking system is clear and open.”

Vickers adds: “AlphaCity is a viable proposition for anyone replacing a conventional pool car. I think it will tempt more grey fleet users if they see how easy cars are to access.”

When it came to replacing its pool car fleet in April 2012, Aberdeen City Council partnered with Co-wheels to launch the Aberdeen Car Club: it now runs nine exclusive-use cars for staff and has taken on a further 14 vehicles for public use.

An Energy Saving Trust review found the partnership has created an annual saving of approximately £40,000 for the council, through efficient business usage and revenue generated from public use.

According to council spokesman Alan Simpson,  the business case has definitely been achieved and the scheme’s popularity among staff and residents is outstripping supply.

“Just by encouraging staff to use the car club, we  are instantly making carbon savings, without cutting mileage, and we are able to spend more time doing other work, rather than running around after cars.

“However, demand still outpaces supply for staff so we’re keen to fund more exclusive use vehicles, and around 31.4% of residents don’t have access to a car  so we want to help improve their opportunities.”

Richard Vincent, assistant director of estates and facilities at the Trust, has been particularly impressed with the account management, as well as impressive initial savings.

He says: “Enterprise has taken full control, which means no day-to-day management is required. It provides us with detailed management information and our account manager regularly suggests  travel improvements to save further costs and increase efficiencies.”

Vincent adds: “The ease of using the scheme, combined with the fact that Enterprise ensures the cars are constantly clean and presentable, means take-up has been beyond our initial expectations.

“In a few short months it has proven to be  more economical than grey fleet and we’ve already seen savings of up to 20% compared to mileage  reimbursement.

“It has been a fantastic tool to help us make  significant financial savings along with CO2 reduction, efficiency improvements and the removal of duty of care liability.”

Most popular articles in Fleet rental