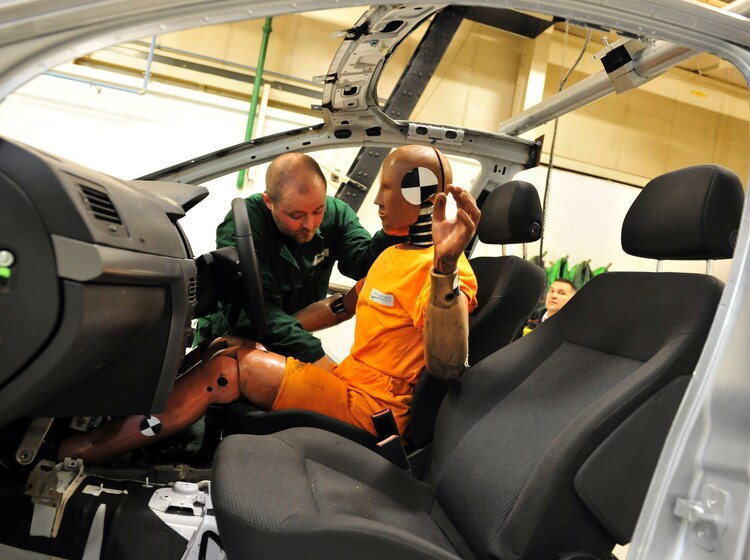 Hidden away from view in a nondescript building in the Bedfordshire countryside is the latest weapon in the war on road safety.

A crash test simulator, it uses compressed air under extreme pressures – up to 3,000psi – to recreate the forces experienced in a collision, and is the first of its kind in the UK.

It is the latest addition to the custom-built facilities at Millbrook Proving Ground – one of Europe’s leading independent technology centres and home to Fleet News’s Company Car in Action event.

Called a servo sled, it simulates a crash so that the effects on its occupants can be measured via sensors fitted to crash test dummies. It recreates frontal, off-set and side impacts, providing vital data to highly-skilled engineers, whose ultimate aim is to improve driver safety.

Leading the charge to improve vehicle safety is Matt Hillam, head of crash test engineering at Millbrook. “There’s an awful lot going on to improve driver safety,” he says. “Organisations such as Euro NCAP have pushed the bar higher. You only have to look at early NCAP footage to see how much has changed.”

Legislation has helped drive the majority of improvements to vehicle safety, but there has also been a recognition of the value of road safety ratings by consumers, including company car and van drivers, and fleets.

“More manufacturers are choosing to use the safety rating in their marketing material and fleets are beginning to use a minimum requirement for their choice lists,” explains Hillam. “People are becoming more interested in the relative safety of a particular vehicle.”

Millbrook works across the transport sector, testing parts for the automotive, rail and aerospace industries. It has a range of crash test facilities at its disposal, including a drop tower, a pendulum rig for instrument and panel testing, a pedestrian test facility and a recently updated seatbelt anchorage rig.

However, it is the new servo sled, installed earlier this year, that is revolutionising the way its engineers work by improving the accuracy, repeatability and correlation of test pulses – those different forces at play – to a real crash. “We were starting to get a lot of queries about being able to deliver an acceleration pulse that far better matches a full-scale crash pulse,” says Hillam.

The new equipment replaces an older simulator, known as a HyGe sled, and has a maximum velocity of 56mph and a peak acceleration in excess of 80g.

It uses a servo-actuated braking system to control crash pulse correlations which have been captured by accelerometers fitted to a vehicle during a full-scale crash test.

“It’s a way of capturing how the vehicle is deforming and crushing,” explains Hillam. “Most manufacturers are trying to make that a relatively long, gentler, low level , but most people don’t want a vehicle with a bonnet which is 12 feet long.

“At the moment, style dictates that it’s relatively short and usually there’s a powertrain in there of some kind, so you’re trying to make all that structure that has a technical function crush correctly during impact.”

With just a few key strokes, the computer-controlled crash pulse can be changed on the upgraded sled, unlike the old simulator, which was commissioned in 1970 and required partial dismantling to change a metering pin.

Thanks also to the expansion of the test preparation areas, the new servo sled system can achieve much faster turnaround times. Previously, it could take up to an hour-and-a-half to charge the HyGe sled with compressed air, now it can charged in around a minute, meaning customers can be offered more tests per day to complete their test programmes in less time.

“We test all sorts,” says Hillam. “We’re working for automotive, rail, aerospace and heathcare with wheelchair accessible vehicles, as well as airbag and seating suppliers.

“We even do weird and wonderful things like testing taxi cab signs that sit on the top of a taxi.

“Not all tests are equal – some tests are small and some are big.”

To complement the new sled, Millbrook has also invested in the latest high-speed, high-definition camera equipment to improve the quality of the images taken when capturing test results.

Hillam would not divulge how much the business had invested in the new crash test facilities. But he is excited about how much they will improve engineers’ understanding and road safety.

So does he think there will come a time when the occupants of a vehicle will be completely safe? Perhaps.

“We’re moving towards a time with increased autonomy where vehicles will have a degree of self-learning and a level of artificial intelligence that stops them having the accident in the first place,” says Hillam.

However, he adds: “I’m an engineer; I could never guarantee safety.”

View from the test chamber

The skeleton of the front half of a car sits on a set of rails which stretch one way down the length of an industrial warehouse.

Running in the other direction is a heavy duty industrial pipe, the type you may expect to find at a major oil refinery. It comprises two lengths which are bolted together, with the section closest to the vehicle body housing a piston. It is here where the compressed air is first stored and then released to propel the piston and sled, recreating the forces involved in a collision from the point of impact.

Two engineers are busy lowering a crash test dummy into the frame of car, while checking a series of sensors and recording equipment.

Either side stand two steel frames housing a wall of high-powered lights to help illuminate any one of the 16 high-definition cameras available, which can record at 1,000 frames per second.

A high pitch beep sounds signalling the start of the test and the need to evacuate the test chamber. Doors are locked and double-checked before a whoosh of banked air starts charging the system.

The pressure can be increased to a maximum of 3,000psi, but our test is at 2,060psi, recreating a 35mph frontal collision.

Peering through a reinforced glass window at one end of the test chamber, the engineer in charge issues a ‘firing’ warning. The sled is now illuminated by a wall of light and a loud siren sounds as the countdown commences.

It’s all over in the blink of the eye.

The compressed air is released, allowing the forces at play in a real-life collision to be recreated through a sophisticated braking system hidden within the sled. It’s only when you watch the high definition footage back in slow motion the different forces can be properly observed and understood.