With the number of cyclists on UK roads increasing, public sector fleets are turning to driver training and technology to reduce accidents involving their vehicles and vulnerable road users. 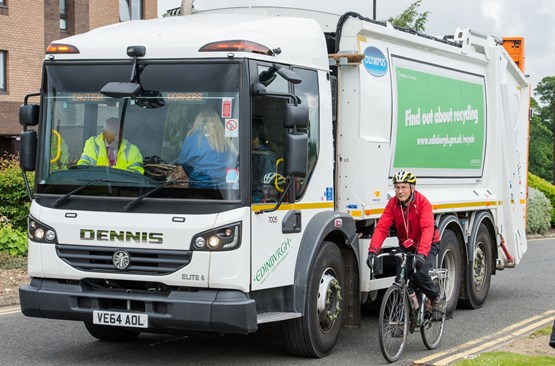 Cycling is undergoing a renaissance. The rise of the Mamil (middle-aged man in lycra) has coincided with a push to encourage more people on to bikes to promote exercise and reduce congestion on the UK’s roads.

It is estimated that around five million people cycle three or more times a week, with more than 15m getting on their bikes at least once a month.

This could be set to rise dramatically as the Government, which launched its cycling and walking investment strategy earlier this year, has pledged to double cycling activity by 2025 by making “cycling and walking the natural choice for shorter journeys”.

However, while cycling has many benefits, it is also full of danger: Department for Transport figures show that in the 12 months leading up to September last year, 3,340 cyclists were killed or seriously injured in the UK.

Transport Research Laboratory figures show that 75% of accidents involving cyclists occur within urban areas, meaning cycle safety is growing in importance for public sector organisations that operate primarily in towns or cities. “It is a real issue for us,” says Monica Guise, sustainable logistics manager at the University of Birmingham, who, as well as managing its fleet and campus logistics, is also responsible for encouraging cycling across the city.

“It is important we look at this in a holistic way and that our fleet is able to be driven with cyclists and pedestrians in mind.”

To do this, the university sends its drivers on safe urban driving courses held by cycle training organisation Bike Right, which includes drivers cycling through Birmingham city centre to gain first-hand experience of the challenges faced by cyclists.

“When we first put the drivers on the course they were very sceptical,” says Guise. “Some of them hadn’t been on a bike for 30 to 40 years.So one of the first things we had to do was teach them to ride a bike again.

“There was also a lot of ‘oh, I don’t think I fancy it’ and ‘oh, I can’t, I’ve got to go off and do something else’, but they come back really quite exhilarated and proud of themselves that they’d managed to ride through the city centre.

“It also got them thinking ‘wow, it’s quite dangerous, but I understand how those cyclists feel’, and it makes them more aware of how much space they should give them.”

It also helps make the drivers aware of a vehicle’s blind spots and instances when a driver cannot see a cyclist in their mirrors.

“Until you get the drivers on a bike they do not really appreciate the feeling of riding through a congested city centre and it’s not until you do that that you appreciate how important it is to be seen,” says Guise.

“Would I recommend on-bike training? Without a doubt. We’ve found that our drivers’ attitudes are definitely changed by it.”

The safe urban driving course used by the University of Birmingham has been developed by – and is accredited to – the Fleet Operator Recognition Scheme (FORS).

So far, more than 23,000 drivers – from the public and private sectors – across the country have been on the FORS programme, which meets the Construction Logistics and Cyclist Safety (CLOCS) standard, as well as requirements of managing work related road risk.

The seven-hour course – split evenly between theory and practical content – also counts towards the 35 hours of driver certificate of professional competence (CPC) training that lorry drivers need to complete every five years.

City of Edinburgh Council has worked with Cycling Scotland, the country’s national organisation for the promotion of cycling, to develop on-cycle training sessions for its drivers.

Employees returned to the classroom to learn about vulnerable road users, including pedestrians, motorcyclists and scooter riders as well as cyclists, and how best to share the road with them.

A second element to the course gave participants the opportunity to develop their own cycling skills, which enabled them to develop driving plans to ensure other road users’ safety.

Lesley Hinds, transport convener for City of Edinburgh Council, says: “The council is committed to promoting cycling as a primary mode of transport, but if we are to encourage cycling among our citizens we must ensure that they are given a safe and accessible environment in which to do it.

“By raising awareness of this with our drivers, we are leading the way to creating an equal relationship between drivers, cyclists, pedestrians and other road users alike.”

Keith Irving, chief executive of Cycling Scotland, adds: “It is especially important that any organisation operating HGV vehicles ensures that they are operated safely and with utmost consideration of other road users.

“Education and practical training are essential to generating mutual understanding by putting lorry drivers in the position of those who travel by bike, both in theory and in practice, so that they are much more aware of people on bikes while on the road.”

Guise says that while a culture change needs to happen for some drivers, cyclists should also take responsibility for improving safety.

“A lot of improvement has to come from drivers, but there is a lot to come from the cyclists as well,” she says.

“Cyclists may not be aware of where the blindspots are for a vehicle, and we see some speeding along, criss-crossing across traffic, so there’s almost a need to take it one step further and educate cyclists about urban driving.”

THE TECHNOLOGY THAT HELPS FLEETS SAVE LIVES

Ealing Council last year won two awards for its work in developing a new lorry safety system which warns drivers when cyclists and pedestrians are likely to collide with a vehicle.

The Cycle Safety Shield uses cameras to filter out inanimate objects, such as bus stops and fences, to monitor and detect only pedestrians, cyclists and motorbikes and eliminate blind spots. An alarm warns the driver if they get too close.

A trial of the system in 2013 and 2014 found 15 potentially serious collisions with vulnerable road users had been avoided. It is now being fitted on all of the council’s large goods vehicles. The system won both the fleet safety analysis and action category at the Brake Fleet Safety Awards 2015 and the best innovative transport city honour at the Transport Innovation Deployment for Europe event.

Bassam Mahfouz, cabinet member for transport and environment at the council, says: “This innovative piece of kit, installed on Ealing vehicles, makes such a positive difference.”

City of Edinburgh Council is also using technology to boost cyclist safety. It has integrated Cyclear’s system into its 40-plus fleet of waste and recycling trucks, as well as 360-degree CCTV hard disk recording equipment.

Cyclear comprises an illuminated sign that lights up to alert anyone travelling towards a vehicle when it is turning left, and a speaker announcing the manoeuvre for additional warning.

Sensors on the side of the vehicle also detect when a cyclist travels alongside it, alerting the driver with an audible message. The system will operate and detect a cyclist if they undertake a lorry, should the illuminated sign not be activated.

The hard disk recording system can accommodate up to 16 cameras and two audio inputs. Lesley Hinds, of City of Edinburgh Council, says: “This equipment has been well received by drivers and crews and is performing well.”