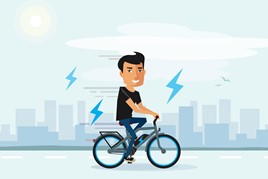 Shifting short journeys away from the car to other modes of transport is a huge challenge facing local authorities.

Conor Walsh of the shared mobility organisation CoMoUK suggests that “convenience dictates people’s choice of travel” and part of the problem for cities is that the car offers “a high level of convenience”.

To help change behaviour, Transport for Greater Manchester (TfGM) has introduced a range of initiatives, including investing in electric bikes and charging infrastructure, and teaming up with Olympic gold medallist Chris Boardman to promote cycling.

Rafael Cuesta, head of innovation at Transport for Greater Manchester (TfGM), says that having a champion like Chris Boardman is key for any transport innovation project in order to make ideas a reality and to increase the speed of change.

TfGM has an aspiration to invest £1.5 billion in cycling and walking infra-structure. It has already secured £160 million of its £500m Transforming Cities Fund for walking and cycling.

“It’s a huge investment that we’ve never seen in GM,” Cuesta says. “It has given us the opportunity to really bring solutions.”

Cuesta also highlights the importance of improving the digital experience for users to change behaviour and TfGM is taking part in two European projects: IMOVE and MaaS4EU, using Fleetondemand’s technology.

Shared mobility is a “key part of the toolbox” for first- and last-mile journeys, according to Cuesta. TfGM plans to expand the city’s car club as it has the potential to remove a number of private cars from the city’s roads. Equally, autonomous vehicles have an important part to play in first/last mile. TfGM has a project linking Stockport station to Manchester Airport and is partnering with Salford University to operate an autonomous vehicle first on campus and then on public roads in the next year to 18 months, subject to regulation.

TfGM believes autonomous vehicles could also be used in the future in conjunction with the tram network to take commuters from a tram stop to a neighbouring business park.

The knock-on effect of reducing private car trips and congestion is that freight and delivery journey times are more reliable.

TfGM has been brainstorming solutions for logistics movement as part of its Triangulum project on the Oxford Road Corridor.

Cargo bikes, provided duty of care obligations are met, are one solution as trials suggest that they could be a more efficient delivery option than vans in congested city centres.

Telematics can also be used to speed up deliveries in city centres through better routing and under-standing of the data generated, and global projects are underway.

Geotab, for example, is working with Amazon and OEMs to understand the kind of data that comes from electric vehicles (EVs) fitted with telematics as well as range anxiety and how the EVs can be used in urban environments to get goods to people faster.